The Papua New Guinea MP, Davis Steven, who resigned as justice minister yesterday, says the country has to seriously rethink how it goes about government business.

As well as announcing he was resigning to concentrate on his electorate, the Esa'ala MP revealed he has deep concerns with the current state of governance.

Mr Steven said critical steps were required to reposition the nation's future, and that more than ever systems of governance needed to be strengthened.

According to him, the rule of law is at stake with systems and process that are weak, easily undermined and compromised by those in leadership.

The MP, who was also the Attorney-General, said the law and justice sector needed to be taken seriously or the country would regret its ignorance.

Noting weaknesses in PNG's laws and enforcement agencies, Mr Steven said reforming all sectors of government required political will and a central government system that prioritised the rule of law.

"For me the issue is consensus at the top level now, for us to look beyond the usual business where we're opening roads and bridges, but to really sit down and think about the issues that we have before us and how we can address them.

"What I'm saying is: we may be busy, but busy doing what?"

Mr Steven said he was also concerned about lingering issues of how the government was managing the interests of the country's resource owners in the development process. 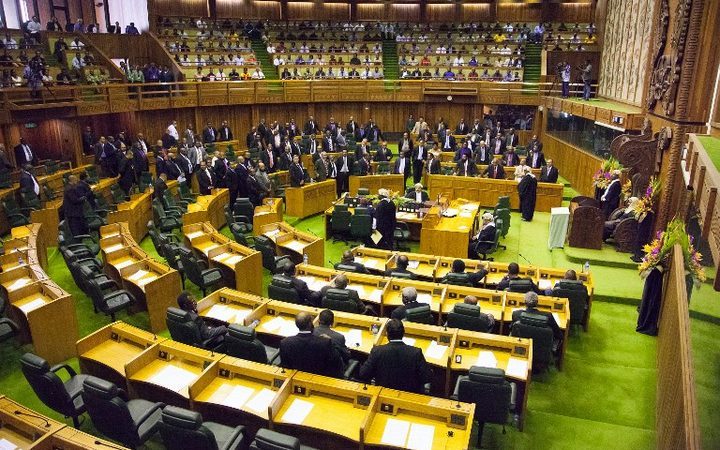 Mr O'Neill said the MP had spoken with him in recent times and discussed resigning to focus on his electorate which he says is still rebuilding from earthquake damage.

"The region is still rebuilding after the earthquake and there is a lot of work to be done," Mr O'Neill said.

While PNG experienced a major earthquake disaster in the Highlands region early last year, as well as significant aftershocks, the disaster was mainly confined to the Highlands.

"His people are suffering and as their elected Member he is focusing on rebuilding communities," Mr O'Neill said.

The prime minister said Mr Steven had the government's full support in these ongoing efforts, and thanked him for his service as minister.

"Davis Steven has served admirably in two ministerial portfolios, first as Minister for Civil Aviation in the last Parliament, and Minister for Justice and Attorney General since the 2017 election.

"He has initiated a number of reforms in both portfolios."