An inquiry into an alleged police mutiny in Vanuatu has been adjourned until next month after confusion over who the prosecutor was. 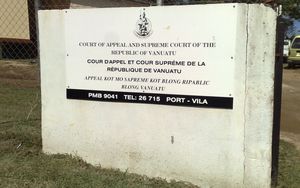 The case was to begin on Monday but hit a snag when a New Zealand lawyer appeared in court to take the case.

When the acting public prosecutor John William Timakata arrived in court, he found Christopher Griggs there ready to argue the case.

Confusion reigned over who the prosecutor was, so the judge adjourned the case until February 13 so it could be resolved.

Mr Griggs was appointed last August by the then acting police commissioner to prosecute an alleged mutiny case against former commissioner Joshua Bong.

But two weeks ago, the internal affairs minister said Mr Griggs was a prohibited immigrant.

The attorney general, however, says the New Zealander doesnn't require a work permit to prosecute the case because Mr Griggs was appointed to provide a service, and not as a government employee.

Meanwhile, Joshua Bong has filed an official complaint against Mr Griggs, saying he is not a registered to practice law in Vanuatu.