The leader of the FijiFirst Party, Frank Bainimarama, says the country's new democratically elected government is a legacy of the military. 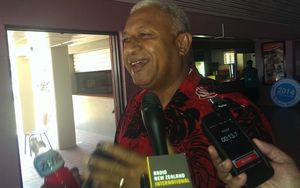 The leader claimed victory in the country's landmark election on Sunday and said his FijiFirst party had gained 32 seats in the 50-member parliament.

He told hundreds of party supporters who gathered at a stadium in Suva he was humbled and he promised he would govern for the well being of all Fijians.

The former military commander acknowledged his family and then the military for their support, referring to the year of George Speight's coup and a subsequent mutiny by rebel soldiers.

"I want to thank the officers and the rank and file of the Republic of Fiji Military Forces who have unwaveringly stood by me since the events of 2000 and who have stood for the ideal of true democracy," he said.

"I wish to publicly acknowledge and thank them for their camaraderie, their vision, their perseverance and their sacrifice. It is their legacy that today we have a democratically elected parliamentary government under an internationally acclaimed constitution with a vast array of civil, political and socio-economic rights and that will deliver good governance and transparency."

With the Sodelpa party holding 28 percent of the vote, and the National Federation Party just above the parliamentary threshold on 5.4 percent, Rear Admiral Bainimarama had this message for his opponents.

He told his supporters there would be renewed fervour to meet the needs of ordinary people.

"We intend to ride the current wave of economic growth that is certain to now increase even more."

He planned to improve services, create more jobs and continue with infrastructure building.

Rear Admiral Bainimarama says the new cabinet will be decided in the next couple of days.

The first sitting of parliament is expected within fourteen days of the announcement of the results due on Monday.