The French High Commissioner in French Polynesia is defying the supreme court, saying he won't enforce its order against the territory's president because he may be pardoned by Francois Hollande.

Last week, France's highest court upheld a corruption conviction against Gaston Flosse, which ends all his mandates as an elected politician for three years.

The verdict was immediately sent to the High Commissioner, Lionel Beffre, in Tahiti but he has so far refused to notify Flosse, which is the official step needed for it to be enacted.

Flosse has maintained he is innocent, and to stay in office, he has sought a presidential pardon. 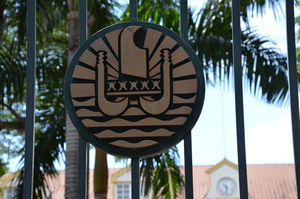 Mr Beffre says with the pardon appeal now lodged, it is best to put off a move against Flosse until the French president has made a decision.

Mr Beffre has been reported to police by a citizen, Yves Conroy, for ignoring the court ruling.

Mr Conroy says in 1999 he lodged the original complaint against Flosse for abusing his office and waited for more than 14 years and seven months for justice to be done.