The Canadian mining company, Nautilus Minerals, is set to begin mining the seabed off New Ireland for metals, following a dispute resolution with PNG's national government. 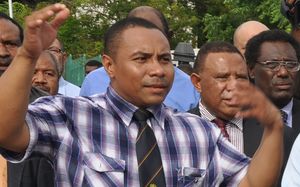 It will be the first time metals, such as copper, will be mined from the seabed anywhere in the world.

Mr Chan says the public have been made aware of the project.

"My constituents have been continuously consulted. So the people are well aware that the project will go ahead."

Byron Chan says the government should take at least US$124million from the mining project.