A Vanuatu businessman says a proposal to unload Chinese fishing vessels in the middle of Port Vila habour will have a negative impact on tourism and poses a threat to the environment. 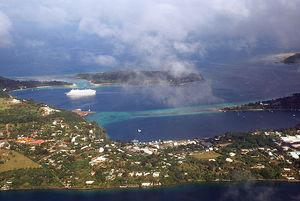 The manager of Total Marine Solutions, Peter Wederell, says there are concerns thousands of tourists will have to walk past the smell and mess of fish coming into port next to cruise ships.

He says a fish factory at Blacksands has lain dormant for years as the vessels have nowhere to unload their catches.

"Now in scrabbling desperation the company which is a joint venture between the Chinese government and Vanuatu have come up with a proposal to use two derilect coastal traders here which were built in China for the Vanuatu government to support a floating pontoon to unload these, up to forty, longliners that are supposed to be coming here." 17

Peter Wederell says the situation is compounded by the ad hoc redevelopment of wharves in Port Vila used by local inter-island trading vessels.