A delivery driver in Paris who died after a traffic stop in January was heard shouting "I'm suffocating" in footage seen by French media. 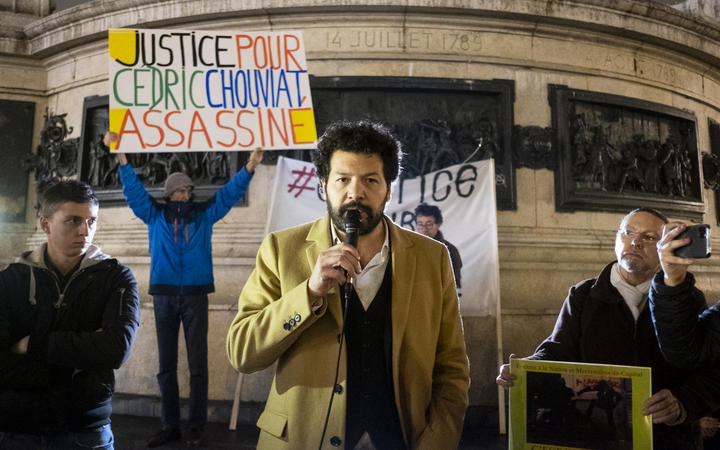 Cédric Chouviat, a 42-year-old father-of-five, reportedly said he couldn't breathe seven times in 22 seconds as the officers appeared to pin him down.

Four police officers have now been questioned over his death in January.

He died in hospital two days after the arrest. A coroner later ruled he'd died of asphyxia and a broken larynx.

The officers have previously said they stopped Chouviat for looking at his phone while riding his scooter, and for having a dirty licence plate, French newspaper Le Monde reported.

Investigators will now decide whether the four officers should be charged over the death.

None of the police officers involved in the case have been suspended. Their lawyer Thibault de Montbrial declined to comment on the latest reports, AFP news agency reported.

According to witnesses who spoke to Le Monde, the police officers held Chouviat in a chokehold - a controversial and potentially deadly form of restraint that is outlawed in many countries.

Chouviat was a father of five. His family has accused police of using "dangerous" restraint techniques, and said the violence against him was unjustified.

This month, mass protests against police brutality have been held all over the world, after the killing of George Floyd by police in Minneapolis. In a parallel with Chouviat's pleas for help, Floyd was also heard saying "I can't breathe" as a police officer knelt on his neck.

In France, young Black and Arab men say they are disproportionately the victims of police brutality.

Following protests, the French government announced this month it was banning the potentially deadly chokehold technique.

However, they reversed this decision just a few days later after a backlash from police unions, who held demonstrations across the country.