A justice advocate and barrister has said police should never use force for minor crimes, in light of a video of four police officers holding down a young man who was caught tagging. 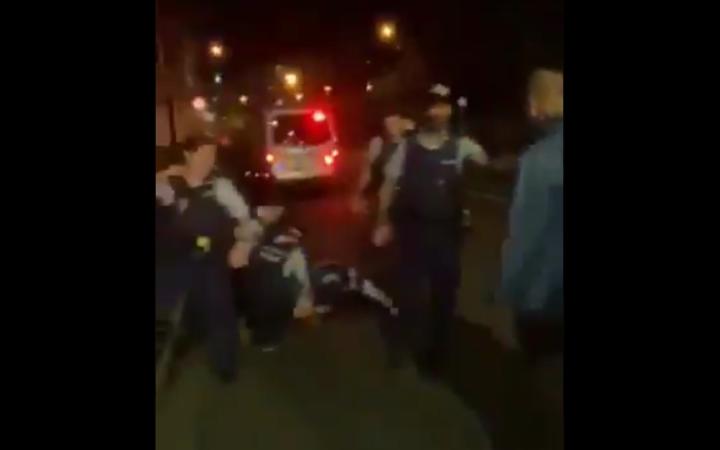 Nikau Andrews, 26, has been recovering in hospital after being caught by police tagging a wall in Hopetoun St, Newton.

He said the arrest left him with lacerations on his face, bruises on his head, and a possible chest injury.

She said the man fled officers after being seeing tagging a wall and violently resisted arrest.

The Independent Police Conduct Authority is investigating the incident.

Manukau barrister, and youth justice advocate Kingi Snelgar said it was not appropriate for four officers to be lying on such a small man.

"It seems pretty concerning, the behaviour of the police, and I think with the Black Lives Matter movement and more scrutiny on police, we're going to be seeing more of these type of videos.

"When police and our society are under the microscope now in terms of how we use force, and with cameras, every single decision, rightly so, should be scrutinised."

Snelgar said police could have just walked away, instead of escalating the situation.

"My view is that we need to stop heavy policing of minor crimes, resulting in mainly Māori entering the justice system and being caught up... so things like tagging, it just shouldn't be resulting in that kind of force."

But former police officer, and former head of the government's justice advisory group, Chester Borrows, said there was no one rule for how force was applied, as it was "very difficult to find an objective measure case-by-case".

"Just because the initial offence might be trivial, like tagging, it doesn't discount that it's escalated by the way that person behaves."

"You might stop someone for shoplifting, they may respond violently, you might end up dropping them on the floor of the supermarket and applying the handcuffs to them - in the end, it may look like that was pretty heavy handed for shoplifting, but it wasn't the shoplifting, it was actually the resisting," Burrows said.

However, he said he would like to see body cams standard across police in order to verify the conduct of officers as well as suspects.

Borrows cautioned against people jumping to conclusions based off the video, as context was crucial.

He said compared to other police services across the world, New Zealand Police were good at finding non-violent alternatives to dealing with suspects.

"I think we do pretty well in terms of use of force and our abilities to negotiate, de-escalate, take people into custody without the use of force, I think that's pretty good in this country compared to others."