"You know it's real when the trans girls are out protesting. Ya'll know it's unsafe out here for us," Jaycee Tanuvasa tweeted on the day of the first Auckland march of solidarity with Black Lives Matter. 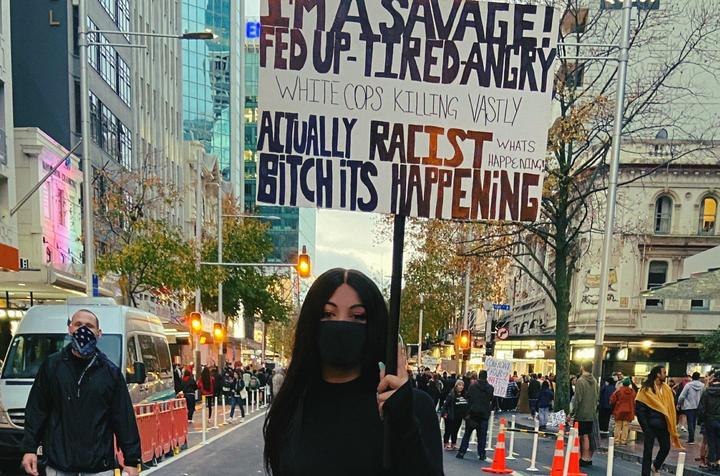 A pink, blue and white striped placard could be seen among the crowd of thousands.

Tony McDade was the 12th trans person reported to have been killed in the US this year. He was shot dead by police two days after George Floyd.

McDade's death has not garnered a lot of media attention, and local news reports that did surface misgendered him.

No charges have been laid against the officer that fired the lethal shot. The Police Benevolent Association are fighting to keep that officer's name a secret and Tallahassee police have not released bodycam footage from the night, despite eye-witness accounts appearing to contradict those of the authorities.

The murder of trans people often goes misreported in the US, if reported at all.

In the past week alone, two Black trans women were brutally murdered within hours of each other - Dominique "Rem'mie" Fells in Philadelphia and Riah Milton in Ohio.

"Black trans women are not safe. Black trans lives are in danger not just by the system, police officers and racists, but by Black men," Jaycee tells RNZ.

"I was there (at the march) for All Black Lives, that includes Black trans women," she says.

"As much as this is a fight specifically for Black human rights, the apple doesn't fall far from the tree in my life. Fighting for Black rights is also a fight for my rights as a brown person." 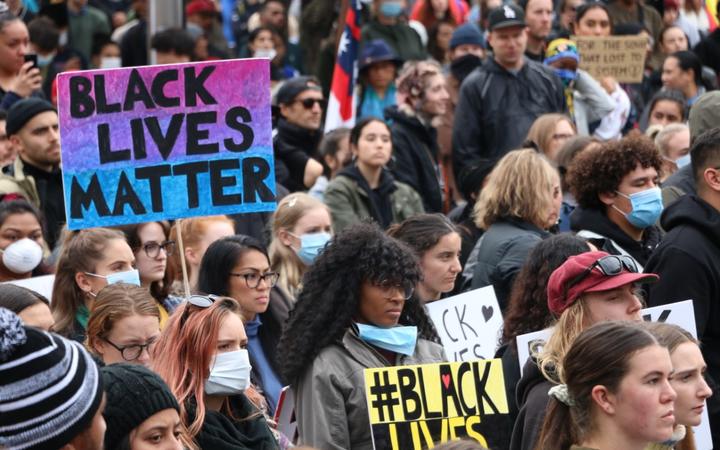 'It's unsafe out here for us'

Trans women do not have many allies, Jaycee says.

Without them, trans women depend on each other for safety. "Which is why my girls and I turned up to the protest together.

"A lot of the time our safety relies on the ability to pass as cis women in society because being clocked out as trans comes with violence and we can't confidently depend on the public and police officers to protect us so we do our best to protect ourselves, even if it means to present a certain way."

Jaycee says as a brown trans woman in New Zealand, she does not often feel safe in the presence of police officers and she and her friends have had many questionable encounters with male officers.

Among these, Jaycee has been misgendered and asked for her birth name even though her name is legally recognised.

Despite trans people having the legal right under the Human Rights Act and the Bill of Rights to have their gender respected, those who have been detained, held in custody, arrested or charged by police in New Zealand have reported various negative experiences.

Almost one in 10 say they were assaulted or harassed by police because they are trans.

Forty-two percent say police knew their correct name, pronoun or gender but would not use it.

More than half were not given a choice about whether a male or female officer searched them, despite it being their right.

Instead, as reported previously by RNZ, recruits are presented with scenarios and role-plays that are meant to represent LGBTQI people.

In daily life, personal safety is a major concern when you're trans.

Jaycee says a friend of hers who is trans was jumped and thrown down stairs by a couple of club bouncers. Police didn't lay charges.

Even waiting for or using public transport feels unsafe for 40 percent of trans people.

There's an intrinsic resilience in trans communities that's born out of necessity.

"I think there's a flame installed in us that doesn't sit well with not being able to be ourselves authentically," Jaycee says.

"We crave happiness and joy and we find that in living in our truths. So resilience comes from self-love and knowing our worth, what we deserve...

"Trans women have existed since the beginning of time. Transgender is a modern western medical term but the meaning and the people have always existed and are known in most pre-colonised cultures as Sharmans of our islands. I know Indigenous cultures have their own terms that represent trans people, third gender and gender fluidity in their cultures, for example Samoa has Fa'afafine. The proof is in our language."

She says finding her support system - her blood family and her chosen queer family - and taking care of them as much as they would do for her was the best thing to continue building resilience. But she understands not everyone has the privilege of family, and encourages people to reach out to support services like ME Family Services and Village Collective.

"That being said, society needs to do better in supporting us, hearing us and treating us with the same love and kindness they do others, that way we can navigate this world with the same opportunities and feel safe," she says.

"Transgender people are a part of this world and we will continue to grow and reclaim. Hear us, support us, love us and most importantly protect us."