Seattle's mayor has said the city plans to take back a district that is being occupied by armed protesters, after three people were shot at the weekend. 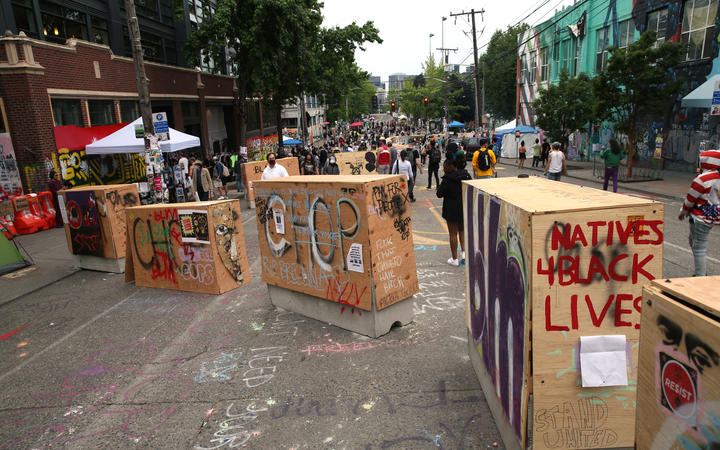 Barricades erected by the city several days ago divide up the CHOP zone in Seattle. Photo: AFP or licensors

She said the city would work with the demonstrators to end the so-called Capitol Hill Occupied Protest zone.

The city centre zone was taken over by protesters on 8 June after police withdrew following violent clashes.

What did the mayor say?

Mayor Durkan, who has been under growing pressure to crack down on the protest zone, told a news conference on Monday the city police department would return to its precinct "peacefully and in the near future".

"The cumulative impacts of the gatherings and protests and the night-time atmosphere and violence," she said, "has led to increasingly difficult circumstances for our businesses and residents.

"The impacts have increased and the safety has decreased."

Her announcement followed a shooting on Sunday night at the edge of the zone in the Capitol Hill neighbourhood.

The 17-year-old victim, who was shot in the arm, refused to speak to the police.

In another shooting early on Saturday, a 19-year-old man died and a 33-year-old man was left critically wounded.

At Monday's news conference, Police Chief Carmen Best said her officers had been confronted by a "hostile crowd" after the Saturday attack that hampered emergency workers as they tried to reach the victims.

She said that since the East Precinct had been abandoned, rapes, assaults, burglaries and vandalism had been reported in the area.

Mayor Durkan was asked during an interview on CNN this month when the authorities might retake the zone.

She replied: "I don't know, we could have the summer of love!"

According to local media, the area is largely peaceful during the day, with people relaxing in the park while volunteers hand out free food.

It spans a six-block radius of the city's trendy arts scene that has been gentrified in recent years as tech workers drove up property prices.

Protesters have planted a community garden and painted a large "Black Lives Matter" mural on the street.

But at night, the area is said to become tense as demonstrators march and openly armed watchmen patrol the streets.

How did the protest zone come about?

The protests in Seattle in Washington state began in response to last month's death in police custody of an unarmed black man, George Floyd, in Minneapolis, Minnesota.

The area around East Precinct in Seattle became a battleground between protesters and police at the beginning of this month, leading the governor to send in the National Guard and the mayor to impose a curfew.

The mayor finally ordered barricades to be removed near the precinct and the police building was boarded up.

President Donald Trump, had threatened to "take back" the city, but Mayor Durkan and Washington Governor Jay Inslee, both Democrats, told him to mind his own business.