Twitter has labelled a video tweeted by US President Donald Trump as having "manipulated media" for the first time. 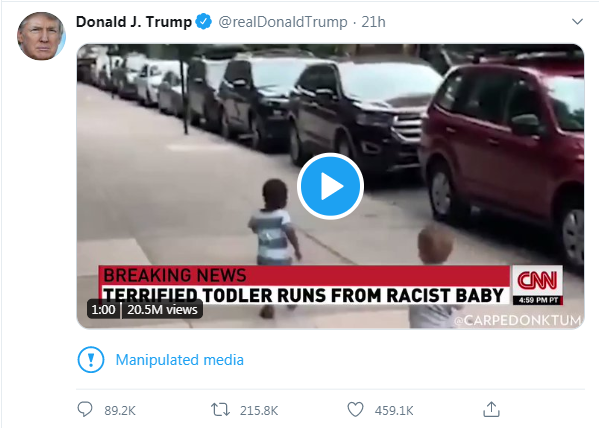 The president's tweet is now annotated with a warning about the edited video Photo: Supplied.

The video shows a black child running away from a white child while playing, with a fake CNN caption.

Twitter's decision to place a large warning label on the video is the latest escalation in a row between Twitter and the president.

In late May, Twitter added fact-checking verification notices to the president's tweets for the first time, following up two days later by hiding some of his tweets behind a warning.

Trump responded by signing an executive order that seeks to curb the long-standing legal protections of social media firms.

This latest warning is the first time Twitter has used the "manipulated media" warning on one of the president's tweets - designed to indicate the photo or video has been significantly edited.

It also comes at a time of increased racial tension in the United States and the resurgence of the Black Lives Matter movement.

After the initial shot of the children running, another caption appears: "Racist baby probably a Trump voter."

It then cuts to text promising "what actually happened", showing the original context of the two children at play - as CNN did in its original report in September of last year.

"America is not the problem. Fake news is," the video declares before it ends.

But clicking on the prominent warning that Twitter attached to the tweet brings users to a page where Twitter warns: "The president shared a version of the video which many journalists confirmed was edited and doctored with a fake CNN chyron."

CNN's communications department also tweeted back at the president with a terse response.

"CNN did cover this story - exactly as it happened. Just as we reported your positions on race (and poll numbers)," it wrote.

"We'll continue working with facts rather than tweeting fake videos that exploit innocent children. We invite you to do the same. Be better."

CNN did cover this story - exactly as it happened. Just as we reported your positions on race (and poll numbers). We’ll continue working with facts rather than tweeting fake videos that exploit innocent children. We invite you to do the same. Be better. https://t.co/T1nBtejZta

A watermark on the video in the president's tweet indicates it was originally made by a pro-Trump Twitter user who goes by the name Carpe Donktum.

"Thanks CNN, you gave my video three top 20 (two top five) trending spots," he wrote. "I haven't had this much fun since you freaked out about the Time Magazine cover!"

Twitter has doubled down on its efforts to fact-check misinformation amplified by President Trump in recent weeks.

It previously had a more hands-off approach - one that Facebook still favours, although Facebook did remove Trump campaign adverts that featured a Nazi symbol yesterday.

One problem for Twitter, however, is consistency. It remains unclear why some misinformation promoted by the US president is tagged, while misleading claims from him and other large Twitter accounts are left unchecked.

It's also worth pointing out that this is a clear attack on CNN. The media organisation has frequently found itself a target of Trump's cries of "fake news". But in recent weeks its journalists - and those from other outlets - have also been the target of physical attacks during protests sparked by the death of George Floyd.

Here, the issue of "fake news" quite obviously comes back to President Trump, though. He is plugging it to his millions of followers online.