The cold-blooded murders of 24 women, children and babies at a hospital in the Afghan capital was horrific enough. But as Frederic Bonnot made his way through the bullet-riddled maternity unit, he realised something more. 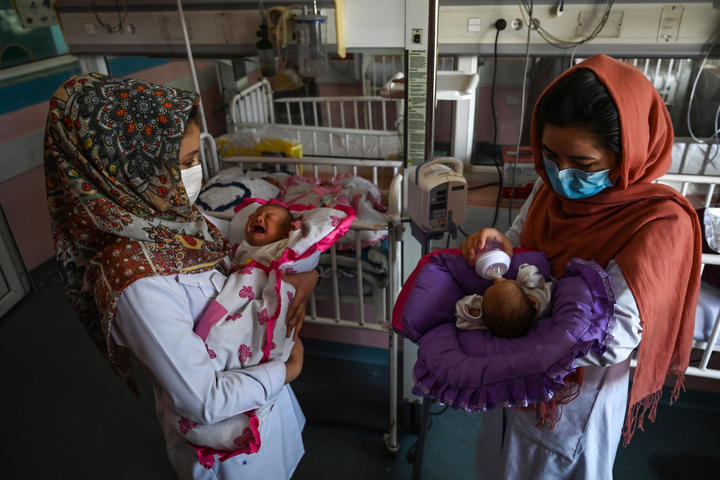 Nurses feed newborn babies whose mothers were killed in the attack on a maternity ward in Kabul on 12 May. Photo: AFP

Warning: Readers may find details in this story upsetting

The attackers had walked straight past a number of other wards, all closer to the entrance of Kabul's Dasht-e-Barchi hospital, and made straight for the maternity unit.

To him, it meant one thing: this was no mistake.

"What I saw in the maternity demonstrates it was a systematic shooting of the mothers," Bonnot, Medicin Sans Frontiere's (MSF) Head of Programmes in Afghanistan, said. "They went through the rooms in the maternity, shooting women in their beds. It was methodical.

"They came to kill the mothers."

Amina was just two hours old when the attack started.

The little girl was the third child for Bibi Nazia and her husband, Rafiullah. Back at home, they already had a girl and a boy.

Nazia had gone to the hospital with her mother, and Amina was born at 08:00.

It should have been a day of celebration for Rafiullah. But at 10:00, the attack began. Explosions were heard by people outside the hospital complex. Those with family and friends inside rushed to the scene - including Rafiullah.

"He ran from side to side. But he couldn't do anything, no one allowed him to go inside," his cousin Hamidullah Hamidi told BBC Pashto. 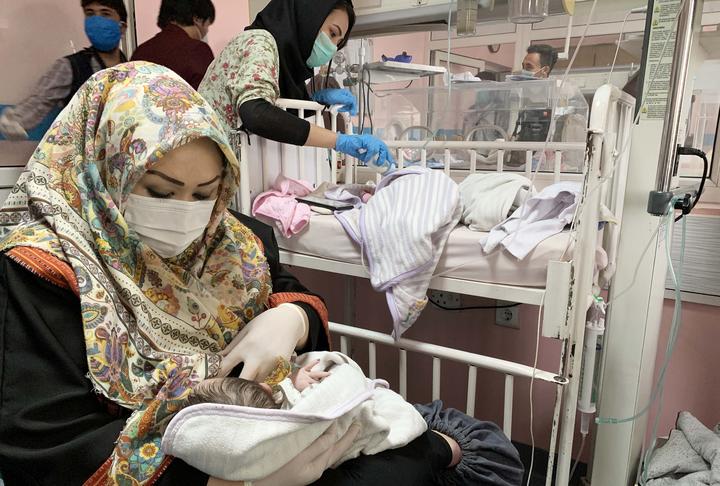 An Afghan mother feeds a newborn baby who survived the attack on MSF hospital, in Kabul. Photo: AFP

Inside the walls of the hospital, three gunmen were moving through the 55-bed maternity unit, which has been run by MSF since 2014.

A total of 26 mothers and mothers-to-be were inside at the time. Ten managed to flee to safe rooms; the other 16 - including Bibi Nazia and Amina - were not so lucky.

Three of the 16 mothers were shot and killed in the delivery room, along with their unborn babies.

Bibi Nazia was among the other eight mothers killed; little Amina was shot in the legs. Five more were wounded. Two young boys were also killed in the carnage, along with a midwife.

One woman, named only as Khadija, told Reuters news agency how one of the gunmen had pointed his weapon at her, before turning it on two other people. 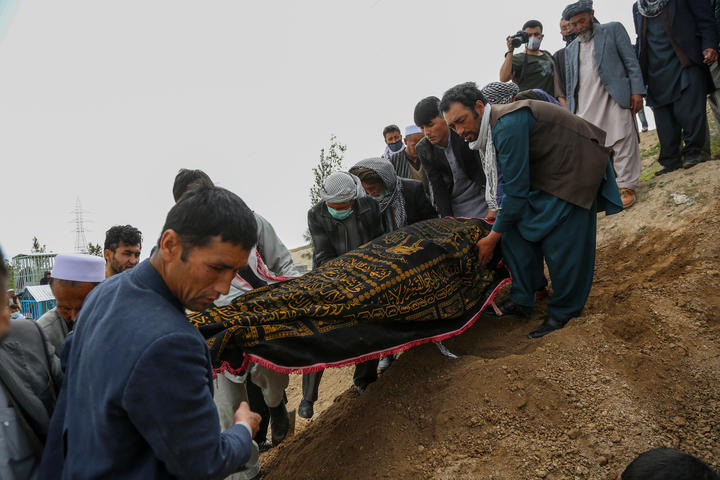 Mourners burying a loved one, following a suicide attack in a maternity hospital in Kabul. Photo: AFP

The gun battle between the militants and Afghan security forces went on for four hours as many of the maternity unit's patients and staff took cover. The gunmen were all killed.

One baby was born at the hospital during those hours. A midwife, speaking on condition of anonymity, revealed to the AFP news agency how the woman sheltering with her in the safe room gave birth while trying not to make a sound.

"We helped her with our bare hands, we had nothing else in the room except some toilet paper and our scarves," the midwife said.

"When the baby was born, we cut the umbilical cord using our hands. We used our headscarves to wrap the baby and the mother."

Frederic Bonnot described how those inside the safe rooms could only listen as explosions and gunfire ricocheted around the building.

By the time they were finished, he said, they found "walls sprayed with bullets, blood on the floors in the rooms, vehicles burnt out and windows shot through".

"It's shocking," said Bonnot. "We know this area has suffered attacks in the past, but no one could believe they would attack a maternity unit.

"This country is sadly used to seeing horrific events," he added. "But what happened Tuesday is beyond words."

Afghan security forces inspect the scene after the attack to the Medicins Sans Frontieres (MSF) clinic in Kabul. Photo: AFP

It is true Afghanistan is used to seeing violence most of the rest of the world cannot imagine. A BBC investigation last year found that, on average, 74 men, women and children were killed every day throughout the month of August.

A fifth of them were civilians, the BBC found.

Within hours of the Dasht-e-Barchi hospital attack, a suicide bomber had killed at least another 32 people attending a policeman's funeral in eastern Nangarhar province. Meanwhile, in northern Balkh province, at least 10 people were killed and many others injured in an air strike by US forces, reports said. Residents and the Taliban claimed the victims were all civilians, but defence officials said all those killed were militants.

The killings come at a time when, technically, the country should be moving towards peace talks.

The US signed a deal with the Taliban militant group in February, hoping to end an 18-year conflict which has ravaged Afghanistan.

As part of the agreement, the Taliban agreed to enter talks with the Afghan government, something they had so far refused to do.

But as violence continues to shatter the country, any hope for a peace deal looks to be on delicate ground: after the hospital attack, President Ashraf Ghani ordered the resumption of offensive operations against the Taliban and other groups.

No group has said it carried out the maternity hospital massacre. The Taliban claimed the Gardez city blast, while the Islamic State (IS) group took responsibility for the funeral attack.

However, US envoy Zalmay Khalilzad has blamed IS for the hospital attack, saying the jihadists want to undermine recent peace efforts and fan a sectarian war. 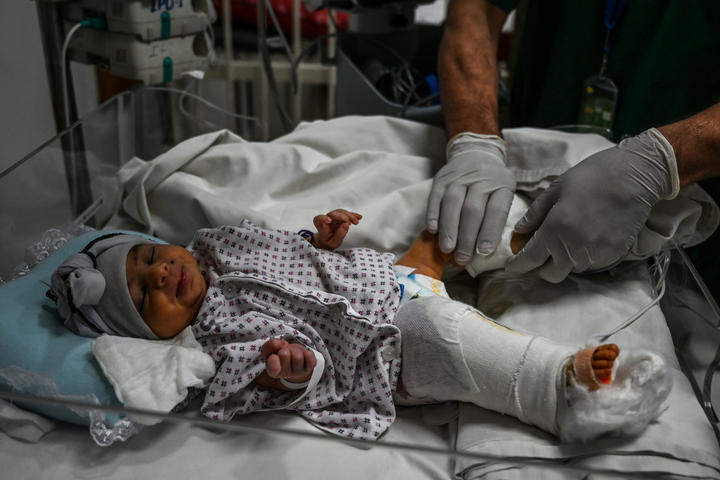 His words are of little use to those caught up in Tuesday's attack - to the grandmother who had to pick up her fatally-injured new-born grandson from the floor, to the murdered midwife who had worked for MSF for six years, or to the survivors who listened helplessly as the assault unfolded.

The babies were moved to the Ataturk hospital in Kabul, the families who had gathered outside the maternity unit following - desperately waiting to see if their child's name was called.

In the confusion, women appeared to offer to adopt the babies, sparking at least one angry confrontation with a grieving grandfather, according to the New York Times. Officials hoped to reunite all the children by Friday.

Little Amina is now recovering in a different hospital. She has already had one round of surgery, with at least two more to go. The doctors hope they can save the leg shattered by a bullet, but they don't know yet.

The family fear for her future if they do have to amputate - life is not likely to be easy for a disabled girl in Afghanistan.

But right now, they are just trying to understand why, as the country supposedly moves towards peace, this happened.

"People have been shouting for 19 or 20 years not to commit atrocities," Hamidullah Hamidi said. "But they have not stopped. These people will not stop committing atrocities."