President Donald Trump has promised the US will reopen "vaccine or no vaccine", as he announced an objective to deliver a coronavirus jab by year end. 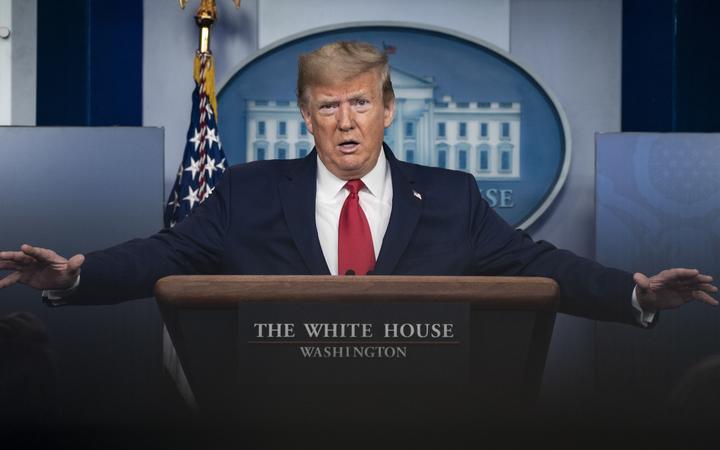 But Trump made clear that even without a vaccine, Americans must begin to return to their lives as normal.

Many experts doubt that a coronavirus jab can be developed within a year.

What is Operation Warp Speed?

Speaking at a White House Rose Garden news conference, Trump said the project would begin with studies on 14 promising vaccine candidates for accelerated research and approval.

"That means big and it means fast," he said of Operation Warp Speed. "A massive scientific, industrial and logistical endeavour unlike anything our country has seen since the Manhattan Project."

Trump named an Army general and a former healthcare executive to lead the operation, a partnership between the government and private sector to find and distribute a vaccine.

Moncef Slaoui, who previously led the vaccines division at pharmaceutical giant GlaxoSmithKline, will lead the mission, while Gen Gustave Perna, who oversees distribution for the US Army, is to serve as chief operating officer.

Speaking after Trump, Slaoui said he was "confident" that a "few hundred million doses of vaccine" will be delivered by the end of 2020.

He acknowledged in an earlier interview with the New York Times that the timeline was ambitious, but said he "would not have committed unless I thought it was achievable".

Many experts say a vaccine is the only thing that will give Americans confidence in fully reopening the economy in the absence of widespread testing.

What else did President Trump say?

"I don't want people to think this is all dependent on a vaccine," he said. "Vaccine or no vaccine, we're back. And we're starting the process."

"In many cases they don't have vaccines and a virus or a flu comes and you fight through it," he said. "Other things have never had a vaccine and they go away."

"I think the schools should be back in the fall," Trump said.

Earlier this week Dr Anthony Fauci, who serves on the coronavirus taskforce and appeared wearing a mask at the Rose Garden conference, testified to the Senate that it would be a "bridge too far" for schools to reopen in the autumn.

As Trump spoke, lorry drivers who have parked around the White House for several weeks blared their horns in protest against low wages, neither for nor against the president.

"Those are friendly truckers. They're on our side," Trump said. "It's almost a celebration in a way."

At one point, the president - who wore no mask - instructed a reporter to remove hers so she could be better heard over the noise of honking as she addressed him.

Is end of 2020 a realistic timeframe?

Dr Fauci and other experts have strongly suggested that a jab will take at least a year to develop.

When the Ebola outbreak struck between 2014-16, it was not until December 2019 that the US Food and Drug Administration approved its first vaccine.

Some health experts have remained sceptical about the rapid timeline for development and distribution proposed by the White House.

"I don't understand how that happens," said Dr Peter Hotez, co-director of the Medicine Coronavirus Vaccine Team at Baylor College, on CNN after Trump's announcement.

"I don't see a path by which any vaccine is licensed for emergency use or otherwise till the third quarter of 2021," he said.

Dr Rick Bright, an ousted US vaccines director who has accused the White House of exerting political pressure around coronavirus treatments, testified to Congress on Thursday that such jabs often take up to a decade to develop.

What other US coronavirus efforts are there?

'Warp Speed' is the latest of several Covid-19 response projects Washington has undertaken.

In March, the White House launched a testing initiative, enlisting major pharmacy retailers like CVS, Walgreens and Rite Aid to set up drive-through testing sites throughout the country. Such partnerships have stalled, however, and the US has faced continued criticism for its lags in testing.

In recent weeks, the White House announced further efforts and has helped ramp up testing to nearly 10 million as of 15 May, according to the Our World in Data database.

On Friday, the US House of Representatives will vote on a coronavirus rescue package worth more than $US3tn that allocates funds to local governments, expanded testing and another round of direct payments to Americans.

But the bill is highly unlikely to pass the Republican-controlled Senate.