Strikes against US forces in Iraq could have been just the beginning of a major operation across the region if the US had responded, a senior Iranian commander is reported as saying. 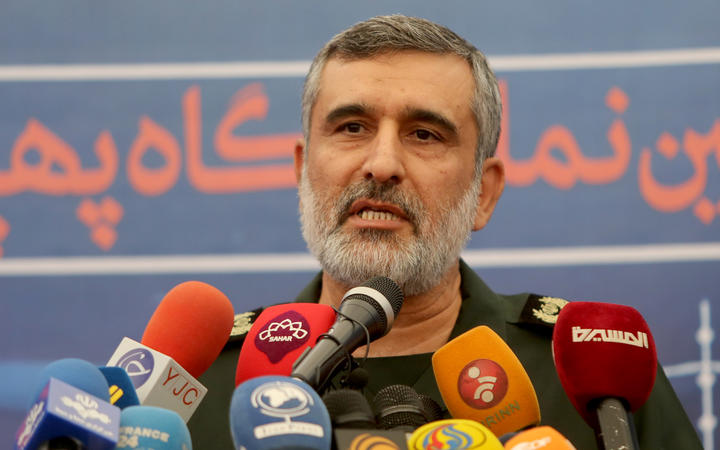 Quoted by state TV, Amir Ali Hajizadeh said the only fitting revenge for Gen Qasem Soleimani's killing by the US was to drive US forces from the region.

His remarks came a day after Iran fired missiles at bases housing US forces.

It was a response to Soleimani's death in a Baghdad drone strike.

US President Donald Trump yesterday announced further sanctions against Iran but said Tehran was "standing down" after the missile strikes. He made no mention of further military action.

In another interview for CBS, Pence said the US was receiving "encouraging intelligence" that Iran was sending messages to its allied militias not to attack US targets.

The US House of Representatives is expected to vote today on a resolution to force Trump to halt further military action against Iran unless Congress gives it the all-clear.

"Members of Congress have serious, urgent concerns about the administration's decision to engage in hostilities against Iran and about its lack of strategy moving forward," Nancy Pelosi, Speaker of the House, said in a statement.

In a news conference covered by Iranian state media, Revolutionary Guards aerospace commander Brig-Gen Hajizadeh said Iran had been prepared to fire hundreds or even thousands of missiles. In the event fewer than 20 were fired.

The intention had not been to kill any US troops, he said, but the operation could have been planned in such a way that as many as 500 died in the first stage, and thousands more if the US had responded.

"We had thought that the clash would continue for three days to one week. We had prepared a few thousand missiles for such circumstances," he said in remarks carried by the Fars news agency.

Brig-Gen Hajizadeh also said that Iran had launched cyber attacks, which had disabled US systems for tracking missiles during the strikes. However, US officials say casualties at the bases were prevented because early warning systems worked effectively.

BBC Persian's Jiyar Gol says the commander's appearance - with the flags of numerous militia groups lined up behind him - was a significant show of regional power, as it means the groups are under Iranian command.

The flags included those of Iraq's Popular Mobilisation Forces - whose leader was killed alongside Soleimani - as well as Lebanese Hezbollah and Palestinian Hamas. The flag of Yemen's Houthi movement, which until now Iran has always denied controlling, was also present.

On Wednesday, Iranian Supreme Leader Ali Khamenei described the attacks on US forces as a "slap in the face" for the US, but said revenge was a "different issue".

As head of the Revolutionary Guards' elite Quds Force, he was an architect of Iranian policy in the Middle East.

Meanwhile, the US said it was "ready to engage without preconditions in serious negotiations" with Iran following the countries' exchange of hostilities.

In a letter to the UN, it justified Soleimani's killing as an act of self-defence.

Tensions between Tehran and Washington began rising in 2018 after President Trump pulled the US out of a landmark nuclear deal between Iran and world powers. The accord was intended to curb Iran's nuclear programme and prevent it from acquiring nuclear weapons.

Mr Trump wanted a new deal that would also curb Iran's ballistic missile programme and its involvement in regional conflicts.

The US also re-imposed sanctions on Iran, sending its economy into freefall again.

Soleimani's assassination on 3 January followed a sharp escalation between the US, Iran and Iran-backed groups in Iraq sparked by the death of a US military contractor in a missile attack on a US base in Iraq - for which the US held Iran responsible.

The US responded with air strikes against the Iran-backed militia Kataib Hezbollah. Militia supporters then attacked the US embassy in Baghdad.

Soleimani was branded as a terrorist by the US government, which says he was responsible for the deaths of hundreds of American troops and was plotting "imminent" attacks. The US has not provided evidence of this.

Iran vowed "severe revenge" for his death. Millions of Iranians turned out for the commander's funeral, with mourners chanting "death to America" and "death to Trump".

A stampede at the funeral in Soleimani's hometown, Kerman, killed 50 people and injured 200 more on Wednesday.

The US strike on Soleimani also killed members of Iran-backed Iraqi militias, who have also vowed revenge.