US President Donald Trump says there were no American casualties in the Iranian strikes on military bases housing US troops in Iraq and that Tehran appeared to be standing down. 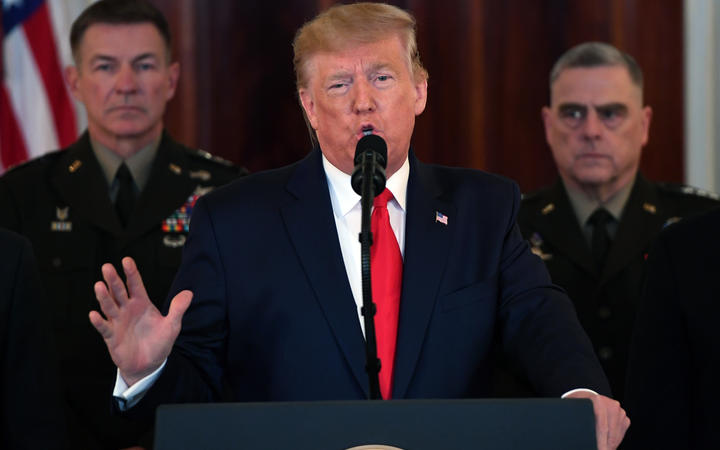 US President Donald Trump speaks about the situation with Iran in the Grand Foyer of the White House. Photo: AFP

The US Department of Defense confirmed that yesterday, Iran launched more than a dozen rockets against the US military facilities of al-Asad base in western Iraq and Erbil in the north.

Introducing his statement at the White House, Trump said: "As long as I'm president of the United States Iran will never be allowed to have a nuclear weapon."

He went on to say US forces are "prepared for anything," but for now, "Iran appears to be standing down".

Trump said no Americans were harmed in yesterday's attack.

World powers must send a clear and unified message to Tehran, he said.

He said Iran has been the "leading supporter of terrorism" and that the country had "threatened the civilised world".

Trump said the US assassination of Qasem Soleimani sent a message to terrorists: "If you value you're own life, you will not threaten the lives of our people."

The US will impose "additional punishing sanctions" on Iran, which has already faced hardship from US sanctions under the Trump administration, he said.

Trump stopped short of making any direct threat of military action against Iran. He urged world powers including Russia and China to abandon the 2015 nuclear accord with Iran and work toward a new agreement.

"We must all work together toward making a deal with Iran that makes the world a safer and more peaceful place," he said.

He added that he would ask Nato to "become much more involved" in the Middle East.

Iraq's foreign ministry has summoned the Iranian ambassador in Baghdad over the missile attacks.

In a statement, the ministry said Iraq rejected "the attacks on camps housing Iraqi and non-Iraqi forces, and we deem them to be a violation of our sovereignty".

"Iraq is an independent state and... its internal security is its priority. We will not allow it to become a battlefield," the statement added.

Republicans were quick to praise the president's leadership and back his call for US allies to do more.

Senator Rand Paul, who was critical of the Soleimani strike, said he was "pleased" at the president's decision to pull back.

I am pleased that President Trump has pulled back and taken the preferred path of no further military action. I believe any further decisions on military action require a full debate and Congressional authority.

I'm heartened that our President stuck with the script, did not humiliate Iran & recognized that Iran is standing down. I'm glad the adults are now being heard! #NoWarWithlran

Across the aisle, Democrat Hank Johnson also offered some praise for the address - albeit with the quip: "I'm glad the adults are now being heard!"

Other senior US Democrats told reporters this morning that no schedule had been set yet for voting on a war powers resolution to limit Trump's military actions regarding Iran.

The officials said the legislation was still being drafted.

Democratic lawmakers want to put a check on the president's powers after he failed to inform Congress ahead of the US drone strike that killed Soleimani.

The BBC spoke to people inside Iran about what they thought of the missile attack. Here are a few of the responses.

"This attack had to be done. War is not good but the USA has been a big bully lately. It had to be stopped. I am sure that Iran won't take further steps," Ramis said.

Another man, Afshin, expressed disappointment. "Iran's attack was pathetic. One of the country's biggest commanders was killed and in revenge, they [launch an] attack with no significant damage or casualties... This was like a failed test for Iran and from now, Israel and the US can do anything."

Nazanin agreed it an act of political theatre. "It was just some action to show the Iranian people that we took revenge. Both Iran and the US know the region's current situation and neither wants to go to war. It was just a political act to start negotiations."

Mohammed said the attack was a warning to the US that its actions would have consequences. "This attack was necessary. The US should know that if they want to harm us it won't be without an answer."