Iran's missile attack on US army bases in Iraq sent gold blasting above $US1600 ($NZ2400) an ounce, boosted the Japanese yen by almost 1 percent and oil by $US3 a barrel. 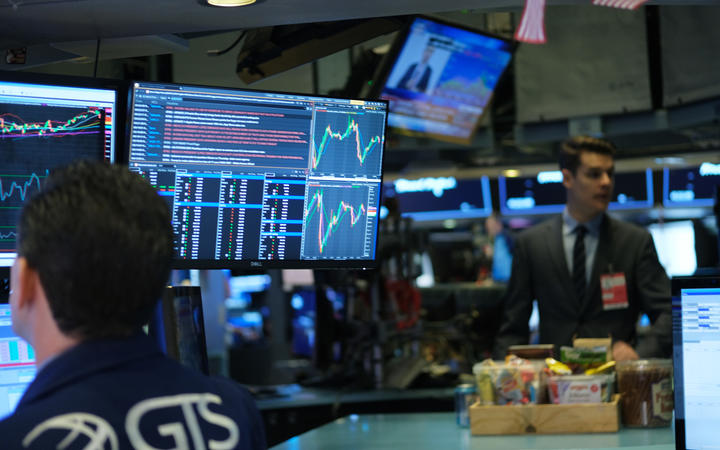 Traders work on the floor of the New York Stock Exchange on 8 January. As tensions with Iran continue to concern global markets, the Dow Jones industrial average opened 7 points up on Wednesday, after futures tumbled more than 400 points late Tuesday. Photo: AFP

But it took just hours for that safe-haven dash to fade and for world equities to resume their climb.

It was the second volte face in under a week following a similar pattern of events after the US killing of top Iranian commander Qassem Soleimani on Friday. And that mirrored a super-fast roundtrip on markets after Iran-backed rebels attacked Saudi oil facilities in September.

Welcome to the brave new world where it appears that little short of full-fledged world war between nuclear-armed powers would be required to have a durable impact on financial markets. And even then, some begin to wonder.

By the European close on Wednesday, Brent crude oil prices had returned back below levels seen before Soleimani's death on Friday and Wall Street's S&P500 equity index rallied to new record highs.

At its most basic level, investors appear to believe that Tehran and Washington will avert a broader conflagration. Regionally-contained military blowups and bursts of conflict have proven in recent years not to have a durable impact on either oil supplies and prices nor global economic activity.

Even September's attacks on Saudi oil installations had no lasting effect on crude prices. And beyond the Gulf, years of North Korean nuclear tests and missile launches have not yet escalated nor affected international investment patterns for any significant length of time.

So traders and investors are betting as much on repeated patterns of behaviour rather than on amateur geopolitical reasoning.

"The market has taken a view based on a decade's worth of experience that this is not going to escalate out of control," said Societe Generale strategist Kit Juckes.

"It's the same with the economy. We've had an economic cycle with mini-cycles since 2008 but no recession, we've had trade wars that haven't really turned into real trade wars but keep getting postponed."

A geopolitical risk index compiled by U.S. Federal Reserve Board researchers Dario Caldara and Matteo Iacoviello rates the Saudi attacks at a relatively high 185 points, but well below the 2003 US invasion of Iraq that scored 545 points.

For decades, the energy price impact has been the main transmission mechanism from major conflicts - particularly in the Gulf - to the wider economy and world markets. The threat of oil supply disruption has been a shadow on the global economy ever since a quadrupling of oil prices during the 1973 OPEC oil embargo and a 30 percent jump in 1990.

But oil spikes these days tend to be briefer. That partly reflects the changing nature of energy usage and geographical sources of supplies. U.S. shale oil producers can now step up to offset price spikes stemming from Gulf supply disruptions, regardless of local politics or OPEC action, while the rise of renewable energy sources amid fears of climate change is happening at a rapid pace.

Donovan also highlighted that back in 1973 energy-producing countries squirrelled away extra oil earnings as savings, causing a net shock to global economic demand as that money drained from oil buyers' pockets.

"In 2020, oil sellers spend that money with abandon and so a higher oil price does not mean a big drop, or potentially any sort of drop, in economic demand."

Learning from the past

Of course, wars and invasions have driven big market shifts in the past, causing mini-panics and safe-asset buying on fears for business confidence, trade and energy prices.

But the experience over recent decades has been that, all things equal, markets tend to recover quickly and portfolio managers with the stomach to see through short-term lurches do well, even without expensive hedging.

A recent Schroders report identified the 1990 Gulf War, the 2001 9/11 attacks on New York and the 2003 Iraq invasion as the most monumental geopolitical risk events of the past 30 years.

In 2003, yields on German government bonds, among the world's most trustworthy assets, tumbled almost 70 basis points between March and June; they fell a similar amount in 1990.

"When you look at the last few decades of history, whenever a prolonged war is the more likely outcome, that's when the rush to government bonds takes place," said Rabbani Wahhab, senior portfolio manager at London and Capital.

However, it also found that in all these instances shares recovered within months, suggesting that "if investors are willing or able to ignore volatility, then investing in the risky portfolio represents a better strategy than a safe portfolio."

All change in markets

The market context itself has also changed over the decades - most prominently by years of near-zero interest rates and central bank money printing that have inflated prices of high-quality bonds, reduced benchmark borrowing costs and cut what's available to investors.

Shares, meanwhile, have been pumped up by buybacks and abundant private funding that have steadily reduced equity supply over the years. With JPMorgan predicting equity supply to decline by a further $200 billion this year, many investors have come to view selloffs as a buying opportunity.

"Central banks have reduced the supply of safe assets and that's rippled out to risky assets. It's a very powerful force."