Aboriginal leaders in Australia's Outback have been expressing relief that their sacred rock, Uluru, will no longer have tourists climbing on it. 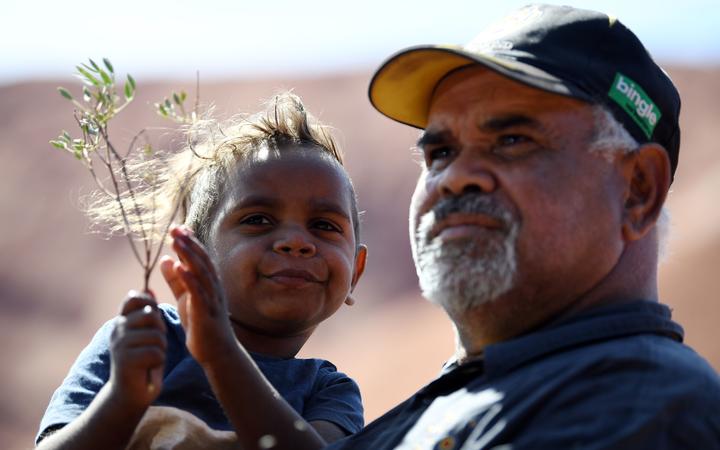 Anangu traditional owners gather in front of Uluru after the permanent climbing ban of Uluru comes into force. Photo: AFP

Anangu traditional owners celebrated at the base of the rock as a new sign was set up notifying visitors the climb was permanently closed.

Friday was the last day for climbing the sacred site formerly known as Ayers Rock, and the dismantling of the tourist trail and its railing is starting this weekend.

Almost 34 years to the day since the Anangu were handed back the title to Uluru, their wishes that people not climb the rock will now be enforced by law.

The Anangu community has been asking visitors not to climb Uluru's steep ochre red flanks since the government returned the land title in 1985.

But until now, they've only been asked not to out of respect - and not forbidden to do so.

Traditional owners wanted the climb closed because of Uluru's cultural significance and concerns about safety and the environment. 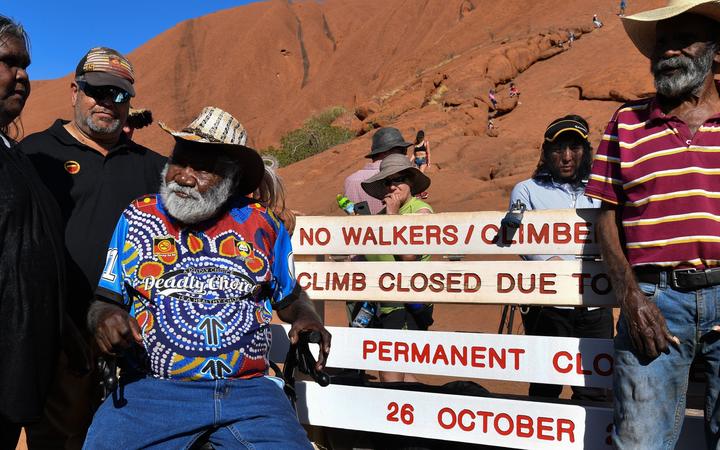 Aboriginal elders stand beside new signage at the base of Uluru, also known as Ayers Rock, as the climbing ban comes into force. Photo: AFP

Local Anangu ranger Tjiangu Thomas said it had been an important day for the community and the region.

"It's rather emotional, having elders who picked up this long journey before I was born, to close the climb, and now they are no longer here but we are carrying on their legacy," he said.

"It's a rather big example of how Anangu are starting to speak up for their country - not only here but for other Indigenous people throughout the nation.

"Hopefully we can use that momentum and keep moving forward to build a brighter future for this generation and the next generation."

Mr Thomas said he believed a lack of education was predominantly the reason people would still want to climb.

"I'd say to those people, come out with an open mind and heart and immerse yourself in the culture," he said.

"Once the focus is away from the climb, there is going to be more focus on the culture and the environment and that is what this park is world heritage-listed for."

But Mr Thomas said he was still disheartened by how many had come to scale the rock in recent weeks, knowing how the traditional owners felt.

"At the end of the day, respect is a choice. Obviously it is disappointing but, compared to the school holidays, today hasn't had very large numbers," he said.

Elder Nelly Patterson said she was relieved the climb had been closed.

"Really good, I'm really happy," she said to cheers from the crowd.

She said seeing people climb Uluru had been hurtful for Anangu.

"I was worrying all the time because a lot of people climb here … go in and make a mess for the toilet and everything, rubbish mess," she said.

"No more climb today … close it. Thank you very much." 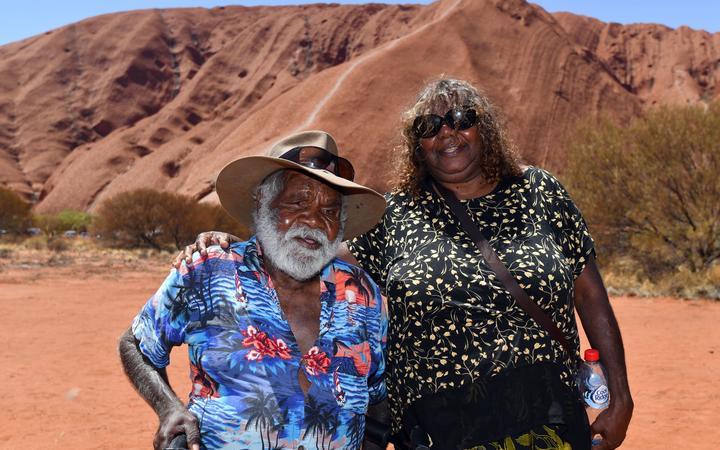 The Anangu people were disappointed by how many people rushed to climb Uluru in the final weeks. Photo: AFP

In a statement, a spokesperson for Parks Australia said anyone who chose to ignore the closure would be pursued and extra patrols of Uluru would be conducted over the weekend.

"Although we expect our visitors to respect the law and the wishes of traditional owners when they visit, significant penalties can be issued," the statement said.

Extra patrollers are on duty at Uluru this weekend as the ban comes into force.

Uluru and Kata Tjuta was handed back to the Anangu traditional owners on 26 October, 1985.

In Uluru's history, at least 37 people have died while climbing and the Uluru-Kata Tjuta National Park board of management said they shared in the grieving process each time a visitor died.

"Tjukurpa [Cultural law and dreaming] requires that Nguraritja [traditional owners] take responsibility for looking after visitors to their country and each time a visitor is seriously or fatally injured at Uluru, Nguraritja share in the grieving process," they said.