Russian scientists tracking migrating eagles ran out of money after some of the birds flew to Iran and Pakistan and their SMS transmitters drew huge data roaming charges. 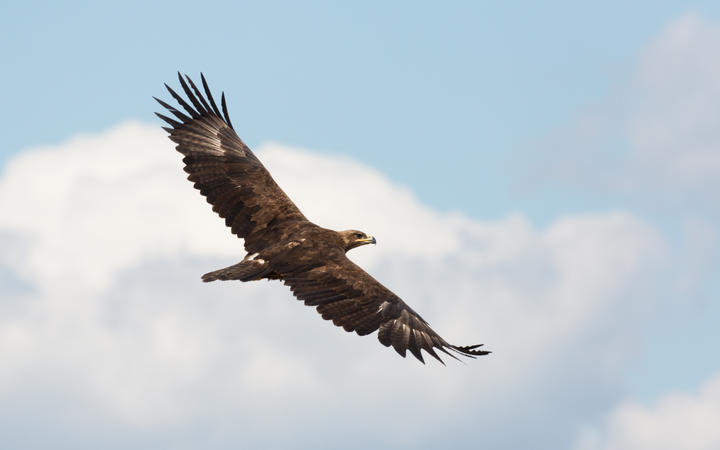 After learning of the team's dilemma, Russian mobile phone operator Megafon offered to cancel the debt and put the project on a special, cheaper tariff.

The team had started crowdfunding on social media to pay off the bills.

The birds left from southern Russia and Kazakhstan.

The journey of one steppe eagle, called Min, was particularly expensive, as it flew to Iran from Kazakhstan.

Min accumulated SMS messages to send during the summer in Kazakhstan, but it was out of range of the mobile network. Unexpectedly the eagle flew straight to Iran, where it sent the huge backlog of messages.

The price per SMS in Kazakhstan was about 15 roubles (47 NZ cents), but each SMS from Iran cost 49 roubles. Min used up the entire tracking budget meant for all the eagles.

The Russian researchers are volunteers at the Wild Animal Rehabilitation Centre in Novosibirsk. Their crowdfunding appeal, which has paid off more than 100,000 roubles ($NZ2471), was called "Top up the eagle's mobile".

The SMS messages deliver the birds' coordinates as they migrate, and the team then use satellite photos to see if the birds have reached safe locations. Power lines are a particular threat for the steppe eagles, which are endangered in Russia and Central Asia.

They are currently tracking 13 eagles. The birds breed in Siberia and Kazakhstan, but fly to South Asia for the winter.

Megafon's offer to bail out the team, reported by RIA Novosti news, means they can continue monitoring the eagles' routes, collecting vital data to help their survival.