At the entrance to a west Auckland chicken factory, just after dawn, two men and two women stand blocking the gate. A truck, crammed full of birds in yellow plastic crates, hisses and creaks as it turns into the driveway and stops. 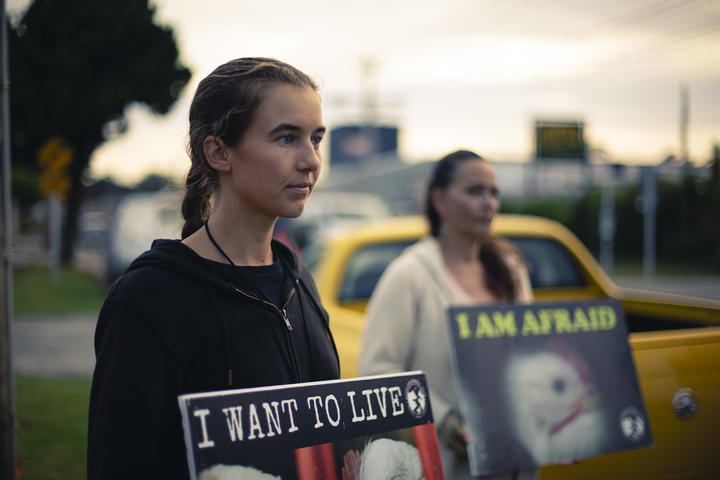 "Two minutes!" shouts Claire McRae, one of the women standing between the truck and the factory, as people swarm around the vehicle, phones and cameras pointed towards the fat, white birds huddled inside.

It's early March, and Auckland Save Movement is holding a "vigil for meat chickens". A group of about 20 has gathered outside the Henderson Tegel factory to "bear witness" to truckloads of birds in their last moments of life. They're part of the Save Moment, a global network of groups that hold these events, usually outside slaughterhouses.

The Auckland group has been active for about 18 months, mainly holding events outside this Henderson factory and an abattoir in Ōtāhuhu. "This isn't a protest, per se, it's a vigil," McCrae, one of the Auckland group's founders, tells me before the first truck pulls into the driveway.

"The primary purpose is to bear witness to these animals and to recognise them as individuals. When people go to the supermarket and see chicken, they tend to think of it as a product and not as an individual. We're here to break that divide."

While the truck idles in the driveway and McRae counts down, members of the group stand at either side, staring through the gaps of the yellow crates, which each contain about 10 birds. A woman slides her finger through to gently stroke a chook's cheek. No one talks - it's silent apart from the sound of cameras clicking, the truck idling and forklifts beeping inside the factory grounds. 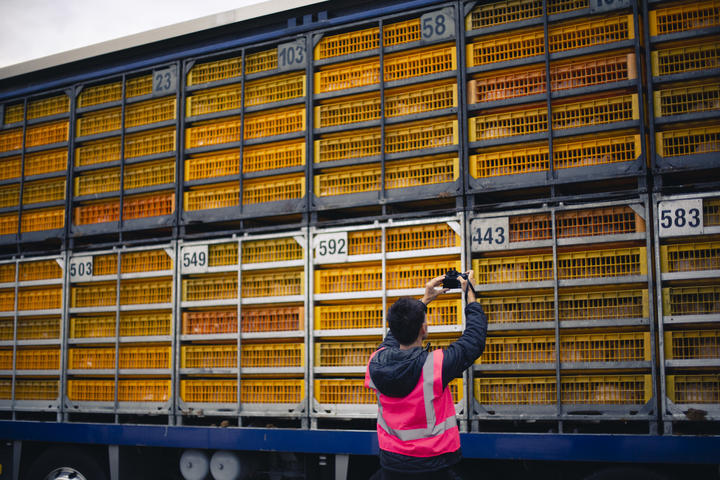 Most of these protesters are vegan, but McRae says non-vegans and non-vegetarians are welcome to come along, (though earlier, one guy told me that as a vegetarian, I still have blood on my hands.) "I mean that's a big reason of why we do it, to let people see, in a non-judgemental environment, the consequences of their choices and make a decision from there," McRae says.

Later on, the other woman who was blocking the truck, Leona Tavui, tells me she and her sister became vegan overnight, in December 2017. "I wasn't eating much meat, I was just eating chicken - sorry chickens." As we chat, she writes 'ANIMAL LIVES MATTER' in chalk on the pavement outside the factory. Across the road, a shop's sandwich board reads '$10 crazy meat deal'.

The Joaquin Phoenix narrated documentary Earthlings, which uses hidden camera footage to take viewers inside factory farming, comes up a lot in conversations with members of this group. "Earthlings. I saw the clip," Tavui says, about the night she went vegan. "That was my worst Christmas ever." Since then, she and her sister have been attending Save Movement vigils, sometimes taking time off work to do so. "I like to come out for the animals as well as [to raise] awareness."

Before the vigil started, the group met a few hundred metres away from the factory, on a quiet cul de sac, where they began with a 15 minute briefing. Placards with slogans like "I want to live", "Please don't make me go there" and "Give a cluck" were handed out, before they formed a circle, arms over shoulders, for two minutes of silence. McRae says vigil-goers can use this time to remember the animals and what they've gone through, that they're here to shed light on what's going on, to focus on having an open mind, or on staying positive in their own mental health.

As we walk to the factory, Joe Zalucki tells me the Earthlings documentary inspired him to go vegan about three years ago. "People have their blinkers on when it comes to this, I did too," he says. "I'd eaten meat all my life. Never really quite understood the level of suffering, the sheer scale of the thing. I was one of those people that thought, 'oh it will be easy for my daughters to go vegan, but not myself, I like my meat'. And I realised it's not 'my' meat. It's an animal that doesn't want to die. " 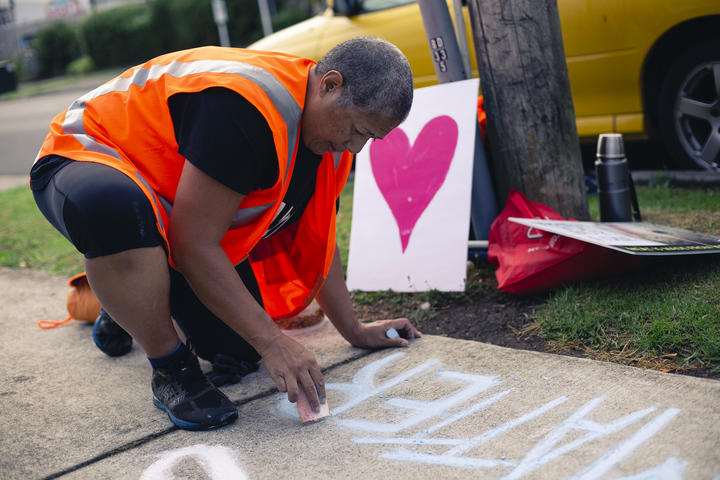 “I like to come out for the animals as well as to raise awareness,” Leona Tavua says. Photo: RNZ / Luke McPake

About an hour into the vigil, the group draws the attention of Tegel staff and four men place road cones and barriers across part of the driveway. A fifth man in a mauve business shirt chats affably with McRae as the truck turns into the driveway and she moves to block it.

When McRae first started organising the vigils she would, "as a courtesy", email slaughterhouses beforehand letting them know the time and the date that they'd be there. Her hope was that the group would be allowed to spend a peaceful two minutes with the animals, with the blessing of companies like Tegel, without the risk of being trespassed. "We hardly ever got any replies and were basically met with security," she says.

It's no different this time. "What I'll remind you guys is that this is private property, so I'm gonna ask you to leave," the man in the mauve business shirt says, as the group surrounds the truck. They don't leave and the police are called, though McRae tells me later that no formal action was taken. At a vigil the month following, they are met by men wearing high visibility vests and at least three police officers who warn them they'll be trespassed if they step onto Tegel property.

A Tegel spokesperson said they didn't allow the protesters to stop the trucks, as it created "health and safety issues" with the "truck sticking out onto the road" (the truck that RNZ saw stopped during the vigil did not stick out onto the road.)

"These are very large vehicles in a confined space with gates and a busy roadway, and the last thing we want or need is someone being injured which is why the police got involved," the statement said. "We absolutely acknowledge the right of New Zealanders to protest and certainly don't want to be heavy-handed but we do have to adhere to strict health and safety guidelines for the protection of both our employees and the public."

After their two minutes with the chickens, everyone steps back and a bemused looking truck driver guides the vehicle into the factory yard. Members of the group look sullen - one man sits down on the kerb in tears. The 'Ross 308' breed of broiler chicken used by Tegel have white feathers and bodies so plump that some appear to struggle to stand. They are killed at about five weeks old. Many of the birds in the truck are covered in faeces.

"They are babies. It is really confronting seeing that sort of thing and seeing the sheer scale of it," McRae says after stepping back to let the truck go by. "It's hard knowing that, it's so surreal, I almost have to put up my own level of cognitive dissonance. I know that right now, they'll be unpacked from those crates, someone's probably going to be yanking them out by their legs, shackling their feet, hanging them upside down, they'll be dragged along a line, they're gonna have their throats slit and they're gonna bleed out. And that's happening literally metres away from us and that's a very hard thing to process."

When they're not bearing witness, the group faces the road, holding up their signs, encouraging motorists to toot. With one arm, Christian Huriwai, another of the Auckland Save Movement co-founders, holds a sign above his head with a picture of a Ross 308, that reads "I am only 40 days old. I am not food, I am a baby." Some drivers toot, some don't. One SUV driver aggressively revs the engine, emitting a plume of black exhaust smoke. In response, Huriwai smiles and pulls a peace sign, exposing the word 'earthling' tattooed on the inside of his left arm.