Kaikōura conservationists are reeling after almost all the banded dotterel chicks in the South Bay colony were killed by cats. 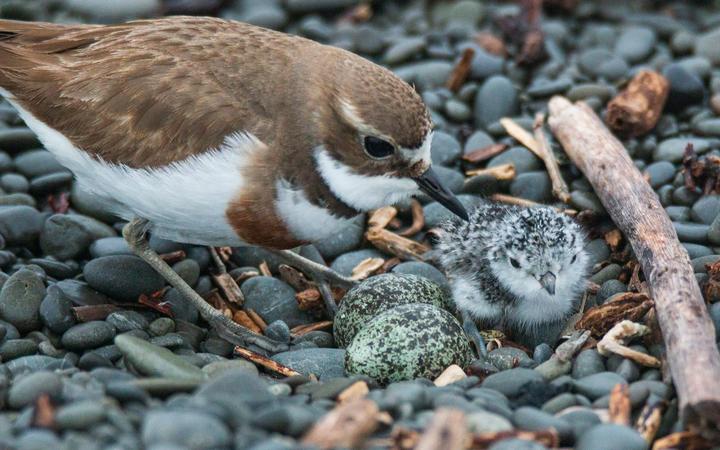 In less than a week, 16 of 18 native shorebird chicks were plucked from their nests and killed, while another two adult dotterels have gone missing, presumed dead.

Banded dotterel are considered nationally vulnerable and were being monitored at South Bay as part of a five-year study.

Aisla Howard, one of the researchers, said there had already been "really severe" findings over previous nesting seasons, indicating that most nests were destroyed by predators.

"But this still caught me unaware. I wasn't prepared... but these results are terrible," she said.

Cats had been seen on monitoring cameras checking the eggs before they hatched, and Ms Howard said the culprits who killed the chicks this week were equally likely to be domestic or feral.

She said the local feral cat population had exploded after the earthquake, while it had proven difficult to get the message across to cat owners about the devastating effects that nightime predation could have.

"I think we just need to have some conversations - is there some way we could do an amnesty, for people who have cats to keep them inside for two particular nights, so we can go out and kill the feral cats? Or could we say, its fine to have your cat out at night but during the dotterel season it's an offence? Or could we offer a cat tracking programme?"

In 2017, Ms Howard said the researchers had invented a cage which kept the dotterel chicks safe from cats but allowed adult dotterels to walk free.

It had proven "amazingly successful" until the following year, when the cats worked out exactly when and how the adult birds were escaping - and killed them.

While Ms Howard said conditions in South Bay were very conducive for dotterel breeding, predation proves an ongoing, widespread problem in all coastal areas and braided rivers that the species chooses to breed.

Cats and other predators are estimated to be three times more of a threat to the dotterel species than humans.

"So we need to be solution focused. We have to deal with this threat to the species... because it's really in trouble," she said.

Last month DOC was asking visitors to the beach or rivers to keep their dogs on a lead, and vehicles away from the high water mark, to avoid squashing dotterel eggs or chicks.

The banded dotterel is about 20cm long and weighs about 60 grams. They're a sandy brown on the back, with a chestnut band on their otherwise white chest - and darker stripe above - in breeding plumage.