It looks like it ought to be the subject of a funny caption competition but this picture taken in China's Qilian Mountains is deadly serious. 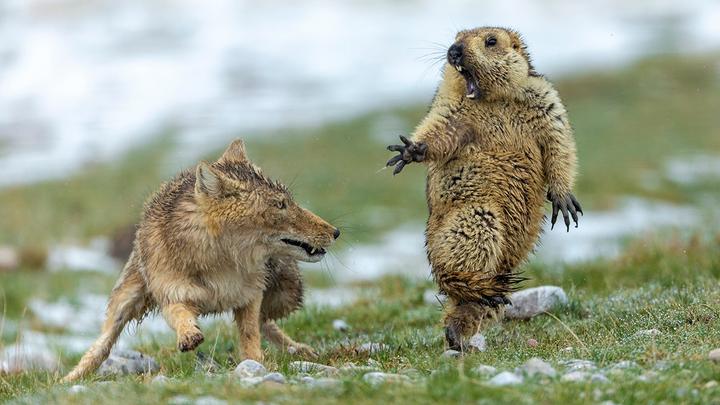 This photo of the moment before a fox snatched a marmot won Yonqing Bao top prize in the Wildlife Photographer of the Year for 2019. Photo: Yongqing Bao/Natural History Museum

The fox has surprised the marmot and a fight is about to begin that will result in the rodent being killed.

Not even the intervention of the marmot's mother can change the outcome.

"That's nature," says Yongqing Bao, whose striking image has earned him the top prize in the 2019 Wildlife Photographer of the Year competition.

The shot also meant Yongqing got to share the award for the best picture in the mammal behaviour category.

Persistence pays when you are a wildlife photographer, and Yongqing had to stake out an alpine meadow on the Qinghai-Tibet Plateau for several hours to be in position to catch the action.

The fox had lain very still, hoping to trap a passing marmot unawares. It worked a treat. In one of the more gruesome frames on Yongqing's camera, the fox has the young rodent's head in its mouth.

Roz Kidman Cox was the chair of judges. "The WPY competition has behaviour entries like no other. The world's top photographers in the field of animal behaviour always enter, and I have to say this image is one of the best I've ever seen," she told BBC News.

This year's junior grand prize winner is 14-year-old New Zealander Cruz Erdmann for his night-time image of a bigfin reef squid in the Lembeh Strait off North Sulawesi, Indonesia. Cruz had entered in the 11-14 years category. 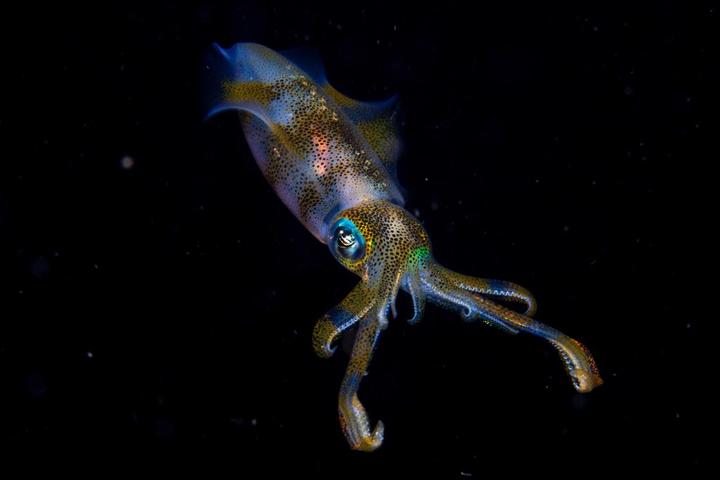 Getting a clear shot of the iridescent cephalopod takes a good deal of technical prowess. "You have to be careful not to stir up the silt when you dive or you'll get a lot of backscatter from the strobe light. I wasn't kicking with my legs so that's why the photo seems very clear," he said.

WPY, as it's often called, is one of the most prestigious competitions of its type in world photography.

Started in 1964, the competition is now organised by London's Natural History Museum.

An exhibition of the best images opens at the South Kensington institution on Friday. Next year's competition starts taking entries from Monday.

Here's some of the other category winners... 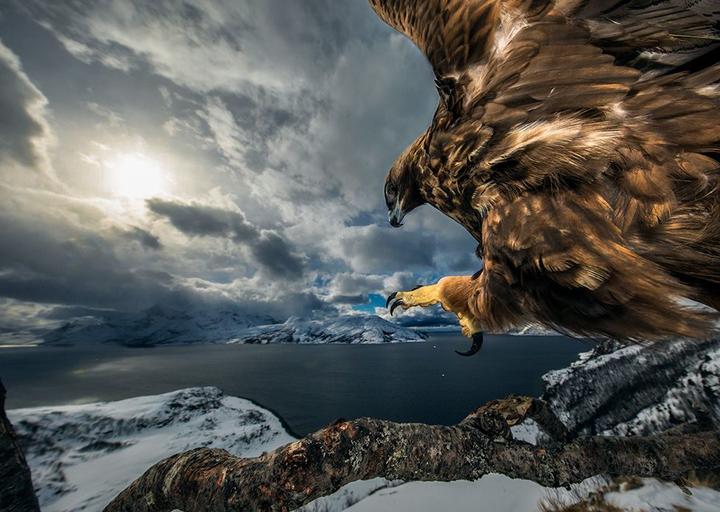 This shot took Audun Rikardsen three years to achieve. He'd carefully placed an old tree branch in a position where the golden eagles would come into land. A camera and flash would trigger as soon as a bird set down.

Mr Rikardsen says "they became so used to the flash going off, it didn't seem to bother them. I think they like having their picture taken." Crows would trigger the camera as well, but that wasn't quite the picture the Norwegian photographer was after. 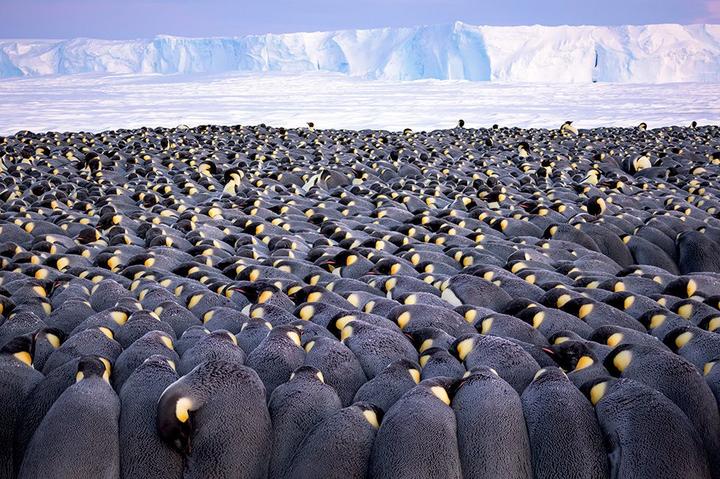 The toughest of the tough. More than 5,000 emperor penguins gather together in their classic huddle formation to beat the wind and late winter cold on the sea-ice in front of the Ekström Ice Shelf in East Antarctica. Stefan Christmann caught this picture of male birds incubating eggs at their feet. The females have gone to sea to forage. 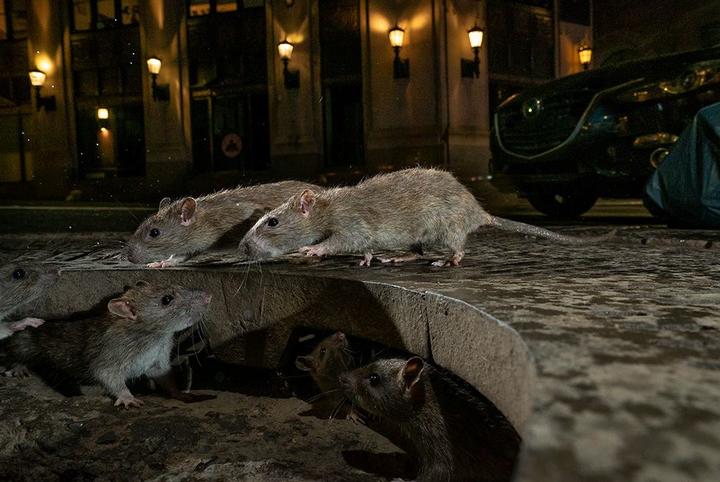 Charlie Hamilton was on an assignment for National Geographic to photograph the rats of the world. This group he found in the Wall Street district of Manhattan, New York.

The rodents were living under a grill that surrounded the base of a tree. At night they'd run over to the rubbish bins outside a hotel to feed. Mr Hamilton James set up his camera and fired the shutter with a remote trigger from a couple of metres away.

"There were probably 30 rats living under the grate. They became so used to me over three days that one of them came and stood on my foot". 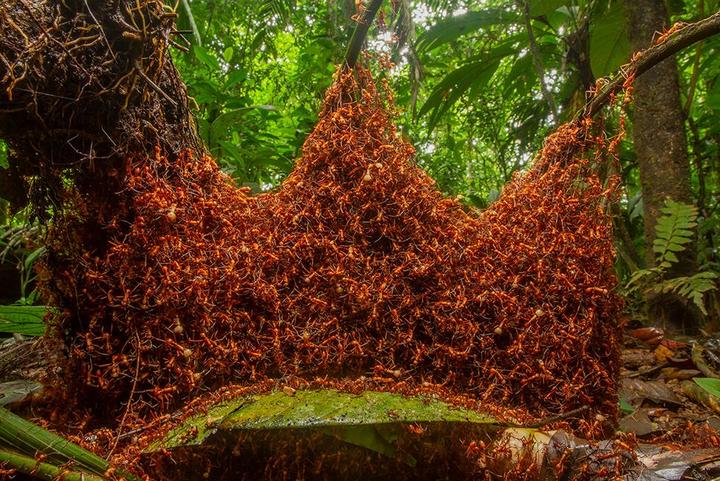 These army ants in Costa Rica don't build a nest in the earth or in an old tree. Instead, they construct it out of their own bodies, hanging from branches in interlocking chains. Inside, are passageways and chambers where they protect their queen and nurture their young.

"Pretty much every day they disassemble this structure; it just melts away and they carry the larvae across the rainforest, setting up a new bivouac maybe 150m away," Photographer Daniel Kronauer said. "It's beautiful. I thought this nest looked like a crown or a cathedral." 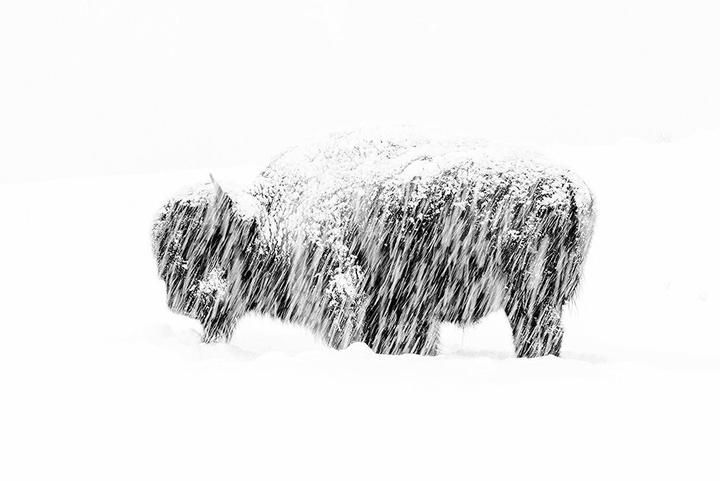 No WPY is complete without a good "whiteout" image. This one of a bison was captured in Yellowstone National Park. The bison wants to get at the buried grasses and sedges and so makes a hole by brushing its face from side to side.

"I'd been in situations like this before where I'd played around with slower shutter speeds," said photographer Max Waugh. "I think that's part of what makes this a good picture - the snow is blurred. I just waited until the bison lifted its head and fired off a few shots." 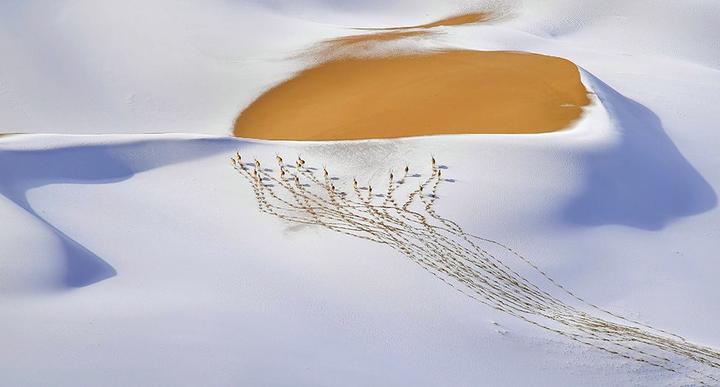 Winner 2019, Animals in Their Environment.

A small herd of male chiru are seen crossing a snow-covered slope in the Kumukuli Desert of China's Altun Shan National Nature Reserve. These  antelope live at altitudes up 5,500 metres where temperatures can fall to -40C.

"They like to get to the patches of bare sand because that's where it is warmest," says photograher Shangzhen Fan. He took this image from a kilometre away. In the same sequence, he saw two bears moving across a ridge.