An Auckland teenager who won an international photography award had only been using his underwater camera for about a year. 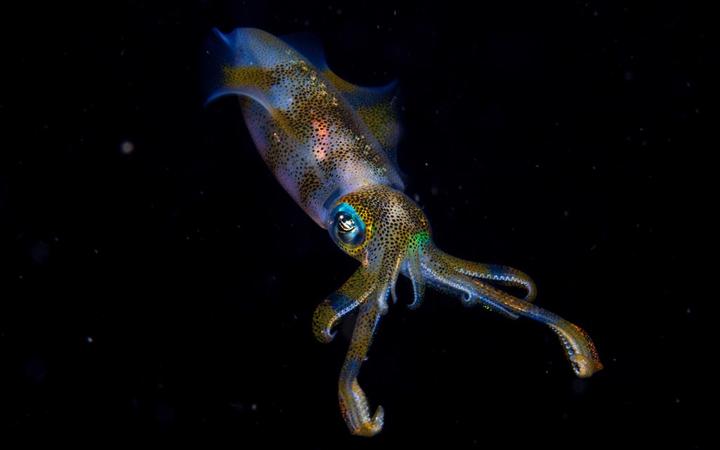 Cruz Erdmann, 14, won Young Wildlife Photographer of the Year, in awards organised by London's Natural History Museum, for a night-time image of a bigfin reef squid.

"My father is a marine biologist and I've been diving for a very long time as well as just being in the ocean but I ... got a camera a little more than a year ago," he told First Up.

"He had a spare camera on one of our dive trips and he decided he might as well teach me, because he uses them in his line of work. That's how I got into it.

"While he was doing whatever he was doing on the reef, I was around taking photos of things I was interested in."

Cruz Erdmann's winning photo of the bigfin reef squid was taken in the Lembeh Strait off North Sulawesi, Indonesia, during a diving trip where his father was guest speaker.

The other divers, who'd paid for the trip, complained he was always in front when the guide called them over to point out something interesting.

"I was a faster swimmer than most of the older guests and I could get there first."

So on one of the last dives his father made sure to stop him racing to the front.

"He pulls me into the dark, away from the rest of the group and that's when I find the squid."

"I didn't take that many [photos] ... I only took about four because I did it manually and the squid was only there maybe about two seconds.

"So I really wanted to see how the photos turned out, because there was a possibility they all could have been blurry."

He said that was the first time he'd seen a live squid.

The teenager has mostly taken photos in Indonesia of smaller fish, invertebrates and coral reefs, and is now moving to more wide angle photography in northern New Zealand waters.

He said the awards ceremony in the Natural History Museum was phenomenal.

"It's in the hall with the huge blue whale skeleton above you, and then they have presenters presenting these incredible photographs of the highest quality, international quality.

"It's just incredibly eye-opening to see the skill of all this diverse range of photographers."