A little blue penguin with a rough past has been crowned New Zealand's penguin of the year. 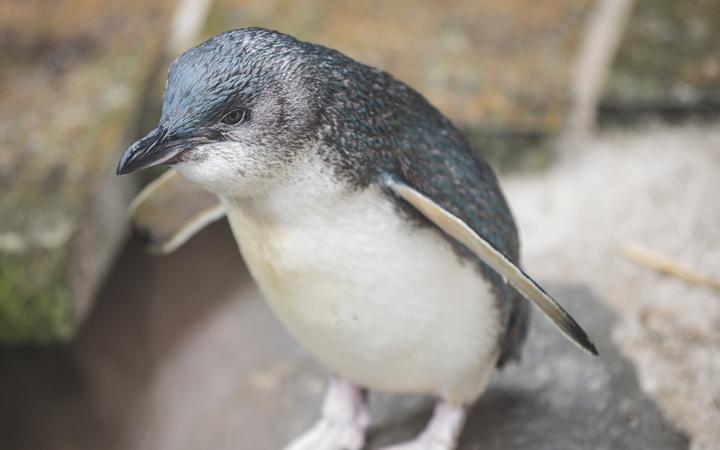 Little blue penguin Draco is this year's Penguin of the Year. Photo: Supplied.

Twelve-year-old Draco, who is the long-time partner of last year's winner, Timmy, beat off stiff competition from Mo and Elmo to take the title in the second year of the National Aquarium's competition.

Global interest had been high since the opening of voting for the title this year, and more than twelve thousand people from around the world cast votes.

Life hasn't always been calm seas for Draco, she arrived at the Napier aquarium's rehabilitation centre after she was hit by a car when she was less than one-year-old. The injury left her with a permanent head injury.

The aquarium says fans really enjoyed finding out who was named the naughty and good penguin for each month, following the antics that earned them the titles.

Draco has been noted for being very friendly to the other penguins, often visiting them in their burrows.

"She received Good Penguin of the Month recently for taking care of Burny's egg, which Burny had left in her burrow, and also sticking up for Timmy when Tux tried to push him off the pier," the aquarium says.

Draco and Timmy's back-to-back wins arguably make them the penguin "power-couple" in residence.

All of the penguins housed at Napier's National Aquarium are Little Penguins, or Blue Penguins, and are the smallest penguin species in the planet, reaching a maximum height of 30 centimetres.

The rehabilitation centre works to nurse animals back to full health to be released to the wild, although injured penguins like Draco are kept at the aquarium if they might struggle in the wild.

Although she is now a model penguin, when Draco landed at the Aquarium it took her some time to adapt to her new home and her keepers - and her wicked temperament earned her the name Draco, after a character from the Harry Potter series.

"When they first arrive, we're not too sure of the sex - we have to do DNA to find out what sex they are," said Rebekah Cuthbert, the National Aquarium's Bird Supervisor.

"Quite often we just give them a name to refer to them by, until we've found their DNA. And it was just around the time that all the Harry Potter movies were quite popular and coming out.

"When she did first arrive here, she was obviously very afraid, and would often try to bite us and was quite aggressive.

"But as she got to realise we were the providers of food and we weren't going to hurt her, she sort of changed her tune a bit, and sort of really mellowed out. Sort of like how Draco ended up at the end of the Harry Potter books I guess."

In the campaign to be crowned Penguin of the Year, Draco was boosted by two high-profile celebrity endorsements: comedian Rhys Darby, and the Kiwi actor Jonno Roberts, who is currently playing her namesake in the Harry Potter and the Cursed Child production on Broadway.

While celebrity endorsements can go either way towards achieving a candidate success, it seems this year it worked out for Draco.

Who was she up against?

In total, 7400 votes were cast in the initial round of voting to select the finalists, out of which Draco, Elmo and Mo were all put forward.

Although Draco ended up running away with the voting in the final, the race for second was tight with just five votes separating the second and third placed Little Penguins.

Both Elmo and Mo have strong personalities, Ms Cuthbert said.

"Elmo's our oldest penguin at 18 years of age - in the wild their average lifespan is ten to12, so it's about the same as us living until we're 120.

"She's been with us about fifteen or sixteen years. She came to us with a very badly damaged flipper after being tangled in fishing lines.

"So unfortunately the damage to the flipper was too bad. So she's only got one flipper now, but she's doing it quite well."

"Mo is our resident bad boy - he is all about food, and he'll often steal food off the keepers or even sometimes the other penguins when it comes to feeding time."

But while the penguins might have no idea about their new celebrity status, the National Aquarium said they hope more people will start to take notice of the work being done.

"We do it, the majority for fun, but also just to bring awareness to people about these birds are here because they're sick and injured.

"Predominantly we work as a rescue rehabilitation centre for the birds. For the most part, we can fix them up and get them back out into the world. And we just provide a home here for birds that are no longer able to survive by themselves."

Ms Cuthbert said it's easy for people to help wild penguins out, "be it as simple as keeping your dog on the lead or picking rubbish up off the beach [these are] things you can do to help our native wildlife and our environment."