Up to 20 homes and structures have been destroyed in New South Wales as a bushfire emergency grips the north of the state. 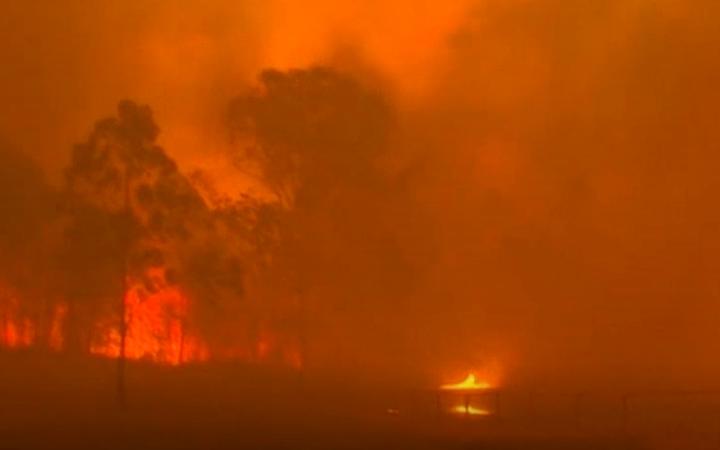 Nearly 1000 firefighters have been battling two separate blazes burning within about 70km of each other in the state's north - at Busbys Flat and Drake.

The New South Wales Rural Fire Service (RFS) confirmed several homes had been affected by the "very dangerous" fire that was "spreading quickly" around Rappville, near Busbys Flat.

"We might have saved the second place but everything else has gone."

On Tuesday evening, about 50 people sheltered at the public school in Rappville, which was saved.

RFS Deputy Commissioner Rob Rogers said several houses in Rappville had been destroyed but authorities did not yet have a count of property losses from all the fires.

"Rappville is the centre of attention because we know a number of homes have been burnt and a number of residents have been significantly affected by that fire and continue to be isolated by downed power lines and obviously no water in the area," he said.

"So we're doing our best to get some help to those people, but it's going to be an extremely long night for a lot of people, along with firefighters."

He said conditions were expected to ease overnight but firefighters would still have to counter significant threats from "hundreds of kilometres of fire line".

Meanwhile, the fire at Drake has already burnt more than 70,000 hectares of land over the past few weeks.

The fire has now crossed the Clarence River and is burning in an easterly direction through the Keybarbin State Forest and Mount Belmore State Forest.

Firefighters endured very difficult conditions on Tuesday, with temperatures of up to 40 degrees Celsius in northern NSW.

Earlier in the day, the RFS issued emergency warnings for fires at Tenterfield and Jackadgery, but they were downgraded shortly before 8pm.

Tenterfield resident Phillip Krauss said he feared there would be worse to come for the town this bushfire season.

"I honestly think if this drought doesn't break, it's going to be a very bad summer," he said.

Peter Reid said the past month had been "horrendous" for people in the town.

"This would be the fifth major fire we've had in the district," Mr Reid said.

Queensland Fire and Emergency Services state co-ordinator James Haig told Morning Report the weather was expected to be better today with a temperature drop to about 30C as against 40C yesterday, however, crews still had a big job ahead of them.

"Yesterday it was very hot here. Today should be a marginally better day but still, the humidity will be low so we're going to be on our game again today."

He said some of the fires were in inaccessible parts of the country.

"It's still extremely dry towards southern Queensland and we expect the fires that are going to continue to give us trouble from time to time."

There was no risk to homes and business he said but there were more than 100 fire trucks, 350 to 400 firefighters at work yesterday.

"It's less threatening [today, but] people need to remain alert."