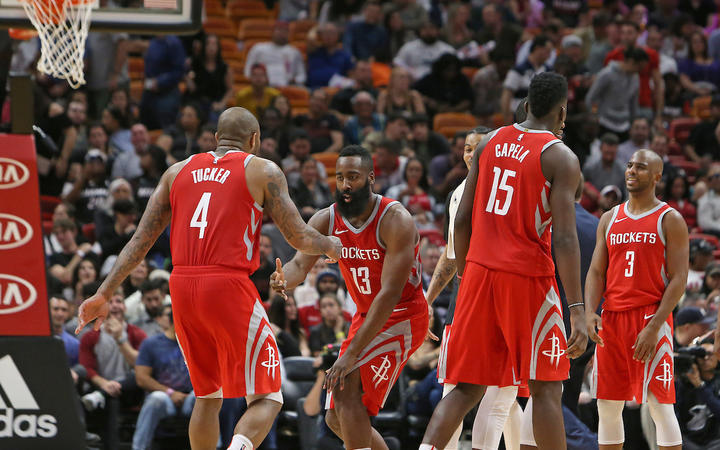 The Houston Rockets' James Harden (13) celebrates with teammates after a play during the fourth quarter against the Miami Heat in February 2018. Photo: Photosport

Rockets general manager Daryl Morey apologised on Monday for any hurt caused by the tweet, which he quickly deleted over the weekend.

But China's government, fans and the team's partners were not mollified, resulting in loss of sponsors and broadcasts in the world's second-largest economy and an important National Basketball Association (NBA) market.

However, NBA Commissioner Adam Silver spoke up for freedom of speech saying it was not up to the NBA to regulate what players, employees and team owners said, nor to adjudicate differences between people around the world.

Any comments that challenged a country's sovereignty and social stability were "not within the scope of freedom of speech", CCTV said, adding it was reviewing its relationship with the NBA.

Months of anti-government protests in Chinese-ruled Hong Kong have angered Beijing, which has accused Western governments of stirring up anti-China sentiment. China rejects outside intervention in Hong Kong as interference.

Chinese smartphone maker Vivo, a key sponsor for the exhibition games in China, announced on Tuesday it was suspending all ties with the NBA, underscoring the strength of the backlash in the country.

A pre-season game between theBrooklyn Nets and the Los Angeles Lakers is set for Thursday in Shanghai, with a rematch scheduled for Saturday in Shenzhen. However, organisers abruptly cancelled a Tuesday media event without explanation.

NBA under fire at home

The NBA had earlier issued a statement saying it regretted Mr Morey's remarks, drawing criticism from US lawmakers.

But Mr Silver, in Japan for an exhibition game, defended Mr Morey's right to express his opinions.

"It is inevitable that people around the world, including from America and China, will have different viewpoints over different issues," Silver said in a statement. "It is not the role of the NBA to adjudicate those differences."

Mr Silver later told a news conference in Japan, where he is attending an exhibition game, that the NBA was not apologising for Mr Morey "expressing his freedom of expression".

"I regret, having communicated directly with many friends in China, that so many people are upset, including millions and millions of our fans," Mr Silver said.

The league has worked for years to cultivate the Chinese market and regularly plays exhibition games there. Its top stars, including Rockets guard James Harden, frequently visit to meet fans and take part in promotions with sponsors.

"As a league we are not willing to compromise those values," Mr Silver said, referring to freedom of expression.

"I'm sympathetic to our interests here and to our partners who are upset. I don't think it's inconsistent on one hand to be sympathetic to them and at the same time stand by our principles."

"I suggest they pay attention to the reaction of the ordinary Chinese people," Mr Geng told a regular briefing.

Exchanges and cooperation would not work if people failed to understand public opinion and China would take "firm and powerful measures to resolutely safeguard national sovereignty and security", he said.

The NBA's regular season, to which CCTV owns the exclusive Chinese broadcast rights, begins this month.

Tech giant Tencent Holdings has exclusive internet streaming rights in China, which media reports have said are worth about $US1.58 billion. It has said it would temporarily stop showing Rockets games.

The decision heaps pressure on the league, which faces criticism on multiple fronts about its handling of the controversy.

Its apology on Sunday had disappointed some who see the league as the most progressive of the US sports organizations. Mr Silver has in the past urged players to speak out on issues of concern at home, including questions of police brutality and gun violence.

Tencent said in July that 490 million Chinese fans watched NBA programming on its platforms last season, up threefold since the 2014-2015 season.