Thousands have joined unplanned protests in Hong Kong after the territory's government announced a face mask ban, which came into effect at midnight. 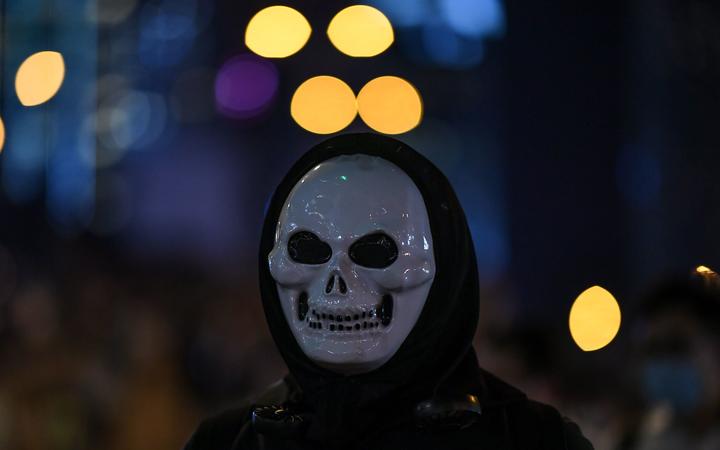 The ban comes after an escalation of violence during protests on 1 October, when an officer shot a demonstrator.

Reports on Friday said a 14-year-old had been shot in the leg.

He is reportedly being treated at Tuen Mun hospital and is in a serious condition.

A police statement published by the South China Morning Post confirmed an officer "fired one shot as his life was under serious threat" after being attacked by a large group of protesters - although it does not say anyone was hit.

Protesters erupted immediately after the ban was announced.

The territory's Mass Transit Railway (MTR) announced a full service suspension of all trains. A spokesman told the BBC this was due to vandalism and attacks on staff. 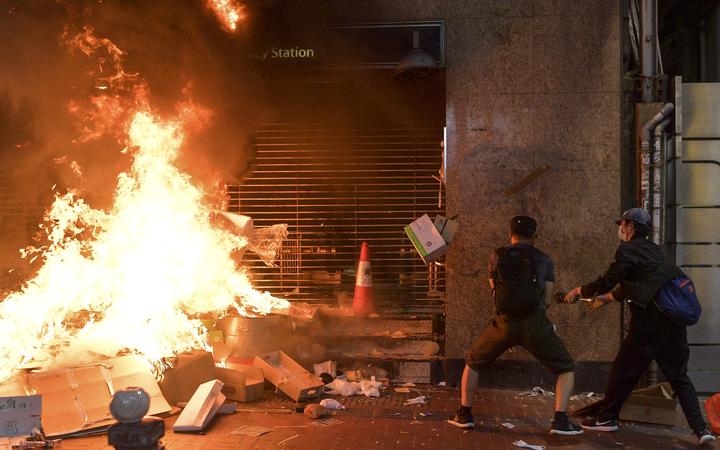 Mask-wearing activists had also earlier called on others to wear masks in defiance of the government, which critics fear is becoming increasingly authoritarian.

Ms Lam said she was forced to implement the colonial-era law because violence at the now-weekly protests was "destroying the city", and she could not allow the situation "to get worse and worse".

What's been the reaction to the ban?

Observers say the regulation will be hard to enforce and hugely controversial: critics have warned the mask ban could be the first in a series of "draconian" measures.

"This is a watershed. This is a Rubicon," pro-democracy lawmaker Claudia Mo told news agency AFP. "And I'm worried this could be just a starter. More draconian bans in the name of law could be lurking around the corner."

The announcement has also prompted reaction from further afield, with Marta Hurtado, the United Nations human rights spokeswoman, noting at a news conference in Geneva that "any restriction must have a basis in law and be proportionate and as least intrusive as possible".

UK Foreign Secretary Dominic Raab, meanwhile, has said "political dialogue is the only way to resolve the situation".

The ban will apply for approved and unapproved public assemblies - rallies and marches - as well as in unlawful assemblies and riots.

The ban covers all kinds of facial covering, including face paint. Protesters have increasingly worn masks for a number of reasons, including to conceal their identities - from employers, parents and, in some cases, police - and to protect themselves from tear gas.

There are exemptions for people wearing masks for health reasons, or if required by their profession.

Ms Lam said "violence had been escalating to alarming levels" leading to a situation of "chaos and panic" in the city.

Legislation not used for more than 50 years

The legislation invoked by Ms Lam, called the Emergency Regulations Ordinance, dates to 1922 and has not been used in more than 50 years.

It enables the chief executive to bypass the normal legislative process, where bills have to go through the city's parliament, the Legislative Council.

The ERO was last used in 1967 to help stop riots in the territory's trading hub.

Ms Lam stressed the new regulation did not mean that Hong Kong was in a state of emergency. But she said the city was "in a state of serious public danger".