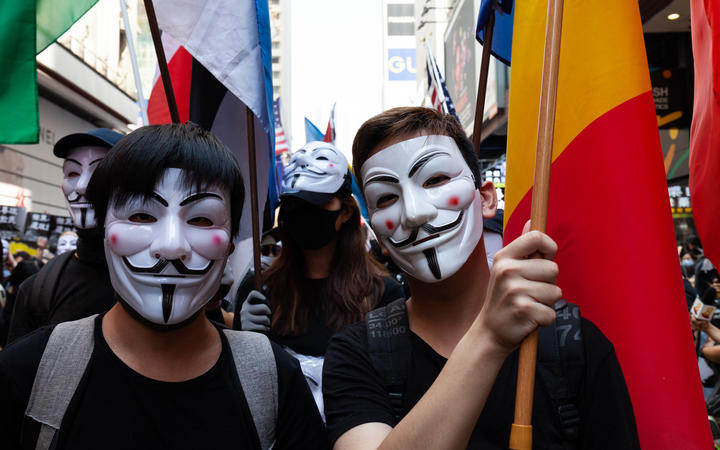 The measure was announced on Friday, after the city saw widespread violence on 1 October, the 70th anniversary of Communist Party rule in China.

Ms Lam said the violence was "destroying the city" and authorities could not "just leave the situation to get worse and worse."

The ban is to come into effect on Saturday.

The legislation invoked by Ms Law, called the Emergency Regulations Ordinance, dates to 1922 has not been used since there were riots in Hong Kong in 1967.

Critics feared this could undermine the city's judicial independence and endanger dissidents.

The laws will grant Ms Lam the authority to "make any regulations whatsoever which he [or she] may consider desirable in the public interest" in case of "emergency or public danger".

Last used in 1967 to help stop violent riots in the territory's trading hub, the laws could also give the government greater authority to make arrests, censor publications and search premises.

In recent weeks, the unrest has taken a more violent turn. An Indonesian journalist has been left permanently blinded in her right eye by a rubber bullet said to have been fired by police on Sunday. On Tuesday, an 18-year-old protester was wounded when a police officer fired a live bullet into his chest.

Face masks are often worn by protesters to help prevent them from being identified and arrested by authorities.

In the recent Hong Kong protests, police have used water cannon to spray blue dye on demonstrators to make it easier to identify them later.

Why has the unrest turned violent?

Opponents of the proposed extradition law thought it would put Hong Kongers at risk of unfair trials and, in July, Carrie Lam said the law "was dead".

Despite this, protesters feared the bill could be revived, so demonstrations continued, calling for it to be withdrawn completely. The bill was finally withdrawn in September.

But clashes between police and protesters had already created their own momentum, and authorities continue to try to crack down on the unrest.

The protests have been spared by wider discontent too. Recent years have seen growing opposition to the perceived encroachment of Beijing on Hong Kong's politics and threats to local identity.

Until 1997, Hong Kong was a British territory. Since then, it has been part of China - but with its own system of law and government, known as One Country, Two Systems.

Hong Kong has its own judiciary and a separate legal system. Rights including freedom of assembly and freedom of speech are protected.

But those freedoms - the Basic Law - expire in 2047. It is not clear what Hong Kong's status will be then.