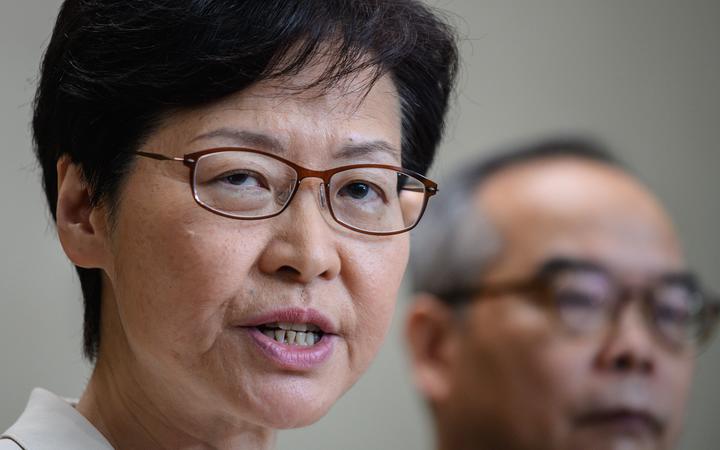 The withdrawal of the bill is part of the measures she hoped would help the city "move forward" from months of unrest in which millions of people have protested on the streets.

In a press conference today, Lam was repeatedly questioned on why it took her so long to withdraw the bill that would have allowed extraditions to mainland China despite increasingly violent protests and police response, but she skirted the questions.

"It is not exactly correct to describe this as a change of mind," she said.

She added that full withdrawal of the bill was a decision made by her government with Beijing's backing.

"Throughout the whole process, the Central People's Government took the position that they understood why we have to do it. They respect my view, and they support me all the way," said Lam, dressed in a cream suit and looking less tense than a televised appearance the day before.

She withdrew the bill, which has plunged the Chinese territory into its worst political crisis in decades, on Wednesday. Hong Kong's Hang Seng Index surged more than 4 percent to a one-month high ahead of the announcement. On Thursday, the market was up 0.4 percent by midday.

Lam also announced other measures including opening a platform for dialogue with society to try to address other deep-rooted economic, social and political problems like housing and mobility for young people, which she said were contributing to the current impasse.

"We must find ways to address the discontent in society and look for solutions," she said.

The withdrawal of the bill was one of the pro-democracy protesters' five demands, although many demonstrators and lawmakers said the move was too little, too late.

The four other demands are: retraction of the word "riot" to describe rallies, release of all demonstrators, an independent inquiry into perceived police brutality, and the right for Hong Kong people to choose their own leaders.

Demonstrators were still calling for all demands to be met, with many placing emphasis on the independent inquiry. Lam said on Thursday that the independent police complaints council was credible enough to address the probe.

"We have all suffered from a humanitarian disaster caused by the government and police force," said Wong, one of around 100 medical students protesting at Hong Kong University.

Further protests are planned including on Saturday another "stress test" at the airport, which was targeted by protesters on Sunday leading to clashes with police on approach roads and in the nearby new town of Tung Chung.

The official China Daily said the withdrawal of the bill was an olive branch that left demonstrators with no excuse to continue the violence.

The announcement came after Reuters reports on Friday and Monday revealed that Beijing had thwarted Lam's earlier proposals to withdraw the bill and that she had said privately that she would resign if she could, according to an audio recording obtained by Reuters.

Skirmishes broke out in some districts, including the working class Po Lam, late on Wednesday after Lam's announcement which came after a weekend of some of the most violent protests the city has seen in the past three months.

Police said a suspected petrol bomb was hurled at a luxury property in Kowloon district in the early hours of Thursday (local time) and the suspects fled on a motorbike. Local newspaper Apple Daily said the house belonged to Jimmy Lai, the newspaper's owner, who was in the property at the time. Pro-democracy publishing tycoon Lai is an outspoken critic of Beijing.

The bill was seen as the latest example of what many residents see as ever-tighter control by Beijing, despite the promise of autonomy.

The former British colony was handed back to China in 1997 under a "one country, two systems" administration which gave the city of more than 7 million people more freedoms than mainland cities, such as an independent judiciary - prompting the anger over the extradition bill.

The protests are the biggest popular challenge to Chinese President Xi Jinping's rule since he took power in 2012. China denies meddling in Hong Kong's affairs and accuses Western countries of fuelling the unrest.

Images of some of the fiercest clashes have been beamed live on television screens across the world, sending jitters across the international business community and leading to a large drop in tourism.

The Hong Kong government took out a full-page advert in the Australian Financial Review saying it was "determined to achieve a peaceful, rational and reasonable resolution" and is resolutely committed to "one country, two systems".

It ends the advert by saying: "We will no doubt bounce back. We always do."

More than 1100 people have been arrested since the violence escalated in June and Hong Kong is facing its first recession in a decade.

China has strongly denounced the violence and warned it could use force to restore order.