An activist involved in anti-government protests in Hong Kong has been shot in the chest by police during a clash. 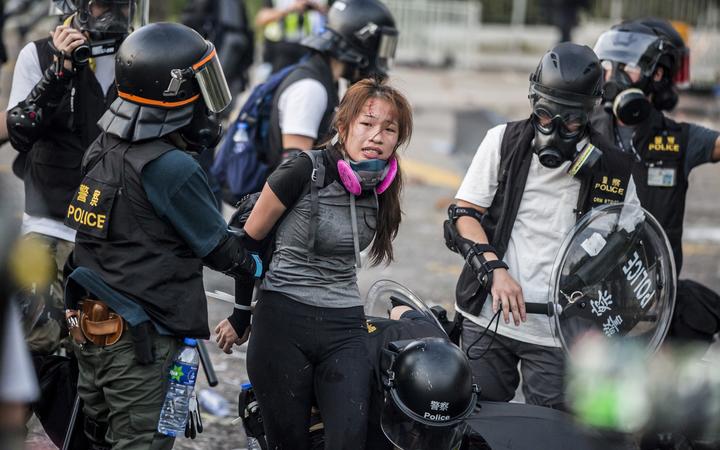 Police detain demonstrators in the Sha Tin district of Hong Kong as violent demonstrations take place in the streets of the city on the National Day holiday to mark the 70th anniversary of communist China's founding. Photo: AFP

The incident came as thousands of people demonstrated in defiance of a protest ban for the 70th anniversary of Communist rule in China.

Though people have been shot by rubber bullets in previous protests, this is the first injury from a live round.

In the Chinese capital Beijing, 15,000 soldiers paraded with advanced military hardware to mark the anniversary.

Earlier, the Chinese flag was raised at a special ceremony in the territory. Security was tight and the 12,000 invited guests watched the event on a live video feed from inside a conference centre.

On what is being described by protesters as a "day of grief", people took to the streets in central Hong Kong and at least six other districts, blocking roads in some areas.

At least 51 people were injured during the clashes, as police fired tear gas and protesters threw petrol bombs. Two people are in a critical condition and two others are seriously injured, the Hospital Authority said.

According to local media, at least 96 people were arrested.

What happened to the man who was shot?

The man, who is aged 18, has been undergoing surgery and his condition is not known. Police say he was hit "near his left shoulder".

A video shows the injured man lying on the ground, saying: "Send me to hospital. My chest is hurting, I need to go to hospital."

Video of the shooting shows a police officer opening fire with a revolver at a man swinging what appears to be a metal pole, as a group of protesters confront riot police.

Police say their officers were attacked and the policeman who opened fire did so as he "felt his life was under serious threat".

"He fired a round at the assailant to save his own life and his colleagues' lives," Senior Supt Yolanda Yu Hoi-kwan was quoted as saying by the South China Morning Post.

"The police force really did not want to see anyone being injured, so we feel very sad about this," she added.

Police tried to disperse the protesters - some of whom were armed with petrol bombs, projectiles or poles - with tear gas, rubber bullets and water cannon, the latter spraying blue dye to make it easier to identify them later.

At least 15 metro stations and numerous shopping centres in the city were closed, and some 6,000 officers have been deployed in the territory. 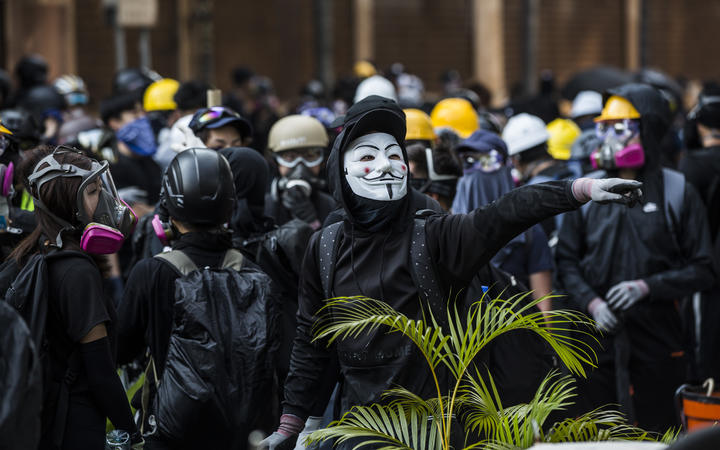 At least 51 people were injured during the clashes. Photo: AFP

What is the background to this?

Hong Kong has been a part of China since 1997 but has its own system of law and government - known as One Country Two Systems.

In recent years, there has been increasing opposition to what has been seen as the growing influence of Beijing on Hong Kong's society and politics.

Hong Kong always sees anti-Beijing protests on 1 October, and this year they were expected to be larger than ever, because of the months of unrest triggered by proposed changes to the extradition law.

The changes would have made it possible for China to extradite people to the mainland from Hong Kong, something opponents felt put Hong Kongers at risk of persecution in unfair trials.

For nearly four months, protesters have taken to the streets - at times reported to be in the millions.

The proposed changes to the extradition law have officially been scrapped but that has failed to quell the unrest, which has now evolved into an existential battle over Hong Kong's future.

How was the anniversary celebrated in mainland China?

Dressed in a Mao suit, he watched the parade which featured some military hardware on show for the first time.

The highly choreographed event presented an image of national unity and gave no hint at the difficulties faced by China's Communist leaders during the last seven decades, or their current problems.