One person has been killed and 10 others wounded in a violent attack at a vocational college in the Finnish city of Kuopio, police say. 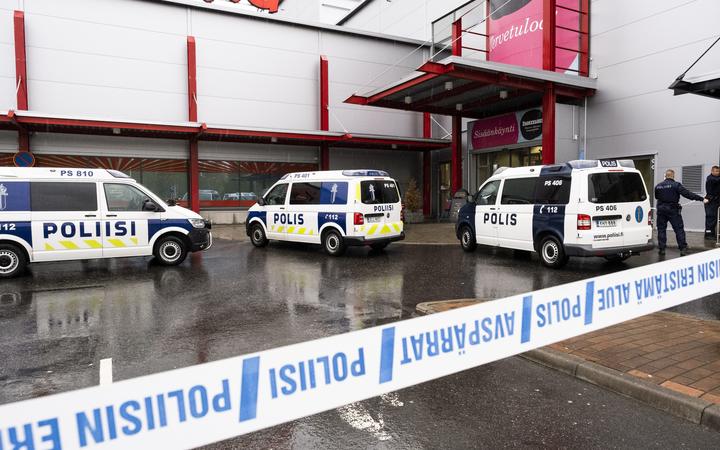 Police cars stand on the blocked grounds of the Hermanni shopping centre in Kuopio, Finland, after an attack occurred on the premises of the Savo Vocational College. Photo: AFP / Lehtikuva

Police said the suspect was carrying a "bladed weapon" and a gun.

They said officers used a firearm when detaining the suspect after arriving at the school, which is in a shopping centre south of the centre of Kuopio.

Another witness told local radio that armed police had confronted the suspect, who walked into a class at about midday on Tuesday, and two shots had been fired.

The suspect, who police said was a Finnish man, was among those wounded in the attack. A police officer was also reportedly injured. Two people were said to be in a serious condition.

"One dead body has been found at the college premises of Kuopio Herman," police said. The wounded were taken to Kuopio University Hospital.

The college has about 600 students and 40 staff, but officials said it was unclear how many were at the scene at the time of the attack.

One woman told Finnish media how she had helped a female teacher who suffered a deep wound to her hand when she was attacked by the student.

"While I was helping the teacher, I started hearing other shouts for help ... students were running," she told Finnish television channel MTV.

The suspect had walked in on a class and pulled a sword out of his bag and attacked the teacher, the Iltahlehti news website reported. As she tried to flee, students threw chairs at the attacker in an attempt to escape and some were wounded.

"He hit a girl in the neck with a sword and stabbed her in the stomach," an unnamed witness was quoted as saying.

It is not clear if the suspect is a student at the college and police have yet to confirm a motive for the attack.

Prime Minister Antti Rinne said the violence at the college was "shocking and completely unacceptable", while Education Minister Li Andersson said every young person had a right to study in safety, without fear of violence.

Finland is considered a relatively safe country, with a total of 73 homicides in 2017, but it does have a large gun-owning population. In 2008, a 22-year-old gunman shot dead 10 people at a vocational school in the town of Kauhajoki before fatally shooting himself.