Queensland remains in the midst of the worst bushfire threat in recorded history and an omen of things to come, the state's fire service has warned. 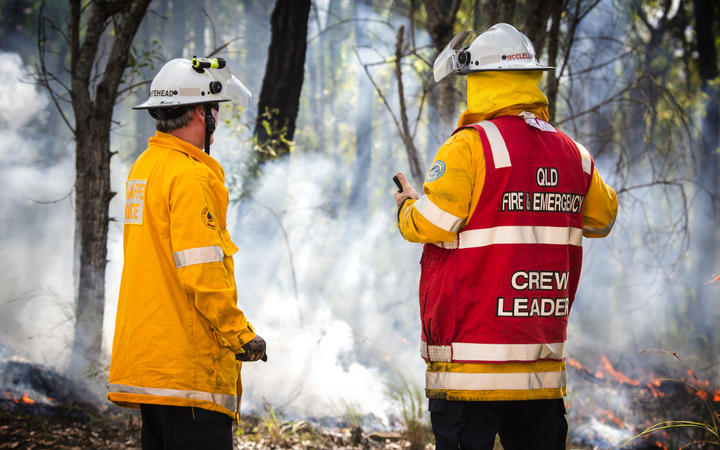 Sixty-five fires are raging across the state in what has been the worst known start to the bushfire season.

Acting Premier Jackie Trad said almost 50 structures had been damaged by fire across the state, with 12 of those completely destroyed.

"These are obviously challenging conditions but we have resources deployed right throughout the state on the ground and in the air," she said.

"We have closed 11 schools today out of an abundance of caution - these schools have not been damaged - it is about ensuring access routes remain clear and kids are out of the heavily polluted atmosphere.

"Around 97 properties have been assessed for damages, about 47 have been recorded as being damaged or destroyed as a result of the fires."

She said there weren't any evacuation centres open, but recovery centres are being set up to help people get any assistance they need, including hardship grants and damage assessment.

"We do expect that throughout the day there will be a return to homes by people so they can assess the damage," she said.

"There will be communication from the insurance council and individual insurers, so people can start making contact with insurance agencies."

The weather bureau has warned residents near bushfires "still have to be extremely cautious" as winds are forecast to reach 80 kilometres per hour on Monday.

Weather Services Manager Richard Wardle said there would be locally severe fire danger ratings across the eastern Darling Downs, with conditions across the state not expected to ease until mid-week.

"The dry air has penetrated deep into the tropical north, and is expected to cause very high fire dangers along the north-east coast, including Townsville and Cairns, the Atherton Tablelands and towards Cape York," he said.

"It's not until Wednesday, when we see the true easing of the winds, when we could see those fire danger ratings ease back to high instead of very high."

'We have no idea what we are left with'

In nearby Binna Burra, a continuing blaze completely destroyed the heritage-listed Binna Burra Lodge, dealing a major blow to the region's economy.

"The only thing we know for sure that has survived is the business car," Steven Noakes, chairman of Binna Burra Lodge, said.

"That represents nine decades of Binna Burra as of a physical item as of today, that one car."

Binna Burra is a mid-sized tourism business with 70 staff and a turnover of $5-6 million, making it the biggest single employer in the community in Beechmont.

Local resident Sharon (surname withheld) is waiting to be allowed back home, at a road block at Lower Beechmont.

"We don't know really what is going on. That's why I am here," she said.

"I want to find out whether we have something to go back to. You hear things through other people and websites. We have seen footage but we have no idea what we are left with."

Sharon's sister was escorted by police and firefighters into the area yesterday and said at the time both her and Sharon's house were still standing.

"She said it could still be under threat with the wind direction changing but at that point it was still standing," Sharon said.

"Two houses down was gone, two houses up was gone. It's the luck of the draw really isn't it - where the fire is going to land."

Another resident Irene (surname withheld) said she was staying with a friend at Lower Beechmont, while her husband stayed at home to look after the house.

"He's got all the hoses out around the house ready to go if anything happens, but nothing had happened so far," she said.

"I've tried for several days to go back home but the police have been at Sommerville Road and said I can't go past."

In Applethorpe, some families have been allowed to return home while others are yet to survey the devastation.

"There are some areas of course that people are only allowed in via escort," she said.

"There's certainly been a lot of assets destroyed in the form of infrastructure, sheds, tanks - that sort of thing."

She said one agricultural business had lost everything in the blaze.

Scenic Rim Mayor Greg Christensen said more than 4,200 hectares had been impacted by the fires.

At the height of the crisis, about 300 people were staying in evacuation centres in Stanthorpe and Warwick.

The Housing Department has moved into the community and is organising accommodation for residents who have lost their homes.

Queensland Fire and Emergency Services Assistant Commissioner Kevin Walsh said residents who had evacuated should not return home unless they have permission from authorities.

"We're starting a process with some residents that are potentially able to return to their premises to look after urgent matters, particularly animal welfare," he said.

"We are seeing how many of those people we can get back to their houses under escort for a brief time.

"If you have not made arrangements with us to return to your house, you still cannot return - it's not safe."

Other dangers, including falling gum trees, were also a risk for people returning home, while severe drought conditions on the Southern Downs were also proving challenging for firefighters.

Mayor Dobie said water may need to be trucked into the town earlier than expected.

Meanwhile, Scenic Rim Mayor Greg Christensen, said no additional homes were lost in his region overnight thanks to the hard work of firefighters in extremely tough conditions.

"The firies were working in smoky areas - smoke you couldn't see your hand through - and they were standing in that, managing a trickling fire front with that acrid smoke in their face for hours last night … they are very brave guys," he said.

"I know there are some significant losses in some of the corridors … we are working with some properties to get fodder in today because there's nothing left for the cattle that have survived in those areas."

In Far North Queensland, about 70 firefighters battled blazes at Dimbulah and Irvinebank on the Atherton Tablelands.

Mango and citrus farmer Bryan Schincariol said that fire burnt through about 60 of his fruit trees.

"There's other people out there probably worse off than us that have lost a hell of a lot more than we have," he said.