Queensland emergency services have spent another night battling fires across the state and are bracing for another tough day ahead. 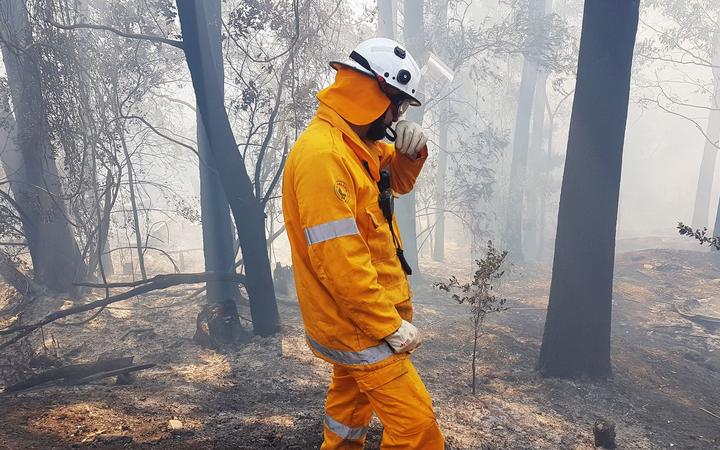 A firefighter in Queensland where bushfires have destroyed 17 homes in the last 24 hours. Photo: Supplied /Queensland Fire and Emergency

Forty-two bushfires continue to burn throughout Queensland and the towns of Applethorpe and Stanthorpe remain the main concern for authorities, with windy conditions forecast by the Bureau of Meteorology.

A bitterly cold night in Stanthorpe has done little to quell the fires encroaching on the townships.

The fire is travelling in a north-north-easterly direction towards Applethorpe. Residents have been advised to leave immediately.

The large fire at Binna Burra, on the Gold Coast Hinterland, had been downgraded to advice level yesterday but was revised to a watch and act early today.

In Canungra, near the Sarabah and Beechmont fires, wind gusts of up to 75km/ph were recorded in the early hours of Saturday night.

Ms Palaszczuk said there were 17 homes across the state that had been destroyed by fire in the past 24 hours.

Minister for Fire and Emergency Services, Craig Crawford, said residents in southern and south-east Queensland should remain vigilant with the dry and windy conditions expected until Tuesday.

"The next three to four days will certainly still be testing for us. We do know that conditions will not be as bad as yesterday and overnight but we still do have those significant fires," Mr Crawford said.

"We still have plenty of resources up our sleeves here in Queensland."

Wind gusts have also picked up dust which has travelled across the state, heavily reducing visibility.

"There's widespread dust that's been kicked up by this wind change as its traversed across the state and we've seen visibility reduced quiet substantially," BoM state manager Bruce Gunn said.

Queensland's Deputy Police Commissioner warned the fires would likely travel to the north of the state.

"The conditions will not abate for a few more days. Not only will it be in the south-east but it's actually going towards the northern part of the state as well," she said.

Yesterday Prime Minister Scott Morrison said the nation was standing alongside those affected by "what is still a tense situation".

"And to all those that are out there volunteering today and supporting those in desperate need and fighting those fires, as always we say thank you to you," he said.

Mr Morrison said people who had been impacted by the fires would get all the support they expect from the Commonwealth and state governments.

Fears of a firebug

In Far North Queensland, firefighters are urging residents to report suspicious behaviour to Crimestoppers, with fears some fires are being lit deliberately.

The Atherton Tablelands have been hit hard by fires this week, with one blaze engulfing a home at Biboohra, north of Mareeba.

Area commander Inspector Shane Jarvis said crews were concerned about the way some fires were starting.

"We are asking the community to help us out, you are our eyes and ears and we need your help," Inspector Jarvis said.

Winds set to ease in NSW

As the winds are set to ease today, firefighters continue to battle multiple fires across the state in what has been an unprecedented start to the New South Wales bushfire season. 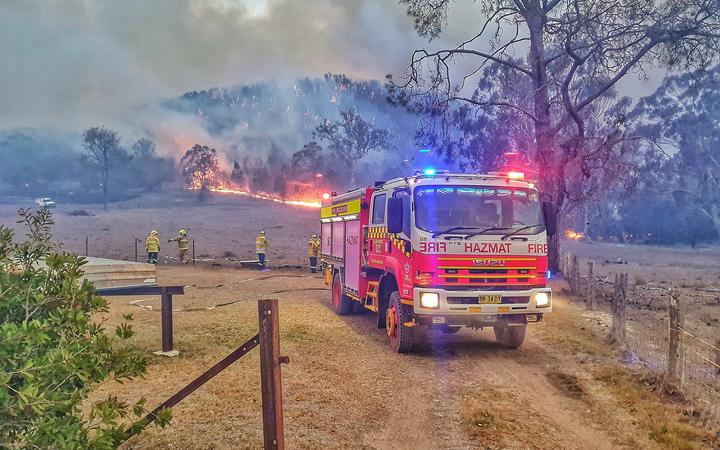 The strong winds, which had topped 100 kilometres per hour across the state, are forecast to lose power as the low pressure system east of Bass Strait that had caused the conditions moves away.

More than 730 firefighters have been working over the weekend to tackle 62 fires across the state, five of which remain out of control.

NSW RFS Commissioner Shane Fitzsimmons said that the early fires were an indication of a dangerous bushfire season ahead.

"Never before have we recorded extreme fire danger conditions this early in the month of September," he said.

"Normally, you would expect those sorts of conditions as you come closer into the summer months.

"It is a sobering reminder of what is ahead, with the outlook indicating the next three or four months is dominated by above-average temperatures, below average rainfall and unfortunately there is no meaningful signal anywhere for drought-breaking, relieving rain."

The Insurance Council of Australia has declared the bushfires a catastrophe and will give priority to claims from affected policyholders.