Police are trying to negotiate with a man hanging from a harness off the underside of Brisbane's Story Bridge as climate protests take place in Brisbane, Melbourne and Sydney. 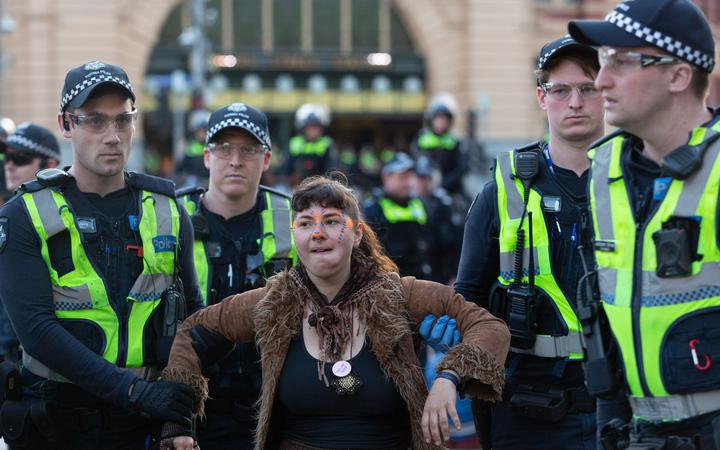 A protester is arrested during street action by Extinction Rebellion in Melbourne. Photo: AFP

Officers were called to the bridge just after 5.50am to find climate protester Paul Jukes, 49, swinging from a makeshift harness about 10 metres below.

He is lying in a suspended hammock, surrounded by Extinction Rebellion and 'climate emergency' flags.

The left lane inbound on the Story Bridge was closed but has since been reopened as officers attempt to negotiate with Mr Jukes.

Queensland Ambulance Service medical director Stephen Rashford photographed the scene from a distance, describing it as "a waste of valuable emergency services".

"Honestly, enjoying our rights in Australia to safely protest does not give you the right to act like a moron and tie up valuable emergency services," he said in a tweet.

"Not sure affecting good people going about their business does anything but demonstrate immaturity."

Extinction Rebellion spokeswoman Laura Harland confirmed a member of the group was responsible but said the act was not part of the larger, planned protests organised in Brisbane this week.

"The group is an autonomous, decentralised movement," she said.

"Most actions, everyone in the movement isn't going to know about. [This protest has been] organised by a smaller group [within Extinction Rebellion]."

Bridge activist prepared to stay for a week

The Airlie Beach engineer hanging about 50 metres above the river said he had 30 years' experience as a rock climber and felt safe.

"I got heaps of pears, chocolate, I made up a huge Thai red curry last night, a lot of rice and water, so after a week my diet will get a bit plain, but I can stay here as long as it takes.

"Until then I've told police if they try and rescue me they'll be putting me in potentially very serious danger because of the way I've rigged the lines.

"I am safe and more than capable of rescuing myself when the Premier and Lord Mayor respond to my demands."

Mr Jukes is demanding they "declare a climate emergency".

He said he suffered a personal loss due to climate change when his late wife's memorial was destroyed in the recent Binna Burra bushfires.

"She passed away when my daughters were very young. She asked her ashes be scattered in Lamington National Park and a memorial was set up and it just burnt," he said.

"My daughters have lost that connection to their mother."

Mr Jukes said he planned to hand himself into authorities following the protest.

Three protesters have been arrested in Sydney.

Dressed as bees, more than 100 protesters from the Extinction Rebellion group staged a "die-in" at Hyde Park, claiming the insects are under threat due to the human impact on the environment.

The trio arrested by police had been lying on the roadway at the intersection of Market and Elizabeth streets in the CBD.

It follows the arrest of 38 people yesterday in Sydney. People lay in the street and chained themselves to objects as part of protests around Central Station and Broadway.

Those arrested are aged between 19 and 75 and have been charged with failing to comply with police direction. 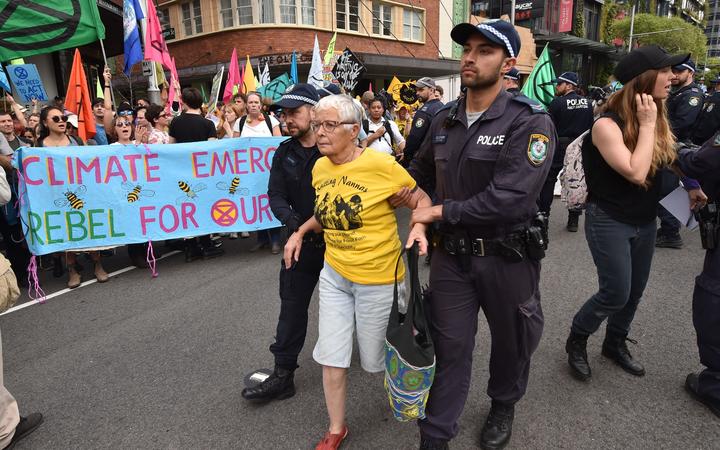 A woman is arrested during the street protest in Sydney. Photo: AFP

In Melbourne, some core members of Extinction Rebellion camped out in Carlton Gardens in the city's north overnight before heading back into the CBD.

Spokeswoman Miriam Robinson said the plan was to "swarm" city centre intersections throughout the day.

The protesters split into smaller groups, followed by small teams of police.

"Our intention is not to hold people up for hours and hours and shut the whole city down, we're not here to spoil everyone's day, that's not our reason for being," Ms Robinson said.

"What we're trying to do is draw attention to the climate emergency. And unfortunately we're driven to do things like this, because this is what gets the attention, this is what causes government to respond.

"Our emissions are still going up, the climate crisis gets worse and worse, temperatures are rising, sea levels are rising." 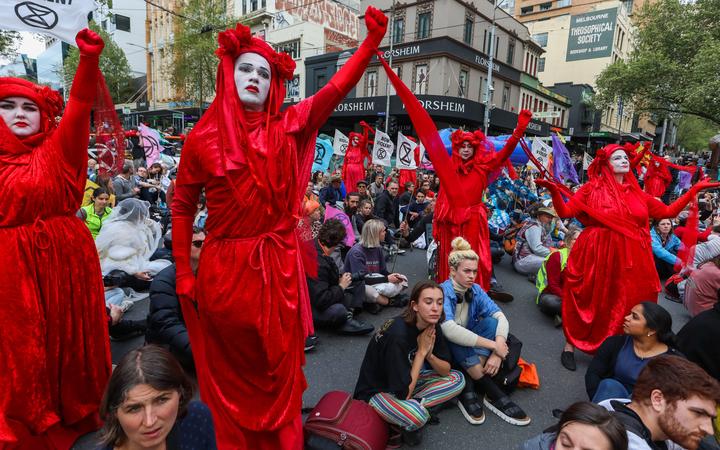 Ten people were arrested at a demonstration at the intersection of the busy Flinders and Swanston Streets for failing to obey orders to move on.

Two of those arrested were charged with intentionally obstructing an emergency worker.

Disruptions across Melbourne, Sydney and Brisbane by Extinction Rebellion are expected to continue for the rest of the week.