Police have made dozens of arrests after removing climate protesters staging a sit-down protest on the corner of Wellington's Lambton Quay and Bowen Street. 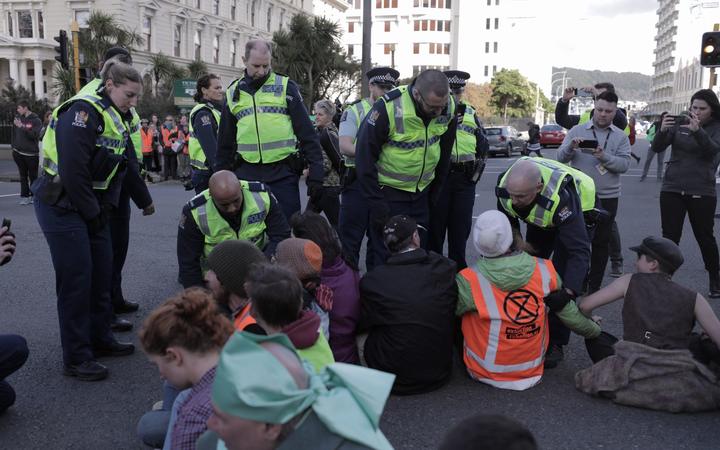 An estimated 40 protesters blocking the intersection were picked up and removed into police vans by 6 o'clock. Photo: RNZ / Dom Thomas

They stopped buses going to and from the downtown bus terminal, as well as other traffic. Protesters are moved on by police in Wellington.

Members of Extinction Rebellion were sitting in a circle, while singing, chanting and refusing to move.

Our reporter at the scene said about 30 police officers had been present.

Initially three protesters were arrested, but others had subsequently been taken away and placed in police vans by 6pm.

An estimated 40 protesters had been blocking the intersection. They had stopped buses going to and from the downtown bus terminal, as well as other traffic. 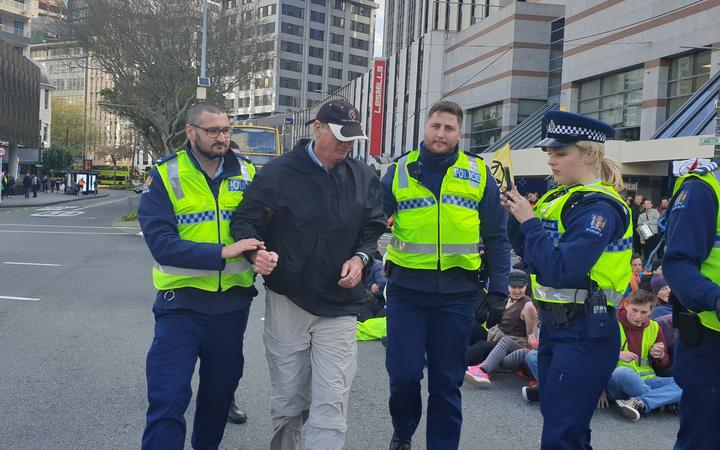 A protester is led away by police. Photo: RNZ / Yvette McCullough

Earlier, the ANZ branch on Willis Street was shut down, workers left and police were at the scene during mass action by the group.

The protesters tried to do the same further up the street at the oil and natural gas company, OMV, but staff had already left the building.

Six protesters attached themselves to a pink car at one end of Stout St, having removed the wheels so it is immobilised. Another person has attached themself to a three-metre pink boat at the other end of the street. 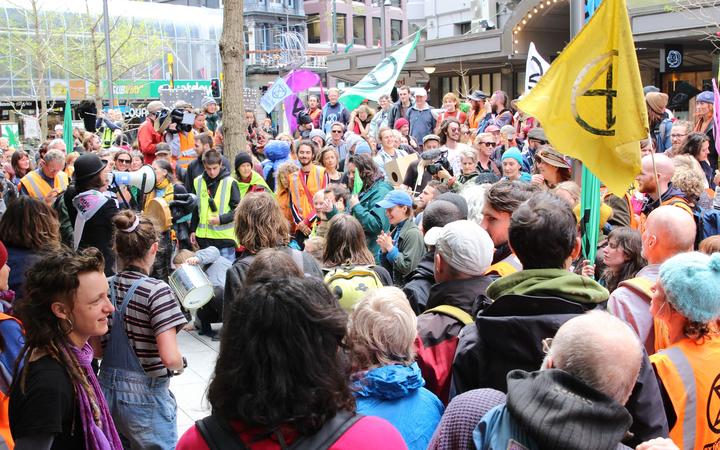 Six people also glued themselves onto the building housing the Ministry of Business, Innovation and Employment.

It is believed the protesters will move on from Stout Street, to cause more disruption, though they have not said exactly where.

Wellington City Council said the protest had caused bus diversions. Bus routes are now being returned to normal on Lambton Quay, but may be subject to disruptions as they occur, it said on Twitter.

UPDATE #3 (9.20am): Bus routes being returned to normal on Lambton Quay. @metlinkwgtn currently operating normal bus routes subject to disruptions as they occur. Buses already on diversion route, will stay on that.

Extinction Rebellion members said they would risk arrest to pressure the government to take swift action on climate change.

"Going on the streets, and disrupting the process, enough that people are willing to engage with how bad the problem is, is the kaupapa of Extinction Rebellion and it's been very successful so far," spokesperson Sea Rotmann said.

Blocking people from their jobs is ineffective, PM says

The prime minister doesn't think disruptive protests take the issue of climate change any further on.

Jacinda Ardern said New Zealand is a place where people are free to protest.

"We're a country that encourages people to do that, but of course, drawing the line at it being legal and it being safe and non-violent.

"But blocking people from being able to go and do their day-to-day job doesn't necessarily take us any closer to the climate action they're calling for", Ms Ardern said. 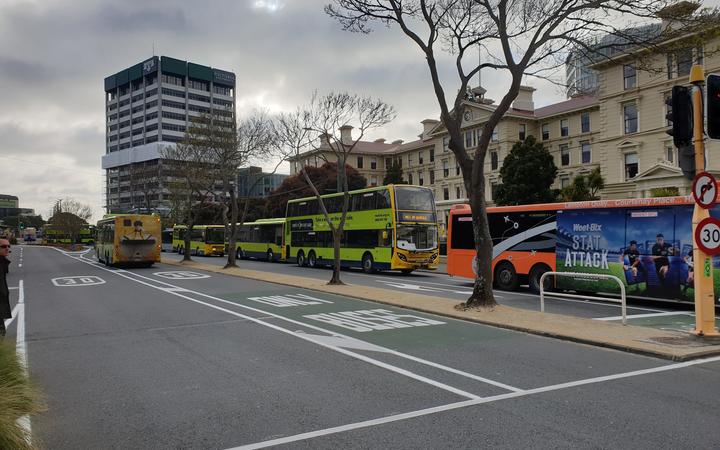 Protester Jen Olsen told Morning Report that the protest is set to continue "all day today".

She said they were targetting the MBIE office to demonstrate against the petroluem exploration permits that have been granted.

"And at a time of climate crisis, we think that is just a gross irresponsbility." 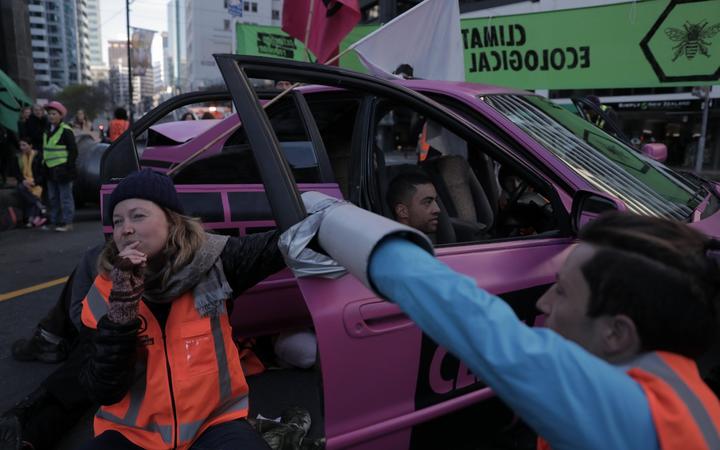 Extinction Rebellion protesters have blocked off Stout St in central Wellington, in a bid to cause disruptions outside MBIE's office. Photo: RNZ / Dom Thomas

Staff working for the MBIE have been told to work from home.

A spokesperson said all access points into its Stout Street building were closed.

MBIE security is monitoring the situation and will work with police if required.

Extinction Rebellion is prepared to cause disruptions to make their point but today's demonstration was aimed more at the government rather than the public, Ms Olsen said. 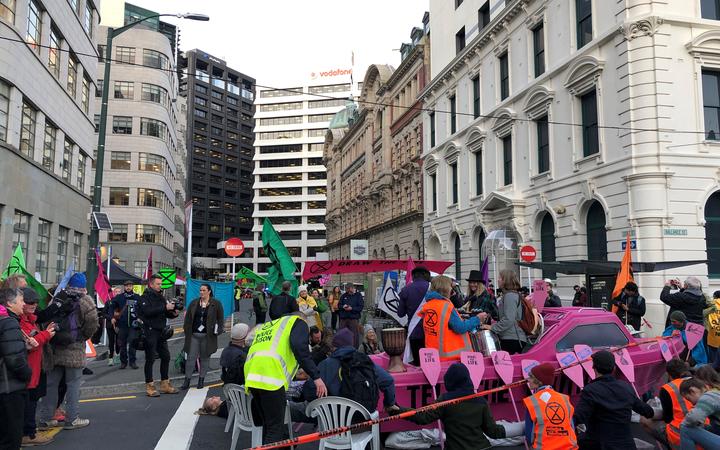 The global movement plans to shut down 60 cities worldwide today, starting with Wellington.

While planning was meticulous for the event today, Ms Olsen said, they also recognise they probably won't gather the same big number of protesters as those in bigger cities around the world.

"But we're the first country in the world [today] that is taking this action. We wanted to make it something that would be successful." 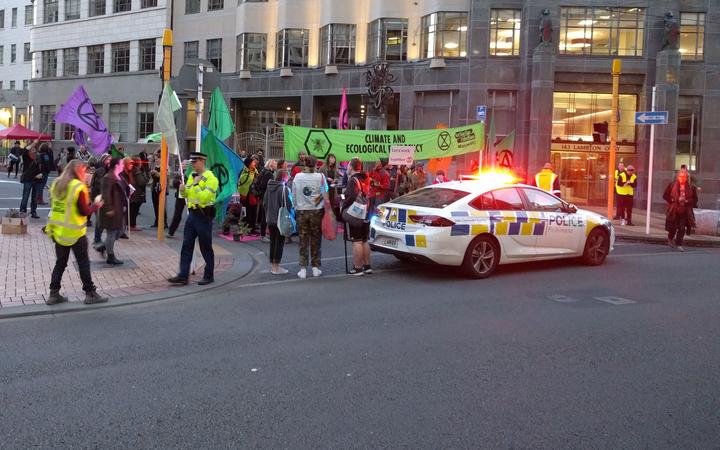 Protesters set up at Stout St on the corner with Lambton Quay. Photo: RNZ / Kent Atkinson