Formula 1 returns to the streets of Singapore this weekend - but the race coincides with the city's worst air quality in three years. 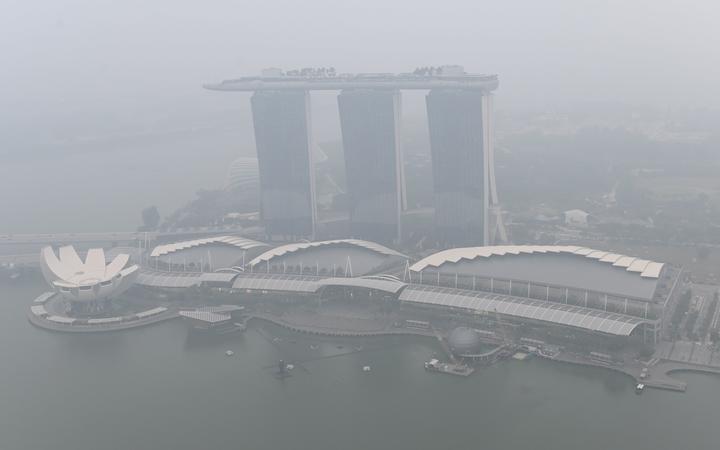 The Marina Bay Sands hotel and resort in Singapore is blanketed by haze on the eve of the grand prix. Photo: AFP

The haze, as it is called, is caused by fires in nearby Indonesia and Malaysia and is an annual problem in the region.

So just as Singapore gets ready for the F1 glitz, the usually clear blue sky has turned a foggy, faded grey.

The skyline is shrouded - and the air, officially classed as unhealthy this week, carries a burnt smell.

But Singapore and F1 officials are doing their best to try to reassure fans that it's safe to come - and that the race is on.

How will the haze affect the race?

The Singapore night race is already considered one of the most demanding of the season. If the haze persists, and visibility is poor, things will be even harder.

"It's not just a safety consideration for the drivers," meteorology expert Professor Koh Tieh Yong of the Singapore University of Social Sciences told the BBC.

"It's also about whether they can do their best. As they are going very fast, they have to look far ahead. So for the drivers, visibility would be a bigger factor than for the spectators.

"It would affect their performance even before it affects their safety."

The temperature in Singapore often exceeds 30degC and drivers have to endure about 50C in the cockpit.

Add to that a sweat-inducing 80 percent humidity, and you can imagine why the race is dubbed the Singapore Sauna.

"If you're going to have a race where the performances of your drivers are all compromised and they cannot perform as normal, then what is the point of having the race?" Mr Koh said.

"Are they really competing to the best of the their abilities - or is it just a lucky one who drove through a patch of clearer air and won?"

If visibility gets very bad, the race could even be called off. But Singapore has experienced haze during previous F1 races without any cancellations. 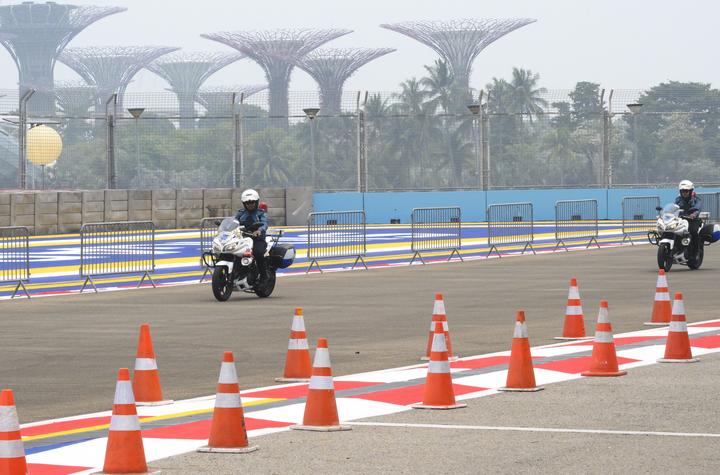 Kiwi fans decide "to deal with it'

The Singapore Grand Prix draws fans from across the globe, and many are already in the city.

"It hurts your eyes and you can taste it," said Anna-Marie Harrison from New Zealand. "It's got a really bad taste to it.

"But the night racing is cooler, it has a great atmosphere and it's not far from New Zealand, so we definitely wouldn't have changed our plans. It might still blow away!"

"You just have to deal with it," her husband Bruce agrees. "You can't turn around and get your money back - so you just carry on and make the most of it. That's life."

"I'm not worried about the haze," Nuno Gomes from Portugal said. "It's quite hot but it's going to be a fantastic weekend. The haze won't bother us." 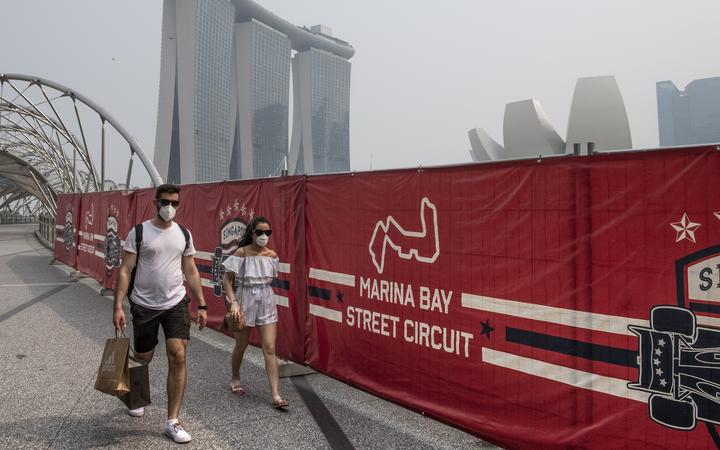 What do the organisers say?

Like the Harrisons, the F1 organisers are hoping a favourable wind may lessen the haze's impact.

"The haze situation is highly changeable," a spokeswoman said. "Not only from day to day, but from hour to hour."

So far, the race is set to go ahead - but the country is aware the situation is not ideal.

During the race weekend, city authorities and race organisers will monitor haze levels and "respond accordingly" Jean Ng, executive director with the Singapore Tourism Board, told the BBC.

For now, that means spectators will be able to buy protective N95 masks at the merchandise and information booths and there will be assistance for anyone who is unwell.

Singapore - with a population of less than 6 million - reportedly has a national stockpile of 16 million disposable masks.

But the F1 weekend is about much more than just the race - there's an abundance of activities and open air concerts that might also be affected.

And while Ms Ng confirmed that both race and entertainment events are on track she advised tourists "to exercise extra caution".

How bad is the air quality?

It's "unhealthy", according to Singapore's National Environment Agency, which monitors air quality and releases updates. There is even a haze website and a haze tracker.

Levels between 201 to 300 are "very unhealthy" and anything above that is classified as "hazardous". At its worst, in 2013, the city's PSI levels reached around 400.

In the days leading up to the race, levels were mostly above "unhealthy". On Thursday morning, the figure reached 131.

But - even though F1 fans and drivers may be uncomfortable - the situation is far worse in neighbouring Malaysia and especially Indonesia, where haze levels are significantly higher.

It's there where the fires are started, usually by farmers clearing land. Schools are closed and children, elderly, and the sick are particularly at risk.