A new storm is threatening the Bahamas just two weeks after Hurricane Dorian tore through part of the islands. 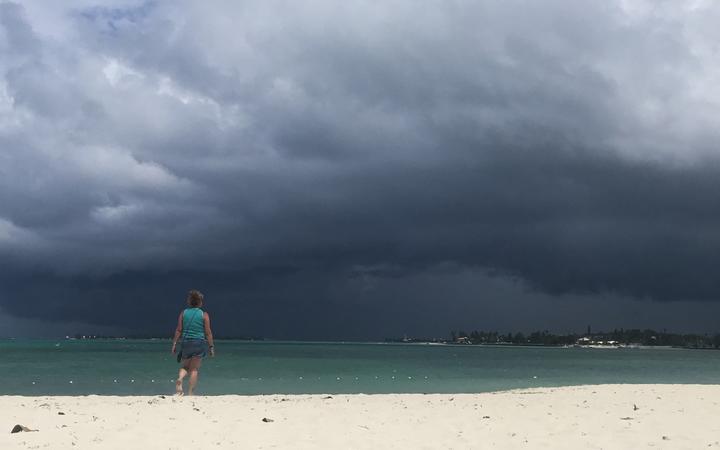 A woman walks on the beach as a storm approaches in Nassau, Bahamas. Photo: AFP

It is currently moving northwest towards Great Abaco island, one of the islands worst hit by Dorian.

About 1300 people are missing in the Bahamas following the hurricane, while at least 15,000 are in need of shelter, food and medical care.

Humberto is due to cause strong winds and heavy rains on the islands, with some areas potentially seeing 15 cm (six inches) of rain and wind speeds of 45 km/h (30 mph).

The BBC Weather service has advised that Humberto could strengthen into another hurricane over the coming days, although this is not likely to happen until it has passed over the Bahamas.

Officials have warned that flooding from the fresh storm could hamper their rescue and relief efforts.

Carl Smith, from the National Emergency Management Agency (Nema), told reporters the storm could hinder the ongoing search for missing people, as well as efforts to get essential supplies to Grand Bahama and Great Abaco - the worst hit islands.

"I hope it does not disrupt it," he said.

"We have taken precautionary measures to address the potential impact that we may encounter."

Hurricane Dorian battered the Bahamas earlier this month, killing at least 50 people. As the clean-up operation continues, the death toll is expected to rise.

Dorian was packing sustained winds of 295km/h when it made landfall at Elbow Cay on the Abacos on 1 September.

It equalled the highest winds ever recorded for a hurricane at landfall when it struck the Abaco Islands.

On Thursday the US announced $4m ($NZ6.27) in new humanitarian assistance for the Bahamas. The US Agency for International Development said the money would go towards providing shelter, food, medicine and water to those on the two worst hit islands.

More than 5000 people have been evacuated from those islands to New Providence, where the country's capital Nassau is located.