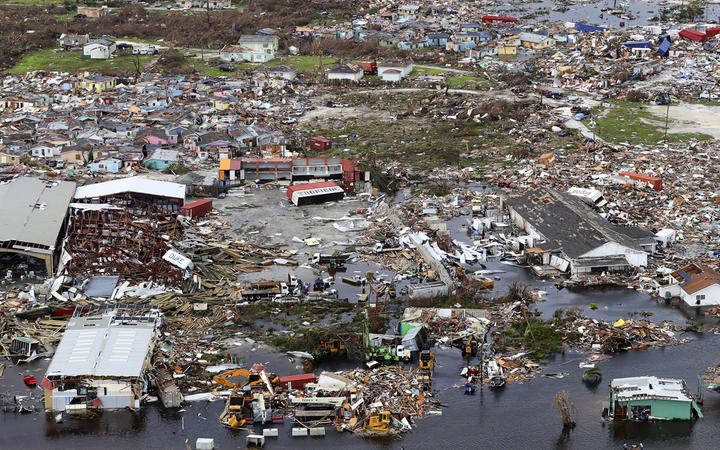 This official count suggests the death toll will be much higher than the current 50, though the number of missing has yet to be checked against those in shelters and should fall.

Tens of thousands of people remain in need of aid.

Dorian equalled the highest winds ever recorded for a hurricane at landfall when it struck the Abaco Islands.

Large areas were devastated on the Abacos and on Grand Bahama.

The list was announced by Carl Smith, a spokesman for the country's National Emergency Management Agency (Nema), but he expressed caution as a database was still being processed and some of the people already evacuated had yet to register their names.

"At this point there are approximately 2500 on the Bahamian government register," Mr Smith said at a press conference.

"This list has not yet been checked against government records of who is staying in shelters or who have been evacuated," he said.

The number is likely to fall as the cross-checking is carried out.

However, Bahamas officials earlier conceded the final death toll could be "staggering".

Aid and government officials say about 5000 people have been evacuated from the two hardest hit island groups.

Hundreds of people are being housed in temporary shelters in the capital, Nassau.

Emergency workers plan to build two tent cities around Marsh Harbour on Great Abaco Island. The town was devastated by the hurricane, which flattened shanty towns known as the Mudd and Pigeon Peas.

Some residents have complained that aid has been too slow to arrive, but the Bahamas government has defended its operations and denied covering up the true death toll.

What happened when the storm struck?

Dorian was packing sustained winds of 295km/h when it made landfall at Elbow Cay on the Abacos on 1 September. Only the 1935 Labor Day hurricane could match that for wind speed at landfall.

Dorian scythed through Great Abaco, devastating Marsh Harbour, then moved on to Grand Bahama where it lingered for almost two days before moving north.

Thousands of homes were severely damaged or destroyed and parts of the Bahamas received up to 89cm of rain, leaving vast areas flooded.

Aerial images after the storm passed showed mile upon mile of devastation.