Riots on the streets, food price rises and reduced medical supplies are real risks of the UK leaving the EU without a deal, a British government document has said. 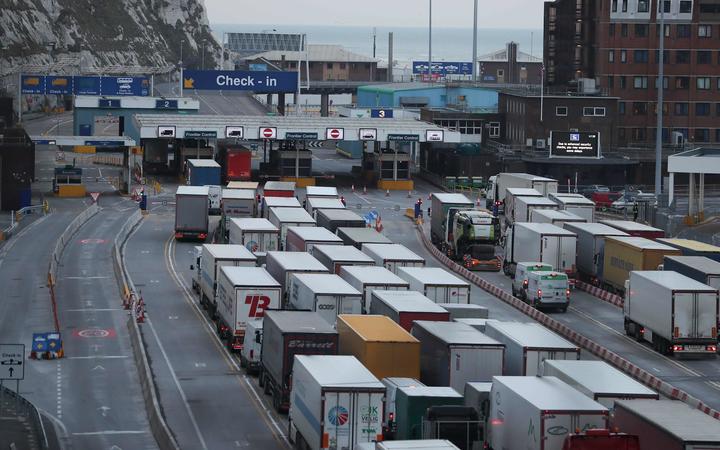 Trucks lining up at the port of Dover, southern England. The government's Yellowhammer documents said flow of cross-Channel goods could be disrupted for up to six months. Photo: AFP

Ministers have published details of their Yellowhammer contingency plan, after MPs voted to force its release.

It outlines a series of "reasonable worst case assumptions" for the impact of a no-deal Brexit on 31 October.

Labour leader Jeremy Corbyn said the paper confirmed the PM "is prepared to punish those who can least afford it".

Michael Gove, one of Boris Johnson's senior cabinet colleagues who has been given responsibility for no-deal planning, said "revised assumptions" will be published "in due course alongside a document outlining the mitigations the government has put in place and intends to put in place".

The government sought to resist the publication of the Operation Yellowhammer document, but lost a vote on the issue in the Commons on Monday, prior to the suspension of Parliament, so it was compelled it to do so.

The six-page document, dated 2 August and leaked to the Sunday Times last month, warns of disruption at Dover and other channel crossings for at least three months, an increased risk of public disorder, and some shortages of fresh food.

On food, the document says certain types of fresh food supply "will decrease" and "critical dependencies for the food chain" such as key ingredients "may be in shorter supply".

It says these factors would not lead to overall food shortages "but will reduce the availability and choice of products and will increase price, which could impact vulnerable groups".

The document also says low-income groups "will be disproportionately affected by any price rises in food and fuel".

The flow of cross-Channel goods could face "significant disruption lasting up to six months".

"Unmitigated, this will have an impact on the supply of medicines and medical supplies," it says.

"The reliance of medicines and medical products' supply chains on the short straits crossing make them particularly vulnerable to severe extended delays."

Among its other key points are:

The document also warns of potential clashes if foreign fishing vessels enter British territorial waters on the day after the UK's departure and says economic difficulties could be "exacerbated" by flooding or a winter flu pandemic.

Though said some of the scenarios outlined were stark, ministers were insisting the paper was not a prediction about what will happen.

The document, until now categorised as "official, sensitive", is not an official cabinet paper. It dates from 10 days after Mr Johnson became prime minister.

Labour's shadow Brexit secretary Keir Starmer said: "These documents confirm the severe risks of a no-deal Brexit, which Labour has worked so hard to block.

"It is completely irresponsible for the government to have tried to ignore these stark warnings and prevent the public from seeing the evidence."