The US State Department says it will host a conference in Washington next week to highlight the problem of religious persecution and has invited the victims of recent attacks to attend. 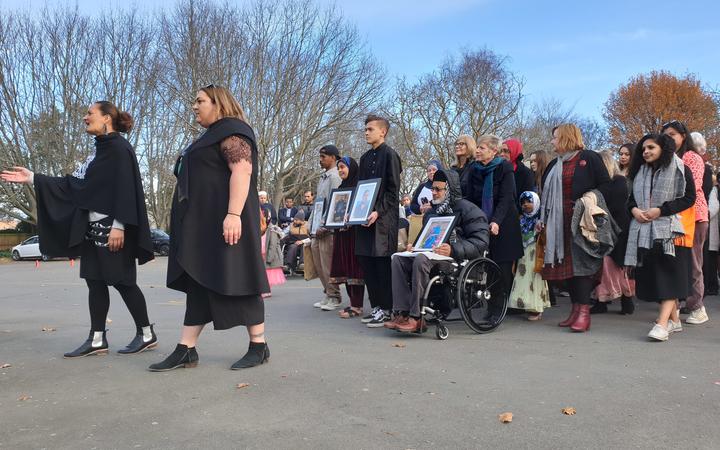 The families of victims of the Christchurch mosque attacks. Photo: RNZ / Conan Young

The invitation also extended to the victims of the Christchurch mosque attacks, victims of a white supremacist attack on a synagogue in San Diego, and the Easter Day bombings in Sri Lanka.

US ambassador for religious freedom, Sam Brownback, told reporters the second Ministerial to Advance Religious Freedom will include more than a dozen government ministers.

He said he hoped countries, which he declined to identify, would sign a US statement calling for an end to religious persecution.

Speakers will include Nobel laureate Nadia Murad, an Iraqi Yazidi woman held as a sex slave by Islamic State militants; and American evangelical pastor Andrew Brunson, who was freed after two years of detention in Turkey. Attendees will include Rohingya Muslim representatives who have fled a campaign by Myanmar's military against them.

"We hope that this will stir actions. Ultimately, we're after a grassroots movement," Mr Brownback said.

"Over 70 percent of the world lives in a religious-restrictive environment, and many cases, unfortunately, a deadly environment."

Officials from "like-minded" countries have been invited to attend, he said.

Asked whether these include Myanmar, Mr Brownback said, "We wouldn't put them in either the category of like-minded or aspirational at this point in time."

The United Nations has estimated that some 730,000 Rohingya have fled to Bangladesh amid a military crackdown against the Muslim minority.

The country's army chief has denied any systematic persecution of the Rohingya, saying forces have carried out legitimate counterinsurgency operations.

The Trump administration has highlighted rights abuses against China's Muslim minority in Xinjiang and threatened to impose sanctions against companies and officials linked to China's crackdown.

Mr Brownback said he was encouraged by the "positive direction" of countries such as Uzbekistan, where he said 13,000 political and religious prisoners had been released from jail and the government had registered some churches.