The US State Department has voiced concern over China's "worsening crackdown" on minority Muslims in the Xinjiang region, as the Trump administration considers sanctions against Chinese senior officials and companies linked to alleged human rights abuses. 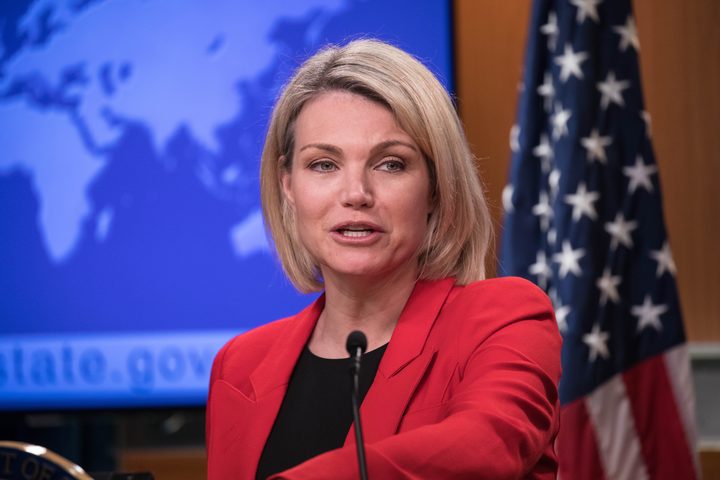 US Department of State spokesperson Heather Nauert said her administration was "deeply concerned'' about reports of mass detentions. Photo: AFP

Discussions have gained momentum recently within the US government over possible economic penalties in response to reports of mass detentions of ethnic Uighurs and other Muslims, which has prompted a growing international outcry, US congressional sources said.

Any sanctions decision would be a rare move on human rights grounds by the Trump administration against China, with which it is engaged in a major trade war while also seeking Beijing's help to resolve a standoff over North Korea's nuclear weapons.

A US official said the idea of sanctions was still in the discussion stage.

"We're deeply troubled by the worsening crackdown, not just on Uighurs (but also) Kazakhs, other Muslims in that region of China," State Department spokeswoman Heather Nauert told a news briefing, renewing concerns expressed in recent months by top administration officials.

She acknowledged that the State Department had received a letter from a bipartisan group of US lawmakers at the end of August asking Secretary of State Mike Pompeo to impose sanctions on a number of Chinese officials accused of overseeing the policies. Those included Chen Quanguo, Communist Party chief in Xinjiang and also a member of the Party's politburo.

Also under consideration are sanctions the lawmakers sought against several Chinese companies involved in building detention camps and creating surveillance systems used to track and monitor Uighurs, according to one of the congressional sources.

"We have a lot of tools at our disposal. But I'm not going to get ahead of any potential activity that the US government may take," Nauert said. "We're not going to preview any sanctions that may or may not happen."

China earlier today called for United Nations human rights chief Michelle Bachelet to respect its sovereignty after she urged Beijing to allow monitors into the restive far western region and expressed concern about the situation there.

Beijing has said Xinjiang faces a serious threat from Islamist militants and separatists who plot attacks and stir up tension between the mostly Muslim Uighur minority who call the region home and members of the ethnic Han Chinese majority.

Last month, a UN rights panel said it had received credible reports that up to 1,000,000 ethnic Uighurs may be held in extra-legal detention in Xinjiang, and called for them to be freed.

US sanctions could be imposed under the Global Magnitsky Act, a federal law that allows the US government to target human rights violators around the world with freezes on any US assets, US travel bans, and prohibitions on Americans doing business with them.