The 2018 Nobel Peace Prize has gone to campaigners against rape in warfare, Nadia Murad and Denis Mukwege. 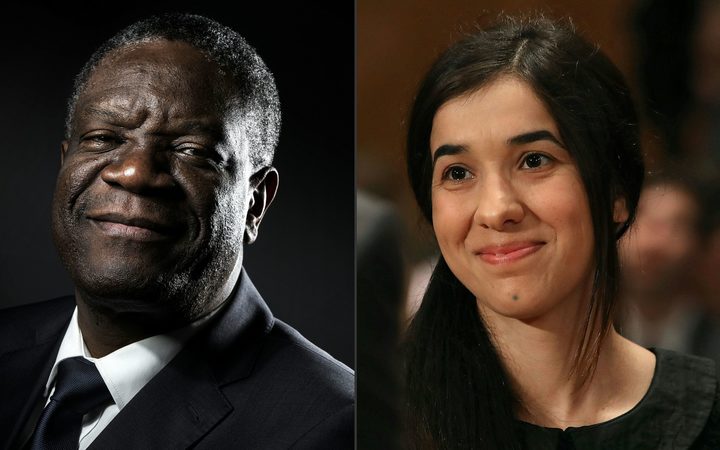 Ms Murad is an Iraqi Yazidi who was tortured and raped by Islamic State militants and later became the face of a campaign to free the Yazidi people.

Dr Mukwege is a Congolese gynaecologist who, along with his colleagues, has treated tens of thousands of victims.

Some 331 individuals and organisations were nominated for the prestigious peace award this year.

The winners announced in the Norwegian capital Oslo on Friday won the award for their "efforts to end the use of sexual violence as a weapon of war", Berit Reiss-Andersen, the Nobel committee chair, said.

The pair both made a "crucial contribution to focusing attention on, and combating, such war crimes", Ms Reiss-Andersen added.

How have the winners reacted?

Ms Murad, 25, said in a statement that many Yazidis would "look upon this prize and think of family members that were lost, are still unaccounted for, and of the 1,300 women and children, which remain in captivity".

"For myself, I think of my mother, who was murdered by DAESH [IS], the children with whom I grew up, and what we must do to honour them," she added.

"Persecution of minorities must end. We must work together with determination - to prove that genocidal campaigns will not only fail, but lead to accountability for the perpetrators and justice for the survivors."

New Iraqi President Barham Saleh called the award "an honour for all Iraqis who fought terrorism and bigotry".

I met Nadia Murad just the day after she managed to escape from #Mosul. I told her we can film the interview anonymously but she refused, “No let the world see what happened to us” she said ... She is now a noble peace prize winner. #Yazidi #Izadi #NadiaMurad pic.twitter.com/QMcvrH6UZB

Dr Mukwege was operating at his hospital when he heard he had won the prize.

"I was in the operating room so when they started to make noise around [it] I wasn't really thinking about what was going on, and suddenly some people came in and told me the news," he told Norwegian newspaper VG.

He dedicated his award to all women affected by sexual violence.

"This Nobel prize is a recognition of the suffering and the failure to adequately compensate women who are victims of rape and sexual violence in all countries around the world," he told reporters gathered outside his clinic.

Who is Nadia Murad?

Ms Murad did not just lose her mother in the genocide. She endured three months as a sex slave at the hands of IS militants. She was bought and sold several times and subjected to sexual and physical abuse during her captivity.

After escaping, she became an activist for the Yazidi people, campaigning to help put an end to human trafficking and calling on the world to take a tougher line on rape as a weapon of war.

Ms Murad described her escape in a BBC interview in 2016, detailing how the women who were held captive were treated by IS.

She was awarded the Vaclav Havel Human Rights Prize by the Council of Europe in 2016 and called for an international court to judge crimes committed by IS in her acceptance speech in Strasbourg.

Ms Murad, the first Iraqi to win the award, was named the UN's first goodwill ambassador for survivors of human trafficking later that year.

Who is Denis Mukwege?

He has spent decades helping rape victims in the Democratic Republic of Congo.

He and his colleagues are said to have treated about 30,000 rape victims, developing great expertise in the treatment of serious injuries sustained during sex assaults that were carried out as a weapon of war.

The 63-year-old has won a number of international prizes, including the 2008 UN Human Rights Prize, and was named African of the Year in 2009.

He lives under the permanent protection of UN peacekeepers at his hospital and has also previously called for a tougher line on rape as a weapon of war.