A United States' pastor has met President Donald Trump at the White House after more than two years' detention in Turkey. 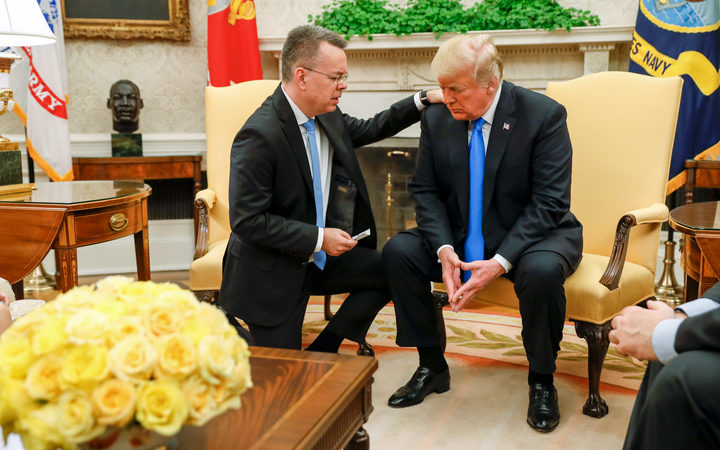 Andrew Brunson appeared in the Oval Office with President Trump following a case that has strained relations between the two countries.

Mr Brunson thanked the president and his administration for securing his release - and prayed for him.

He said the US had been working "long and hard" to secure Mr Brunson's release, and told Mr Brunson he had "galvanised this country" with his strength and faith.

Mr Brunson was arrested over alleged links to political groups, including the banned Gulenist movement, after a failed coup attempt in 2016.

On Friday, a Turkish court sentenced Mr Brunson to three years in jail - but freed him because of the time he had already spent in detention.

Additional espionage charges against him were also dropped by the court.

Mr Trump called the release a "tremendous step" towards a "great relationship" with Turkey.

He insisted there had been no deal made with Turkey, but said the US would reconsider its "very tough" sanctions on the country.

Mr Trump said the US felt "very differently about Turkey" in light of the pastor's release.

When asked by a reporter if the release had any relation to the disappearance of journalist Jamal Khashoggi in a Saudi consulate in Istanbul, the president said the timing was "strict coincidence".

There was NO DEAL made with Turkey for the release and return of Pastor Andrew Brunson. I don’t make deals for hostages. There was, however, great appreciation on behalf of the United States, which will lead to good, perhaps great, relations between the United States & Turkey!

What did Brunson say?

The pastor kneeled down to pray for Mr Trump in the Oval Office, asking that the president be made "a great blessing to this country".

He then told reporters that he and his wife now wished to spend time with their children.

In a statement earlier, Mr Brunson said his whole family "thanks the president, the administration and Congress for their unwavering support".

After his release on Friday he flew from Izmir in western Turkey to a US base in Germany, and then on to Andrews Air Force Base in Maryland.

What was he accused of?

Mr Brunson lived in Turkey with his wife and three children for more than 20 years, most of it working for the small Izmir Resurrection Church, which had a congregation of about two dozen people.

He was arrested in October 2016. The authorities accused him of having links with the outlawed Kurdistan Workers' Party (PKK) and the Gulenist movement, which Turkey blames for the 2016 failed coup.

In July 2018 he was released from prison for health reasons and moved to house arrest until his trial. A few weeks later, the US imposed sanctions on Turkey's justice and interior ministers over his continued detention.

Mr Brunson and US officials insisted he was innocent of all charges.

Dressed in a black suit, white shirt and red tie, Mr Brunson, who was one of 20 Americans charged after the coup attempt two years ago, told the court he was "an innocent man".

The pastor was convicted on charges of aiding terror groups while not being a member of them, and sentenced to three years in prison. The court took into account the time he had already spent in detention, lifting his house arrest and overseas travel ban.

When the verdict was read out, he wept and hugged his wife Norine.