Moves to ease Turkey's economic woes have failed to stop market turmoil as the country's row with the US deepens. 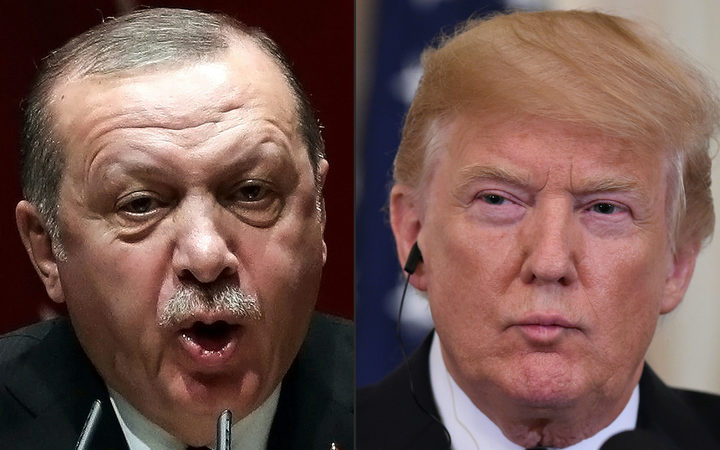 Turkey's President, Recep Tayyip Erdogan, said on Monday that the US was seeking to "stab it in the back".

The US last week imposed sanctions on Turkey over its refusal to extradite a US preacher imprisoned in the country.

The sanctions caused market turmoil, which the central bank attempted - but failed - to soothe with a series of market-boosting measures.

"We are together in NATO and then you seek to stab your strategic partner in the back."

As the crisis deepened at the end of last week, the lira (the Turkish dollar) and the Turkish stock market slid sharply. Mr Erdogan, who has presided over soaring inflation and borrowing levels, said the lira's fall was the result of a plot rather than prevailing economic conditions.

Turkey's interior ministry said it was taking legal action against 346 social media accounts it claimed had posted comments about the weakening lira "in a provocative way".

Why are Turkey and the US at odds?

The dispute centres on Turkey's refusal to release US pastor Andrew Brunson.

Mr Brunson has been detained for nearly two years, accused of links to the outlawed Kurdistan Workers' Party and the Gulenist movement, which Turkey blames for a failed coup in 2016.

The Turkish president is angry that the US has not taken more action against the Gulenist movement and what he said was a failure "to unequivocally condemn" the 2016 coup attempt. The US has refused to extradite Fethullah Gulen, who lives in Pennsylvania.

US support for Kurdish rebel groups fighting Islamic State (IS) fighters in northern Syria is another major difficulty, given Turkey's battle against a Kurdish insurgency in its own country.

Mr Erdogan has also been getting closer to Russia. That creates an awkward triangle, given that Turkey is a Nato member, Russia is NATO's number one threat and the organisation is obliged to defend any member that is attacked.

NATO uses the Incirlik Air Base in Turkey to fight against IS and there has been some domestic pressure on Mr Erdogan to close it.

What is happening to the lira?

The lira's worst day was Friday, when US President Donald Trump approved the doubling of tariffs on Turkish steel and aluminium, following Turkey's refusal to free a US pastor who has been in detention there for nearly two years.

Experts have blamed the drop in the Turkish lira on fears that the country is descending into an economic crisis.

Investors are worried that Turkish companies that borrowed heavily to profit from a construction boom may struggle to repay loans in dollars and euros, since the weakened lira means there is now more to pay back.

More than a third of Turkish banks' lending is in foreign currencies, according to Reuters.

Although the lira rose slightly after the central bank's move to support the economy, it still hit a new record low against the dollar.

Investors globally fear the damage spreading and have been prompted to sell riskier assets, including other emerging market currencies.

In midday trading in Europe, London's 100-share index was down 0.6 percent, while the German and French share markets were down by 0.3 percent and 0.7 percent.

What are Turkish officials doing about the lira?

The Turkish Central Bank announced on Monday that banks would be given all the liquidity - help to keep money moving - they needed.

But the bank did not increase interest rates, which would help contain inflation while supporting the lira.

It is not clear if this comes after Mr Erdogan's pressure. The president is famously averse to interest rate rises.

He has dismissed the fall of the currency as "a storm in a tea cup" and urged Turks to sell dollars and buy lira to help boost the currency.