Volunteers have begun burying victims of Indonesia's deadly earthquake and tsunami in a mass grave. 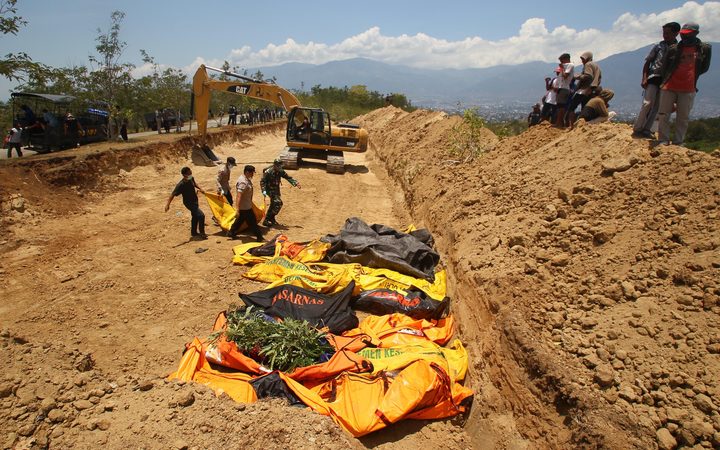 Officers bring the bodies of victims of the earthquake and tsunami to bury them in Palaroa village, in the city of Palu, Central Sulawesi, Indonesia. Photo: AFP

Friday's disaster devastated swathes of the eastern Sulawesi island and has left at least 844 people dead.

Some remote areas have yet to be contacted, and there are fears that the death toll could rise further.

A lack of heavy lifting equipment is hampering rescuers' attempts to reach people who remain alive in the ruins of collapsed buildings.

Dozens of people are feared to be underneath the rubble of one hotel alone, the Roa-Roa in the devastated resort of Palu.

In Sigi, south of Palu, the bodies of 34 children were found at a church which was engulfed in mud and debris, Indonesia Red Cross spokeswoman Aulia Arriani was quoted as saying by Reuters.

She said the children were on a "Bible camp".

Indonesia's National Disaster Mitigation Agency confirmed to the BBC that none of the country's tsunami detector buoys were working before Sulawesi was hit.

Agency spokesman Sutopo Purwo Nugroho said the 21 floating detection units - which are connected to deep sea sensors - had been damaged by vandals or stolen.

A tsunami warning was still sent out - but it appears to have drastically underestimated the scale of the waves that would follow.

Many people in Palu did not receive alerts because of power cuts caused by the tremor. There were also no sirens located along the coast. 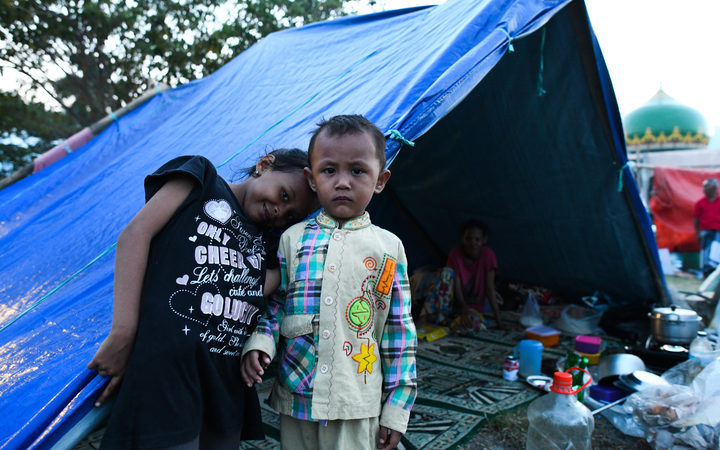 Tents have been set up on a field of a mosque for people to take refuge in Palu, Indonesia's Central Sulawesi. Photo: AFP or licensors

What's the current situation on the ground?

"Communication is limited, heavy machinery is limited ... it's not enough for the numbers of buildings that collapsed," Sutopo Purwo Nugroho said.

Yenni Suryani, of Catholic Relief Services, said aid agencies were struggling to get staff into affected areas as the main airport at Palu was damaged, landslides had cut road links and "power is out almost everywhere".

Some survivors have been looting shops for food, water and fuel, telling reporters they have run out of supplies.

Government officials say some 1,200 inmates escaped from three prisons in the region as the quake struck. 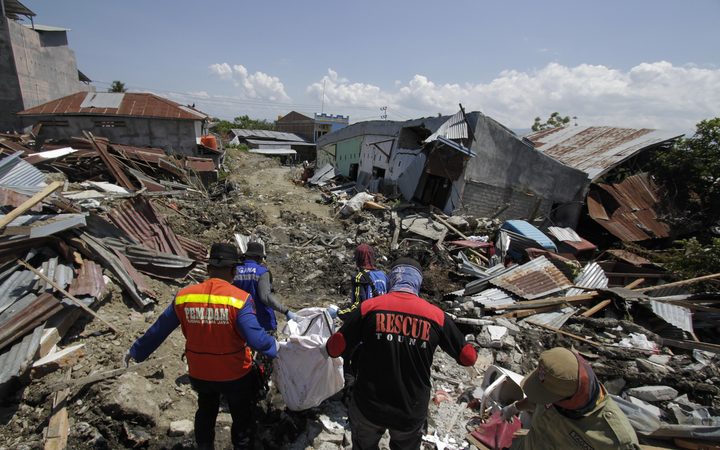 The death toll from the 7.7-magnitude earthquake and tsunami on the island of Sulawesi has risen to 1,203, the country's disaster management agency said on Sunday. Photo: AFP

In the hills above Palu, volunteers filling a mass grave were instructed to prepare for a total of 1,300 victims to arrive.

Trucks arrived with bodies wrapped in orange, yellow and black body bags. They were dragged into the grave and motorised diggers poured earth on top.

But many people are still looking for missing loved ones.

Adi told AFP he was hugging his wife by the beach in Palu when the tsunami struck, and has not seen her since.

"When the wave came, I lost her," he said. "I was carried about 50 metres. I couldn't hold anything."

Why was the tsunami so destructive?

The 7.5-magnitude quake occurred at a depth of 10km just off Sulawesi at 18:03 local time on Friday, setting off a tsunami.

A warning system was put in place across the whole Pacific region after the 2004 disaster, which killed nearly a quarter of a million people.

Videos show people screaming as waves 6m high power over the beach - where a festival was being set-up - sweeping up everything in their path.

Indonesia lies on the Pacific "Ring of Fire" where tectonic plates collide and many of the world's volcanic eruptions and earthquakes occur.