An Indonesian air traffic controller has been hailed a hero after losing his own life while ensuring a passenger plane got away from a deadly earthquake. 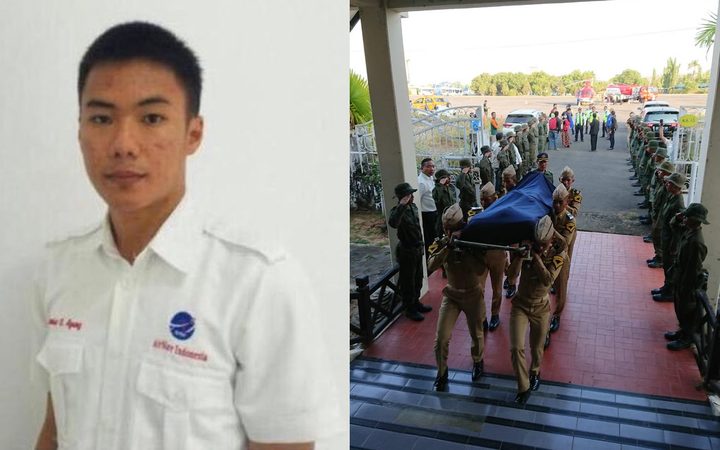 Anthonius Agung died while working as an air traffic controller during the Indonesian earthquake, with his body carried away for burial by local soldiers. Photo: Twitter / @AirNav_Official

Anthonius Gunawan Agung, 21, was at the control tower of Palu airport in central Sulawesi when the 7.5 magnitude quake struck on Friday.

He waited until the plane was airborne before jumping from the control tower.

He died before he could be transferred to a specialist hospital.

"Agung dedicated himself to his job until the end of his life and did not leave the control tower until the plane took off," Didiet KS Radityo, the corporate secretary for Air Navigation Indonesia, told the Jakarta Post.

Mr Agung was giving clearance to a Batik Air plane to take off when the earthquake struck.

As the four-story control tower began to shake and crumble, he chose to jump out a window, breaking his legs, arms and ribs as a result.

He was taken to hospital but died before a helicopter that would have taken him to a specialist hospital arrived.

His has been posthumously promoted by two ranks, "as a form of appreciation for his outstanding dedication towards the deceased" said the organisation.

The organisation also showed soldiers carrying his body as it was transported for burial.

The tale of his sacrifice quickly spread online, where he was hailed a hero.

The earthquake occurred just off the Indonesian island of Sulawesi on Friday, setting off a tsunami.

Many people were on the beach in Palu, preparing for a festival, and were caught when the waves swept in.