At least 832 people were killed in the devastating earthquake and tsunami that hit the Indonesian island of Sulawesi, the national disaster agency says. 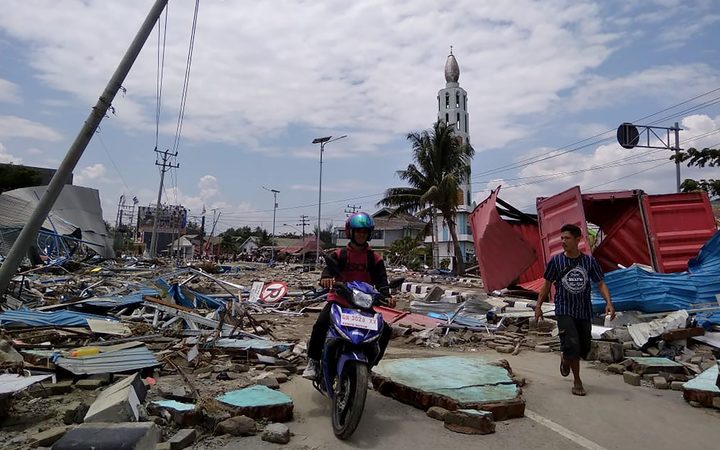 Residents make their way along a street full of debris after an earthquake and tsunami hit Palu, on Sulawesi island on 29 September 2018. Photo: AFP

It added that the affected area was bigger than initially thought.

Many people were reported trapped in the rubble of buildings that collapsed in Friday's 7.5-magnitude earthquake, agency spokesman Sutopo Purwo Nugroho told a news conference.

The quake had triggered tsunami waves as high as 6 metres, he added.

Rescuers have been digging by hand in the frantic search for survivors in the Indonesian city of Palu.

Search efforts are being hampered by blocked roads and a collapsed bridge.

The Red Cross estimates that more than 1.6 million people have been affected by the earthquake and tsunami.

There are particular concerns about the town of Donggala, where the impact is still unclear.

"This is already a tragedy, but it could get much worse," the Red Cross said in a statement.

Yenni Suryani, the Indonesia country manager for the aid agency Catholic Relief Services, said Donggala appears to be inaccessible by road or air and that help may have to come by sea.

Strong aftershocks have continued to hit the island since Friday's earthquake.

A World Vision New Zealand spokesperson, Tilly Redstone, said all its people in Indonesia had been accounted for and were okay.

She said communication was difficult and the aid organisation had been struggling to get a proper ground assessment.

Ms Redstone said the areas hit by the quake and tsunami were densely populated with poor and vulnerable people. The charity worked with about 4000 children in the affected area, she said.

What is the situation in Palu?

Rescue teams dug by hand to free 24 people trapped in the rubble of the Roa-Roa hotel in the city of Palu.

The hotel's owner told local media people could still be heard crying out for help, but said that no heavy lifting equipment was available to rescue them.

Dozens remain missing in the city of 335,000, some thought to be trapped in the debris of collapsed buildings.

Bodies have been lying in city streets and the injured are being treated in tents because of damage to hospitals.

Anxious survivors in Palu bedded down in the open air on Saturday night, heeding advice by officials not to return to their homes as a precaution. 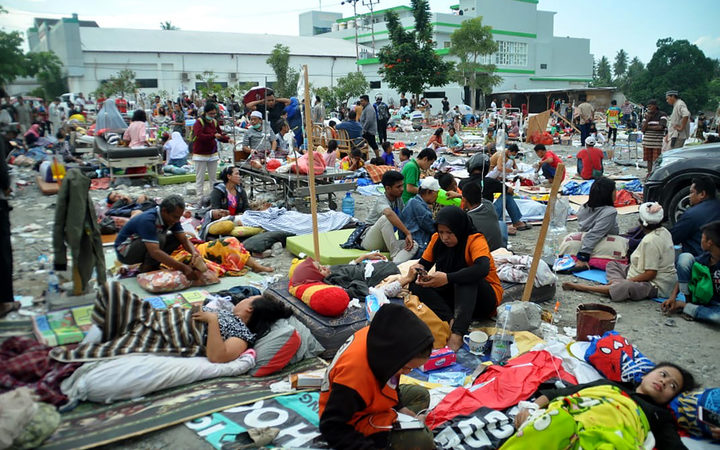 Medical team members help patients outside a hospital after an earthquake and a tsunami hit Palu, on Sulawesi island. Photo: AFP

Why were so many killed on Friday?

The 7.5 magnitude quake occurred at a shallow depth of 10km just off the central island of Sulawesi at 18.03 (local time), triggering a tsunami, US monitors say.

Many people were on the beach in Palu, preparing for a festival, and were caught when waves up to 3m in height swept in.

As well as destroying homes, the quake wrecked a shopping centre, a mosque, a hotel and a road bridge. 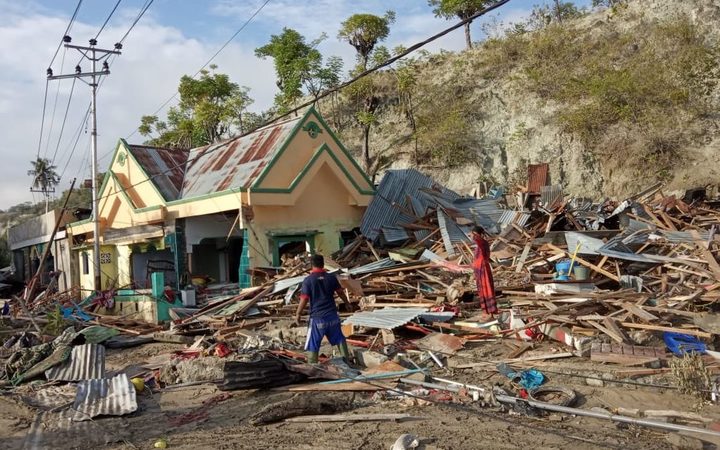 Damage in the Indonesian city of Palu after the earthquake and tsunami. Photo: Supplied / World Vision

What do survivors say?

When the quake hit, "we all panicked and ran out of the house," Anser Bachmid, 39, told AFP news agency. "People here need aid - food, drink, clean water. We don't know what to eat for dinner tonight."

"I just ran when I saw the waves hitting homes on the coastline," Palu resident Rusidanto said.

Dwi Haris, who was in the city for a wedding, was staying in a hotel with his wife and daughter when the quake struck.

"There was no time to save ourselves," he told the Associated Press news agency. "I was squeezed into the ruins of the wall... I heard my wife cry for help but then silence. I don't know what happened to her and my child. I hope they are safe."

With back and shoulder injuries, he is being treated outdoors at Palu's Army Hospital.

What is being done to help?

Aid is being flown from the capital Jakarta into Palu airport, using the part of its runway still intact.

Patients are being treated in the open outside city hospitals and at least one military field hospital has been erected.

The regional head of the Indonesian Doctors Association (IDI), Komang, asked the authorities for immediate help.

"We need tents, medicines, medical personnel, tarpaulins, blankets and more of other things," he said.

The UK-based charity Save the Children is sending an assessment team to the disaster zone.

"Unfortunately the more information that we're getting, the worse the situation appears to be," charity spokesman Tom Howells told the BBC from Jakarta.