Dozens of people are thought to be trapped under the rubble of buildings in the Indonesian city of Palu following an earthquake and tsunami. 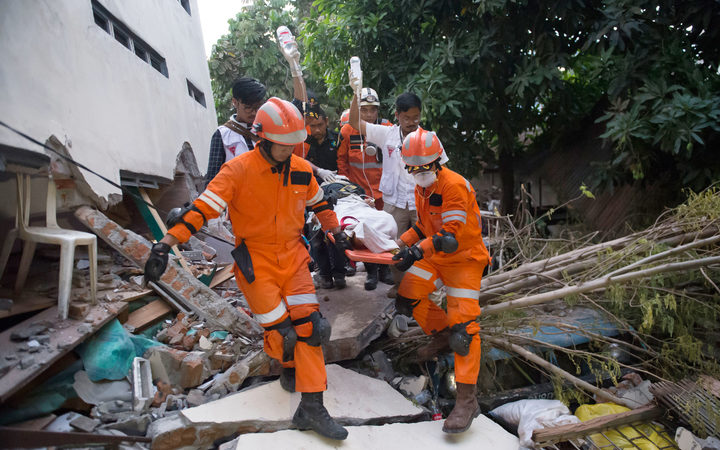 Rescuers are awaiting heavy machinery to search the ruins of a hotel and a shopping centre as aftershocks made it unsafe for them to go in.

They have been getting water and food to some of those trapped, who have been screaming for help to get out.

The quake and tsunami killed at least 832 people, officials say.

The national disaster agency has announced plans for mass graves and one that was being dug on Sunday night is expected to hold at least 300 bodies.

How difficult is the rescue work?

Local media report that mobile phone signals have been detected in the rubble of the shopping mall and shouts can be heard under the debris of the Roa Roa Hotel.

One volunteer, Thalib Bawano, told AFP news agency that three people had been rescued from the hotel rubble, where more than 50 people may be trapped.

"We also heard voices at several points, including a child," he said.

"They were asking for help, but they are still there till now. We gave them motivation ... so they can have spirit because they are trapped between life and death."

"We gave them water and food but that's not what they wanted. They wanted to get out. 'We want to get out, out, out. Help! Help!' they kept screaming. That's what we heard. Some were just knocking."

Blocked roads, a damaged airport and broken telecommunications have made it difficult to bring help into the affected area. 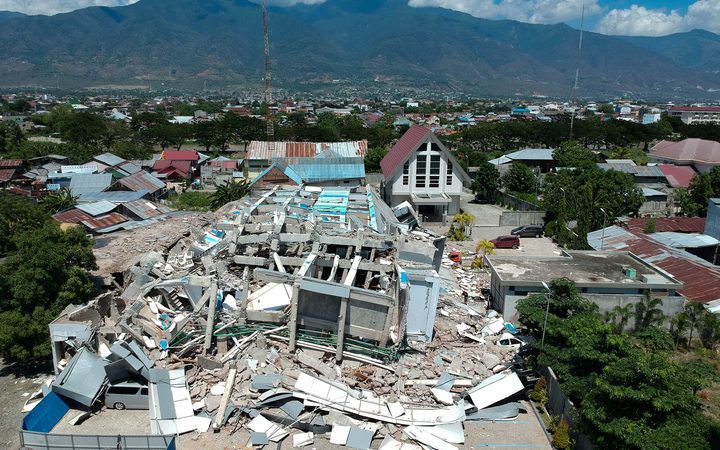 This aerial picture shows the remains of a ten-storey hotel in Palu in Indonesia's Central Sulawesi. Photo: AFP

What are the other challenges?

Survivors of the disaster have been sleeping in the open, wary of returning to their homes, even if they are still intact.

With hospitals damaged, injured people have been treated in the open and at least one military field hospital has been set up.

The military has taken over the airport to fly aid in, and injured people and other evacuees out.

"What you'll see, you know, as the days go by and people don't have access to adequate hygiene supplies, shelter, you'll see the situation deteriorate if they don't get that access so, we've sent shelter kits," Tom Howells, programme director for Save The Children, said on Sunday.

Power is down in much of the area and so are mobile phone signals. Very little has been heard from other communities along the coast, which are also likely to have been hit hard by the tsunami. 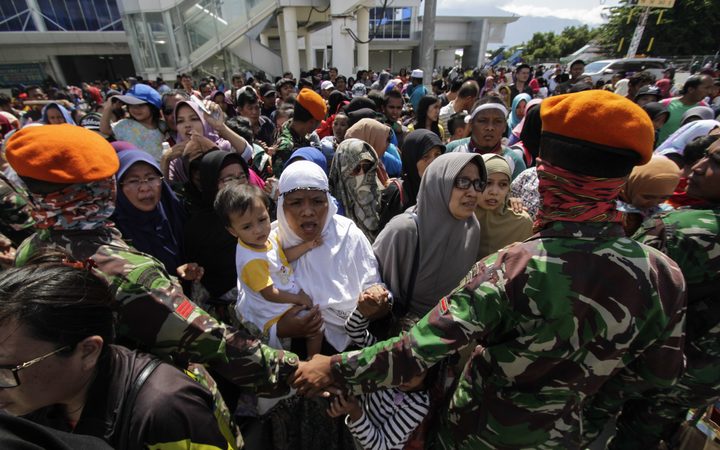 Residents queue to board a Hercules aircraft belonging to the Indonesian Air Force, as they are being evacuated after the earthquake and tsunami that hit the city. Photo: AFP

Why were so many killed on Friday?

The 7.5 magnitude quake occurred at a depth of 10km (6.2 miles) just off the central island of Sulawesi at 18:03 (local time) on Friday, setting off a tsunami, US monitors say.

Many people were on the beach in Palu, preparing for a festival, and were caught when the waves swept in.

Meanwhile, the New Zealand Red Cross is on standby to help in the aftermath.

She said they are providing immediate support to survivors, like food, water, first aid and shelter.

It will be some time before the full extent of the devastation is known, she said.