US President Donald Trump has insisted he has the "complete power" to pardon people, amid reports he is considering presidential pardons for family members, aides and even himself. 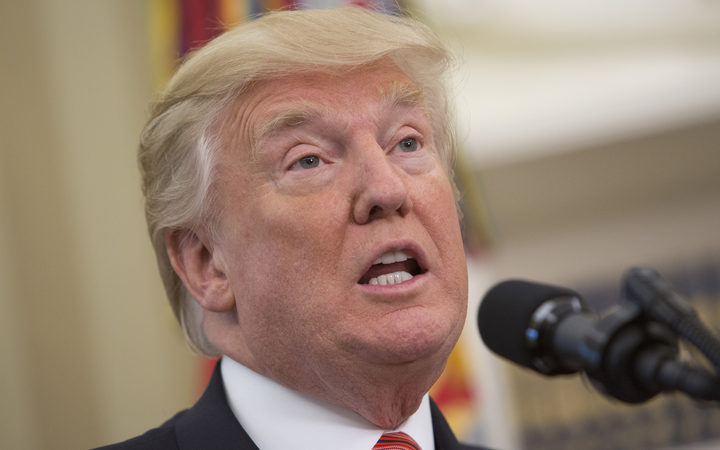 A Democratic Party spokesman has called the reports "extremely disturbing".

The US authorities are probing possible collusion between the Trump team and Russia. Intelligence agencies think Russia tried to help Mr Trump to power.

Russia denies this, and the president says there was no collusion.

The Washington Post reported on Thursday that Mr Trump and his team were looking at ways to pardon people close to him.

Presidents can pardon people before guilt is established or even before the person is charged with a crime.

Describing the reports as disturbing, Senator Mark Warner, a Democrat who sits on the House Intelligence Committee, said "pardoning any individuals who may have been involved would be crossing a fundamental line".

On Saturday, Mr Trump tweeted: "While all agree the U. S. President has the complete power to pardon, why think of that when only crime so far is LEAKS against us. FAKE NEWS."

The Washington Post gave an account of meetings Attorney General Jeff Sessions held with the Russian ambassador to the US, Sergey Kislyak. The newspaper quoted current and former US officials who cited intelligence intercepts of Mr Kislyak's version of the encounter to his superiors.

One of those quoted said Mr Kislyak spoke to Mr Sessions about key campaign issues, including Mr Trump's positions on policies significant to Russia.

During his confirmation hearing earlier this year, Mr Sessions said he had no contact with Russians during the election campaign. When it later emerged he had, he said the campaign was not discussed at the meetings.

An official confirmed to Reuters the detail of the intercepts, but there has been no independent corroboration.

The officials spoken to by the Post said that Mr Kislyak could have exaggerated the account, and cited a Justice Department spokesperson who repeated that Mr Sessions did not discuss interference in the election.

But the Post's story was the focus of one of many tweets the US president fired off on Saturday morning.

"A new INTELLIGENCE LEAK from the Amazon Washington Post, this time against A.G. Jeff Sessions. These illegal leaks, like Comey's, must stop!" Mr Trump said.

The Washington Post is owned by Amazon founder Jeff Bezos, who has has been an occasional sparring partner for Mr Trump. "Comey" refers to James Comey, the former FBI boss Mr Trump fired.

Earlier this week, Mr Trump told the New York Times he regretted hiring Mr Sessions because he had stepped away from overseeing an inquiry into alleged Russian meddling in the US election.

Mr Sessions recused himself in March amid pressure over his meetings with Mr Kislyak. He says he plans to continue in his role as attorney general.

Several other regular targets for Mr Trump featured in his series of tweets.

He accused the "failing" New York Times of foiling an attempt to assassinate the leader of the Islamic State group, Abu Bakr al-Baghdadi.

It is not clear what Mr Trump was referring to, but on Saturday a US general complained on Fox News that a "good lead" on Baghdadi was leaked to a national newspaper in 2015.

A New York Times report at the time revealed that valuable information had been extracted from a raid, but the paper stressed on Saturday that no-one had taken issue with their reporting until now.

And Mr Trump again urged Republicans to "step up to the plate" and repeal and replace his predecessor Barack Obama's healthcare reforms, a key campaign pledge of his that has collapsed in Congress.