Hillary Clinton has won the Puerto Rican Democratic primary, moving her a step closer to her party's presidential nomination over rival Bernie Sanders. 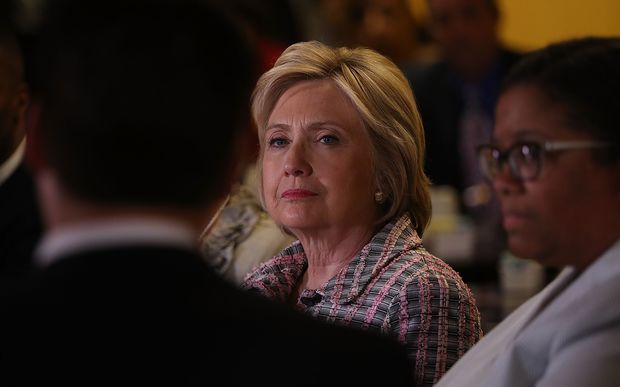 Democratic presidential candidate Hillary Clinton campaigns in Vallejo, California ahead of the primary contest there on June 7. Photo: AFP

Mrs Clinton has more than 60 percent of the vote, compared with just over 35 percent for Mr Sanders, according to projections.

The win gives the former secretary of state a boost ahead of a big night on Tuesday, when six states, including New Jersey and California, will hold nominating contests.

Mrs Clinton was hoping to cross the threshold of 2382 delegates needed to secure the nomination for the 8 November presidential election as early as 8pm Eastern time on Tuesday (12pm Wednesday in New Zealand), when polls close in New Jersey.

That count would include superdelegates - party leaders and elected senators, members of Congress and governors who can cast their own vote at the Democratic Party convention in July.

She and Vermont senator Mr Sanders were in a dead heat in California.

But delegates in the state are awarded on a proportional basis, so even a loss there for Mrs Clinton would be unlikely to stop her from securing her party's nomination and a likely general election contest with presumptive Republican nominee Donald Trump.

Mr Sanders has vowed to use California as a springboard to the party convention in Philadelphia.

A win, especially a big one, would validate the self-described democratic socialist's decision to stay in the race to the end and give him leverage to influence Mrs Clinton's policies and cabinet picks.

Ahead of Puerto Rico's nominating contest, Mrs Clinton had been just 60 delegates shy of clinching the nomination.

Networks reported huge voter turnout and long lines in Puerto Rico, with just over 430 polling stations open compared with over 2000 in 2008.

The island is suffering through a severe debt crisis, which has hampered basic government services.

Meanwhile, Mrs Clinton had opened up a double-digit lead over Mr Trump, according to a Reuters/Ipsos poll released on Friday.

The poll results showed 46 percent of likely voters supporting Mrs Clinton, 35 percent supporting Mr Trump and another 19 percent saying they would not support either.

The survey, which questioned 1421 people, was conducted between 30 May and 3 June.