ANALYSIS: As the US presidential election primary season winds down, the media will start reporting more and more stories about polls for the main event. Phil Smith wades through the numbers and decodes the polls that count. 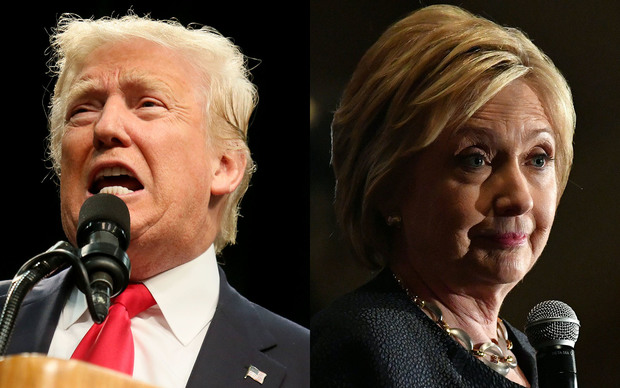 It's true that the primary season doesn't finish until 14 June, and the party conventions to crown the candidates in Cleveland and Philadelphia are not until late July.

But as entertaining or horrifying as all that may be, it's now a sideshow. The big top is raised, the clowns are japing and the main event is underway. You can hear the barkers already: "Roll-up, roll-up, watch the fight. The Lady and the Trump. Which one does America hate more?"

And there's the rub. The narrative is now Trump versus Clinton for all of America. The polls are coming thick and fast and most are a head-to-head for the national popular vote. Or, in this unusual election, the national unpopular vote.

National polls are irrelevant. Interesting, but irrelevant. They help a simple horse race narrative and they make easy copy - 'Clinton Nudges Ahead', 'Trump is Trumps' - but unless they become so one-sided that they create a self-fulfilling landslide narrative, you can ignore them.

The presidential election is not a national vote, as President Al Gore can attest. In 2000, Al Gore won the popular vote by more than half a million but still lost the election to George W. Bush (Though you might think he lost by a single vote - in the Supreme Court.)

It wasn't the first time, and it has happened here as well - Rob Muldoon beat Bill Rowling twice in a row with fewer votes but more electorates.

The popular vote simply does not count. The only number that counts is 270 - the number of votes required to win the electoral college. And those votes are gained by winning states. Each state is a contest in itself.

A guard against tyranny

Time for a cod history lesson.

When the world was young and all, and America's founders were pondering a system of government, they were equally nervous of royalty and the mob.

It was self-evident that all men - by which they generously meant white, protestant, property-owning men - had the inalienable right of self-government. But they didn't trust them with it. As a result, the government is a complex array of checks and balances aimed at guarding against tyranny and, if necessary, the people.

Not trusting the mob to directly elect a head of state, an intervening electoral step was created - a group of people selected by each state to choose on that state's behalf. Each state gets to decide how to choose its own college of electors. There needn't be an election, that's just how the various states have all done it since the late 19th century.

Incredibly though, the presidential election isn't binding on the state colleges who can still vote any way they please. There have apparently been 157 occasions of 'faithless electors' but none have affected the outcome. Most recently, a Washington DC elector abstained in 2000.

Some states make no demands on their electors, some have laws to punish the faithless, and some declare that a faithless elector's vote would be void. The Constitution doesn't comment. There is potential for a nightmare of squabbling and lawyers if the electors went rogue en masse.

The opportunity to differ from the rabble's intent is surely the very intent of the college, with the electors making a wiser choice on their state's behalf, or stepping in to ameliorate a populist one. 2016 could be the sort of outcome the framers intended to avoid.

In practice, if you win a state, you win all of its electoral college, except in Maine and Nebraska where they are split by congressional district. The number you win for each state is proportional to its size, ranging from 3 to 55. 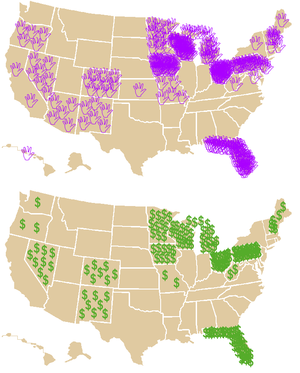 Pictograms of how much time and money was concentrated on a handful of battleground states during the final five weeks of the 2004 election campaign. Each hand is a visit to the state by the VP candidate. Each dollar sign is a million dollars spent on TV advertising. Photo: Wikimedia

Most states are typically a foregone conclusion as either Democratic or Republican strongholds. Their electoral votes are taken for granted and the election war barely alights on their soil.

Which leaves a handful of states that could go either way. They are called the 'battleground states' and the name is appropriate. The candidates will make dozens of trips and spend tens of millions of dollars trying to move public sentiment or alter turnout just a few degrees, because just a nudge might be all that's required to carry the state and the country.

This is why the only polls worth considering are for who will win a state, especially a battleground state. The very close states in the 2012 election (with a spread of less than 5 percent) were Florida (29 electoral votes), Ohio (18), North Carolina (15), and Virginia (13). They are the most likely to be fought over tooth and nail for their total 75 electoral votes.

Other factors (changing demographics, suppressed turnout, demagogic appeal) will also bring some of the competitive states from four years ago into close contention. These include Pennsylvania (20), Michigan (16), Georgia (16), Arizona (11), Minnesota (10), Wisconsin (10), Missouri (10), Colorado (9), Nevada (6), Iowa (6), and New Hampshire (4) - total 172 votes. But more on those factors another time.

There are myriad combinations of states a party can win to reach the magic number of 270 electoral votes. If you want to try juggling the electoral maths of possible combinations you can make your own electoral map, or look at how state loyalties have shifted across history.

One final note - even those key state polls are not quite ready for your attention yet.

While Republican sentiments have had a month to solidify around Donald Trump, voters who tend to the left are still emotionally split between two candidates and this will lower Hillary Clinton's numbers in a Trump versus Clinton match-up until August or so, when sentiments settle, battle lines are drawn and more undecided voters will start entering the fray.